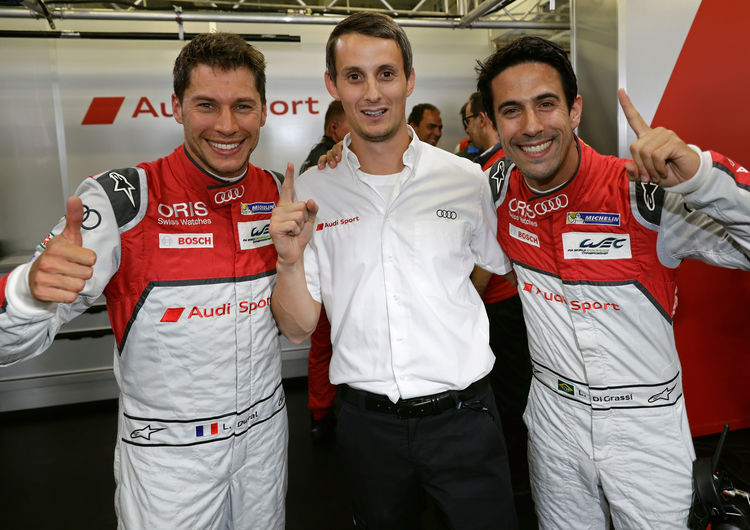 Silverstone, Nürburgring, Mexico City: Having set the fastest time in qualifying for the third time this year, Audi is the best brand in the qualifying sessions of the FIA World Endurance Championship (WEC) to date. For the first time this season the number 8 Audi R18 will be starting the 6-hour race from the top spot on the grid.

On Friday, the FIA WEC saw an action-packed qualifying session which gave a foretaste of a gripping race. Lucas di Grassi (BR) and Loïc Duval (F) in the battle for position one secured an advantage of just 42 thousandths of a second. “Starting the second half of the season full of energy has paid off,” said Head of Audi Motorsport Dr. Wolfgang Ullrich. “Our guys created a good starting base for the race and improved by one point in the standings today as well. In the practice and qualifying sessions, the Audi R18 proved its performance capability over the distance too. In the race, it’ll be crucial to avoid contact with other cars. Audi will definitely be in contention for victory on Saturday.”

Lucas di Grassi was happy about his first pole position with Audi. “I had a clear track and was able to extract everything from the car,” said the Brazilian. “We owe our grid position to a strong performance by the whole squad.” Loïc Duval added: “The result shows how well Lucas, Oliver Jarvis and I have gelled as a team. On setting his superb time, Lucas laid the foundation for our grid position.”

The sister car, number 7, which had started the Silverstone and Nürburgring races from pole position, had to admit defeat by 0.281 seconds and will start from position three. André Lotterer (D) on his first outing achieved the fastest lap of all drivers of 1m 24.763s. “I’m happy even though I could have done a little better in the first sector. I made another attempt afterwards but didn’t improve anymore.” His teammate Marcel Fässler said he didn’t find an ideal rhythm on the 4.304-kilometer track. “On my first lap, I made sure not to overtax the car, but the time was not good enough, so I wanted to up the ante but, unfortunately, made several small mistakes in the process,” said the Swiss.

Both Audi R18 cars were the only race cars in the field with fastest lap times better than 1m 25s. On Saturday, the teams will be tackling a great challenge. Autódromo Hermanos Rodríguez is located on an altitude of nearly 2,300 meters. The air is much thinner there than at sea level. Audi has technically adapted the R18 while the drivers will be subjected to major physical strains during the 6-hour race. As Benoît Tréluyer is skipping the race in order to regain his full physical fitness following a bicycle accident, Fässler and Lotterer are going to contest the event as a team of two. Work in the sister car will be shared again as usual by the three Audi drivers di Grassi/Duval/Jarvis.

The race will start at 13:30 local time (20:30 CEST). Eurosport will air full-length coverage of the 6 Hours of Mexico live and free of charge in Germany: http://video.eurosport.de/wec/video-live.shtml