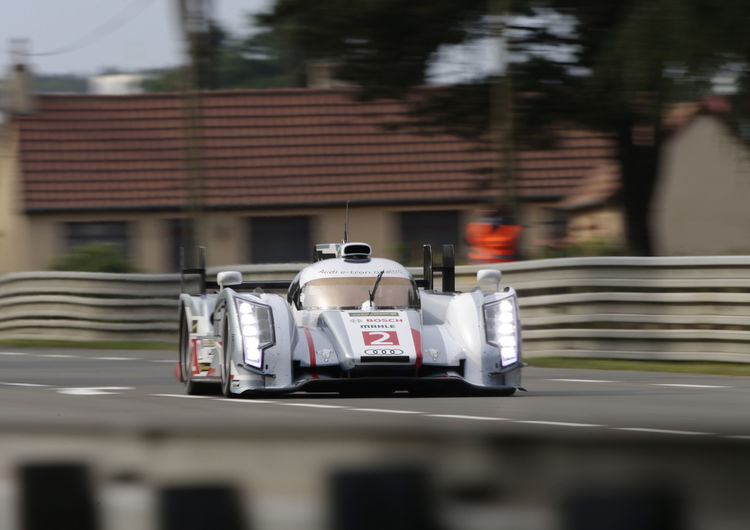 After a shortened first day of practice for the anniversary event of the Le Mans 24 Hours (start on Saturday at 1500 CEST) all three Audi R18 e-tron quattro cars are at the front of the field. The Frenchman Loïc Duval managed to beat the best time from last year by almost 1.5 seconds.

The hybrid race cars with the four rings, which have been undefeated in the current season so far, dominated on the 13.629-kilometer track in Western France on Wednesday right from the beginning. In free practice and in qualifying, Audi maintained the top three positions. The fastest in both qualifying sessions was the number ‘2’ Audi R18 e-tron quattro driven by Loïc Duval (France), Tom Kristensen (Denmark) and Allan McNish (Scotland). The best time of the day of 3m 22.349s was achieved by Loïc Duval shortly after qualifying started at 22:00.

But none of the three Audi squads was mainly focused on the chase for fast lap times on Wednesday. Following the predominantly rainy pre-test on Sunday before last, Audi Sport Team Joest continued the test program that had been started then, focusing on tire tests and a perfect race set-up of the three R18 e-tron quattro cars. In addition, all drivers tried to do the mandatory laps at night. All, except for Marcel Fässler, who was stopped twice by red flags, managed this.

Both the free practice and the first qualifying sessions were stopped early after incidents in which the guard rails of the race track were damaged – qualifying even ended as early as after 65 minutes of the originally scheduled two hours.

“Still, we basically completed our work tonight as planned,” said Loïc Duval, who celebrated his 31st birthday last week. “Our plan was to reel off a real qualifying lap on a dry track as well – you never know what the weather will be like tomorrow. I caught a lap without traffic. But our car isn’t perfect yet simply because the track conditions aren’t so conclusive yet. At this point in time, the outcome after the final qualifying session on Thursday is still completely open.”

“It’s nice that the race week has finally begun for good,” said Head of Audi Motorsport Dr. Wolfgang Ullrich. “The weather conditions were better today than expected so that we were able to work well. Unfortunately, there were two longer interruptions because the track had to be repaired after accidents. That’s why we’re hoping to be able to make optimum use of tomorrow for checking off the final details we’ve got on our action list.”

From 19:00 to 21:00 and from 22:00 to 24:00 two further qualifying sessions are scheduled at which the the final grid positions will be awarded. To date, Audi has started from the pole position seven times at the Le Mans 24 Hours, which celebrates its 90th anniversary this year, and has won the world’s most important endurance race eleven times at 14 runs.