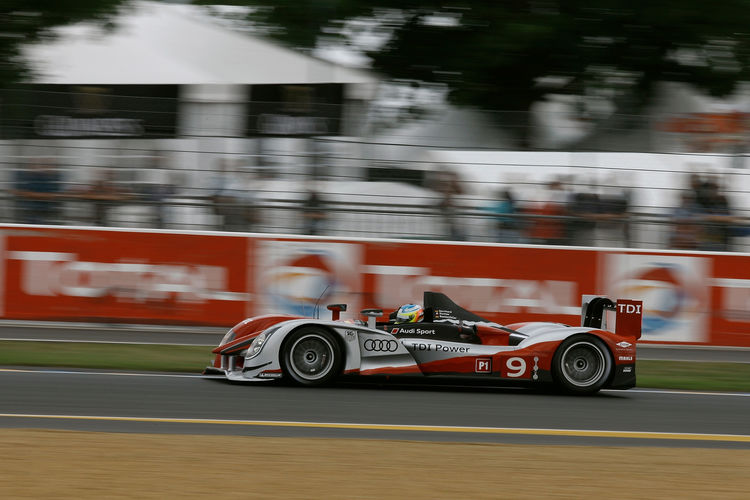 Audi Sport Team Joest fully concentrated on race preparations at the Le Mans 24 Hours on Wednesday and Thursday. The three Audi R15 TDI cars did not actively participate in the chase for times in qualifying. Instead the Audi squad used every available minute to fine-tune the set-up of the cars for the race.

The three Audi R15 TDI cars will start the race on Saturday at 3 p.m. from positions five (Timo Bernhard/Romain Dumas/Mike Rockenfeller), six (Dindo Capello/Tom Kristensen/Allan McNish) and seven (Marcel Fässler/André Lotterer/Benoît Treluyer). All three vehicles completed programs prescribed by the engineers and technicians in order to gather as much data as possible and to test tires. “On Wednesday, we weren’t quite where we wanted to be but on Thursday we made good progress,” explained Head of Audi Motorsport Dr. Wolfgang Ullrich. “At Le Mans, speed isn’t the only thing that counts. It’s important to have vehicles with good drivability and, above all, efficiency as well. This is what we’ve been concentrating on.”

The 2010-specification Audi R15 TDI, which bears the internal project name “R15 plus” is slightly faster than the R15 was last year despite the restrictions imposed by the regulations. “In addition, we now know that the R15 plus is pretty efficient in terms of tire wear and fuel consumption,” said Dr. Ullrich. “And all three vehicles were running absolutely reliably in qualifying – which is another very crucial factor at Le Mans.”

The fastest time within the Audi squad was set by Mike Rockenfeller in the Audi R15 TDI designated as car number 9 on Thursday night. The German almost exactly matched the time of 3m 22.2s the Audi technicians had calculated in simulations. The other two Audi R15 TDI prototypes also improved their lap times in the final qualifying session. “This is especially nice because all cars were already fitted with the same engines which will also be used in the race,” explained Ralf Jüttner, Technical Director of Audi Sport Team Joest. “And on the damp track at the beginning our cars were also consitently fast.”

Audi won the Le Mans 24 Hours eight times in the past ten years and this year has the chance to equalize Ferrari’s ranking in the honor roll. Only Porsche’s track record reflects more victories.

Before the race starts, the five-time Le Mans winner Frank Biela will pilot an Audi-e-tron technological show-piece based on the R8 around the race track. As part of the “Le Mans vers le futur,” a demonstration drive for cars with alternative powertrains, the test vehicle will prove that it belongs to the top league of e-sports cars. Not one but four motors – two each on the front and rear axle – power the wheels of the Audi e-tron and make it a genuine quattro. The Le Mans regulations will also allow additional electric engines at the front axle from 2011 on.

For the start of the race, the organizers, the Automobile Club de l’Ouest (ACO), have come up with a special attraction: prior to the start of the formation lap, the drivers will run from the opposite side of the race track to their vehicles, which are lined up along the pit wall. The run pays homage to the classic “Le Mans start” at which the drivers would sprint to their cars. Allan McNish (#7), Marcel Fässler (#8) and Timo Bernhard (#9) have been nominated as starting drivers of the three Audi R15 TDI prototypes.

The complete race will be broadcast live on Eurosport 1 and 2. The “Audi Sport” iPhone App provides current info, photographs, sound bites and a live ticker. At www.audi.tv the Le Mans 24 Hours can be exclusively watched live from the cockpits of the three Audi R15 TDI cars. After the end of the race, Audi tv will air the highlights of the weekend in a special program.


The starting grid at Le Mans