Audi A5 DTM ready to start from the grid 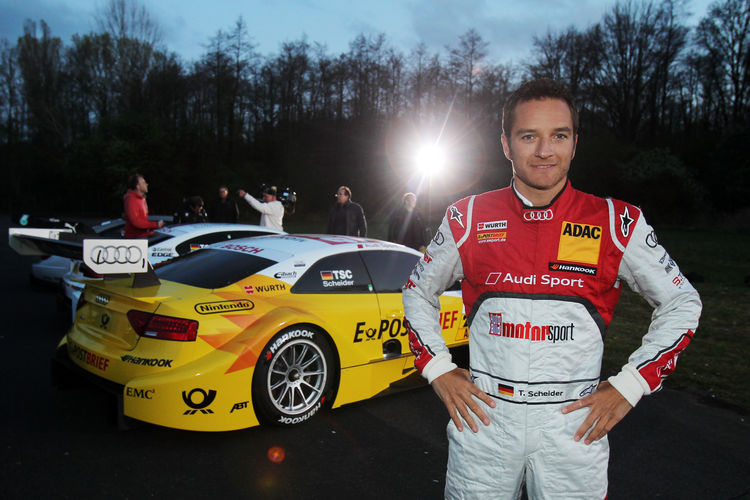 The time has come: The 26th DTM season starts at the Hockenheimring on Sunday. For the new Audi A5 DTM and its competitors, the start can be decisive. The two-time DTM Champion Timo Scheider talks about the art of starting in the DTM.

2 p.m. on Sunday: The start is arguably the most thrilling moment of any DTM weekend. The fans in the stands watch with bated breath while millions of TV viewers are just as glued to the screens as the crews in the pits are. And the pulse of the drivers in the cockpits of the DTM vehicles rises to as much as 160 beats per minute when the red starting lights come on.

The start can decide a DTM race. It can ruin the advantage of a pole position, prepared for in practice sessions and achieved in qualifying, in merely fractions of a second, or it may give a driver what may prove to be the crucial lead while heading for the first turn. “The start poses a new challenge again and again, and it produces a huge adrenaline surge,” says the two-time DTM Champion Timo Scheider. “You can never predict what will actually happen. The start may be superb or catastrophic. With a perfect start you can make up a lot of ground from a poor position – or lose everything from a good place on the grid. That’s why ‘practice, practice, practice’ is the word. And even then mistakes will happen. I think that even though I may be driving for many, many more years the tension at the start will always be there.”

If everything goes off perfectly, an Audi A5 DTM accelerates in less than three seconds from rest to 100 km/h. To make this happen, the process is practiced over and over. During winter track tests as well as in starting practice sessions at the end of the pit lane on DTM weekends.

Audi has perfected the technique of starting over the past few years – despite very restrictive regulations, which exclude almost all technical aids that would simplify the starting process. Perfectly functioning technology is a basic prerequisite nonetheless. On the way toward his champion’s title last year Martin Tomczyk, for example, had a new clutch installed before each race – this was the only way he felt he could be sure to have exactly the right feeling for the sensitive technology.

The starting procedure is complex and demands a lot of intuition and full concentration on the driver’s part. It starts by precisely positioning the car within the markings provided on the track. The vehicle engineer assists in this by radio. The driver then activates the handbrake – not by using a lever behind the steering wheel as was the case with the predecessor model, the A4 DTM, but by pushing a button on the steering wheel.

Once the brake circuit is closed the driver can put the car into first gear and slowly release the clutch. “Preloading” is the word DTM drivers use for this action. And preloading typically takes place when the first red starting light comes on. “At some point you feel by the drop in engine speed or the squatting of the car that the clutch is slowly starting to engage,” says Timo Scheider. “That’s when we have to depress the gas pedal a bit more to keep from stalling the engine and then maintain the position of the gas and clutch pedals. When the third red light goes on I start to build up the right rpm. You’ve got to be sure not to do this too early though. The tricky part about it is that you never know how long the light system will take to switch from red to off.”

At the first moment of driving off, the driver merely releases the handbrake button. The positions of the feet on the gas and clutch pedals remain unchanged for the first few meters in order to drive off with as little wheel spin as possible. “Only from a speed of 50, 60, 70 km/h on, depending on the grip conditions of the track, you completely let go of the clutch and accelerate as hard as you possibly can,” reveals the seasoned DTM campaigner. “After that, it’s all about defending your position or finding the right gap. You intuitively shift through the gears. I only notice the shifting lamps on the fringes.”

Sometimes the DTM Champion would like to have the launch control system the sporty Audi models with S tronic transmissions are equipped with, which makes driving off from a traffic light an almost fully automatic event with perfect acceleration. “Especially when you’re on pole the pressure of not losing your top spot is very high,” Scheider says, speaking from experience. “I’ve also been the victim of wanting too much on occasion so that I’d stall the engine during preloading – or had too much wheelspin.” So, the human factor remains the one that ultimately makes the difference at a DTM start.

Tickets for the 2012 DTM are available at the Audi Ticket Shop on the internet at www.audi.de/dtm. The ARD will cover the race live from 13:40 hrs (local time) on Sunday.