Audi A4 DTM on its first trip around the world 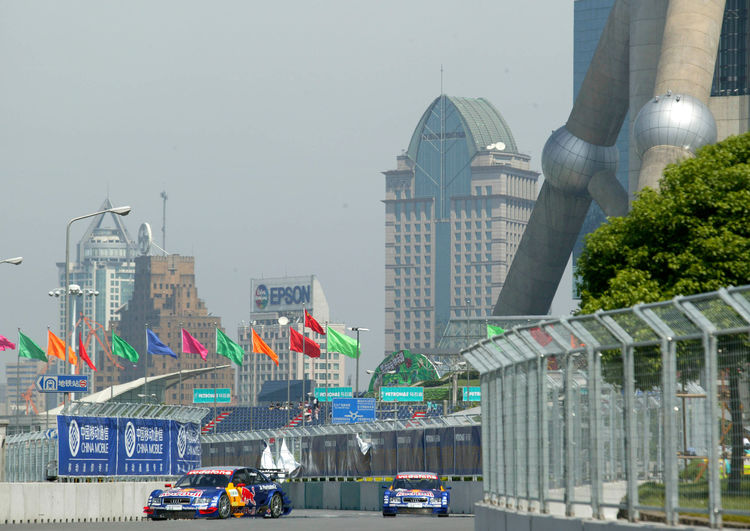 The landing at Pudong Airport in the south of Shanghai was gentle and without any problems: on Saturday afternoon, the seven Audi A4 DTM cars and an Abt-Audi TT-R arrived in China, now being held in the paddock, awaiting their first overseas stint at the 2.85-kilometre track. On Sunday, the touring cars adorned with the four rings and delivering more than 460 hp will be among the protagonists in the DTM invitation race staged in the Asian metropolis. The two races, each lasting 30 minutes, will start at 1.10 p.m. and 3.15 p.m. local time, respectively, with live TV coverage provided in both Germany and China. The realisation of the spectacle in the heart of the city required the largest logistical effort in the DTM’s history so far.

Whilst planning for the event had started several months ago, preparations entered into the “hot phase” during the past week and a half: on 1 July, the chartered carrier took the total of nine freight containers to Kempten and Waldmichelbach, Germany, the home bases of the two works teams, Audi Sport Team Abt Sportsline and Audi Sport Infineon Team Joest. The mere task of compiling the bills of lading turned out to be a gigantic project: to assure that the parts – from spare engines and bonnets all the way to the mechanics’ ear plugs – would be clearing customs without any problem at the other end of the world, each single bolt had to be listed. Not counting the car itself, roughly two and a half tons of material were accumulated per vehicle. Altogether, Audi started off to their journey with 22 tons of “luggage”.

After two days of loading, the precious cargo was taken to Frankfurt by truck along with the competition cars, which were shipped without enjoying the protection of steel containers, though: at Frankfurt airport, all cars were mounted on special steel transport panels prior to being loaded directly into the cargo bay of a Boeing 747 – and being returned to the mechanics after a twelve-hour flight. To everyone’s relief all the vehicles and components survived the trip without a single scratch. Some of the racing cars had gone on the flight, stacked in “double-decker” style. To assure that the A4 would fit into the round fuselage of the aircraft, certain front and rear body components had to be dismantled.

Audi are contesting the “Pe-tronas Shanghai International Race Festival 2004“ with six Audi A4 cars which, as in the DTM, will be driven by Christian Abt, Frank Biela, Mattias Ekström, Tom Kristensen, Emanuele Pirro and Martin Tomczyk. In addition, both works teams are fielding another A4 for Rinaldo Capello as well as an Abt-Audi TT-R from last year for Peter Terting. The Audi squad have also taken the racing taxi along to give guests a first-hand impression of the DTM thrill, and an Audi S4 to be deployed as the Safety Car on the narrow city circuit. Prior to these shipments, an Audi 90 IMSA-GTO from the 1989 season, the Le Mans-winning R8 as well as the Audi Le Mans quattro concept car had been taken to China for demonstration laps on the new Formula 1 circuit.

The DTM not only travelled to China by air, though: in middle of June, Dunlop had shipped more than 800 slicks and wets, the tyres with which all DTM teams are equipped, from the port of Rotterdam, the Netherlands, to Shanghai. Shell, as well, had opted for ocean freight to ship 7,800 litres of Shell V-Power, the standard fuel used in the DTM, to the venue of the series’ first overseas performance.

The Audi squad itself travelled to China in separate groups: the managers of both works teams and project manager Volker Nossek arrived in Shanghai at the beginning of the week to accompany the material transports to the race track – and this was certainly no mean feat: instead of the three hours scheduled for loading the parts and vehicles onto 18 semi-trailers, the loading took twelve. Not until the late evening hours, the convoy moved towards the centre of the city, and unloading the cargo took until the early hours of the next morning. The mechanics and members of Audi Sport boarded their aircraft to fly east on Tuesday morning, while the Audi drivers will be arriving in Shanghai on Thursday. Altogether, Audi are deploying 75 people to China.

Meanwhile, the local organisers have done a great job creating perfect working conditions for their guests from Germany: the construction work on the circuit has been completed, and the 2.85-kilometre track is surrounded by safety fences and concrete barriers. Merely one major intersection will be kept open for public traffic until the action starts on Friday. For each car, the mechanics have been given a 50-square metre pit to prepare the A4s and the TT-R for the pinnacle of the weekend, the races on Sunday. These will by no means mark the end of the squad’s work, though: on Monday, already, the vehicles and teams will be setting off for their 6000-kilometre journey back to home base. And time is pressing, as only a week later, the trucks will be on their way to the sixth round of the DTM season at Germany’s Nürburgring.