All eight Audi RS 5 DTM cars in the top ten 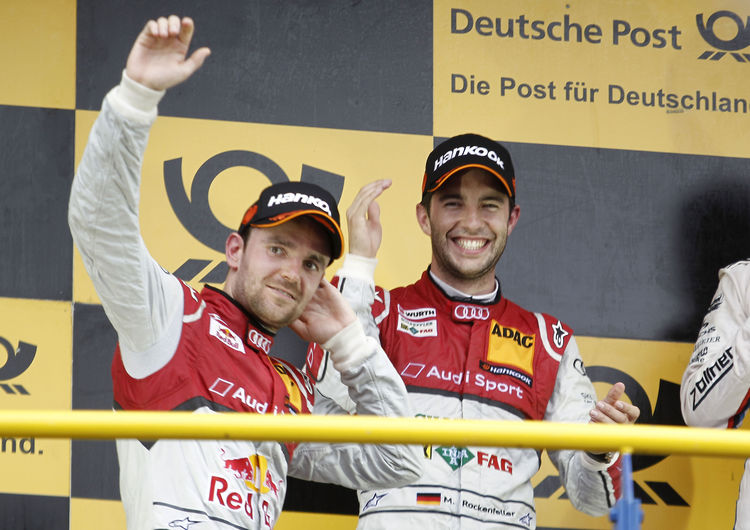 With a second-place finish at Oschersleben Mike Rockenfeller (Schaeffler Audi RS 5 DTM) has made another big step toward the Champion’s title. Before the last two races at Zandvoort and Hockenheim the driver from Audi Sport Team Phoenix has a 33-point advantage over Augusto Farfus (BMW).

70,500 spectators (throughout the weekend) witnessed another flawless race of the leader of the standings and an impressive showing of the entire Audi squad at the venue near Magdeburg. All eight Audi RS 5 DTM cars finished in the top ten and thus in the points – a premiere.

Before the race at Oschersleben, eight drivers still had title chances. Now, only two are left: Rockenfeller and Farfus. The Brazilian was the only rival Rockenfeller had to admit defeat to. “He was extremely strong today,” commented the Audi driver. “On the option tires I was running relatively fast while things weren’t going quite as well on standard tires – that’s why I’m particularly pleased with second place and the important points we scored here again.”

Rockenfeller started on harder standard tires and in the early phase initially dropped back to fourth place. On the softer option tires, he subsequently improved to position two and brought the 18 points for the Championship home in typical, commanding style.

Jamie Green in the Red Bull Audi RS 5 DTM of Audi Sport Team Abt Sportsline achieved his first podium result as an Audi driver. The Briton made a good start but in the narrow first turn had to yield to the subsequent winner Farfus. After his second pit stop he hit the track again directly behind Rockenfeller and crossed the finish line in third place right behind the leader of the standings.

For the first time in the points this season was Filipe Albuquerque, who in the Audi Financial Services RS 5 DTM of Audi Sport Team Rosberg drove a strong race which he finished in fourth place. In fifth place, Timo Scheider in the AUTO TEST Audi RS 5 DTM managed to score his best result of the season as well. The two-time DTM Champion showed remarkable overtaking maneuvers, battling his way forward from ninth on the grid to fifth and thus into the top ten.

Even more cars were overtaken by Mattias Ekström, who in his Red Bull Audi RS 5 DTM chose a different strategy than most of the other drivers, initially fitting standard tires twice. Toward the race’s midpoint the Swede switched to option tires and subsequently recovered one position after another. Having started from grid position 13, Ekström thus finished in seventh place.

Dieter Gass, Head of DTM at Audi Sport, was pleased accordingly, as he commented: “This was the solid team performance we’d been wishing for. All eight Audi RS 5 DTM cars in the points – that’s never happened before. Obviously, we’d have liked to have won the race here as well but, more importantly, Mike Rockenfeller made another big step forward in the Championship. He’s now got an advantage of 33 points and only one rival left. But there are 50 points yet to be awarded. We’re going to continue to work with concentration in order to clinch the title.”

In just two weeks from now, at Zandvoort (Netherlands), the next race will be on the agenda. There, Mike Rockenfeller could secure an early title win. In the manufacturers’ standings, Audi, after the strong result achieved at Oschersleben, has a score of 267 points, trailing BMW (276) by only nine points and clearly ranking ahead of Mercedes-Benz (237).