Skip to content
We are using cookies for a better user experience.
07/07/19
Vila Real/Neuburg a. d. Donau
Sport

30 points for Audi Sport in Portugal 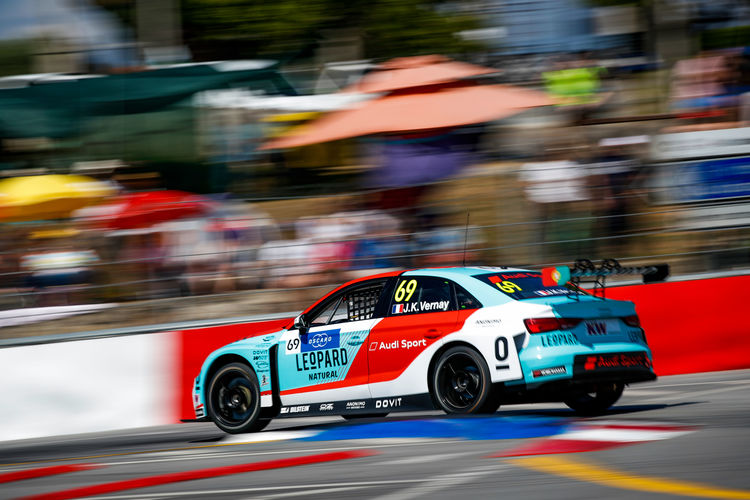 Audi Sport customer racing managed to end a difficult sixth race weekend in the WTCR – FIA World Touring Car Cup on a positive note. Jean-Karl Vernay achieved a fourth and a fifth position in the two races in Portugal on Sunday. As a result, the Frenchman from Leopard Racing Team Audi Sport moved up from eleventh to ninth position in the standings, now ranking two points behind his fellow Audi Sport driver Frédéric Vervisch.

The weekend had begun badly for Vernay and his fellow Audi Sport drivers. In eleventh position, the Frenchman was the best driver of an Audi RS 3 LMS on the grid for race one. However, Vernay lost tenth place in the race retroactively, just like Frédéric Vervisch from Comtoyou Team Audi Sport, who was disqualified from position 20. In both cases, the teams were accused of charge pressure peaks of the turbo engines having exceeded the tolerances at individual measuring points. “Our teams have decided to lodge an appeal in order to exercise their rights and to obtain professional coordination with the FIA to clarify the facts and circumstances,” said Chris Reinke, Head of Audi Sport customer racing. “In the light of these events, I was all the more pleased about the responses given by our drivers and teams in the on-track competition on Sunday.”

In the second qualifying, Jean-Karl Vernay in sixth position was again the best Audi driver. As a result, he started race two in fifth. Thanks to a successful Joker Lap, on which every driver had to race around a traffic circle counter-clockwise once, Vernay gained one position. Consequently, in fourth place, he equalized his so far best race result this season. The Belgian Audi Sport driver Frédéric Vervisch, from 13th on the grid, made up one position in the race, while his Dutch teammate Niels Langeveld advanced from 24th to 18th place. Gordon Shedden achieved position 21 with Leopard Racing Team Audi Sport.

Race three again saw two Audi Sport drivers make up ground on the narrow city street circuit: Vernay advanced from sixth on the grid to position five. Niels Langeveld in his debut in Vila Real improved once again, from 26th to 16th place. Like previously, in race two, no other driver made up more positions in the race than the Dutchman did.

Following a ten-week summer break, the FIA WTCR will race at the circuit of Ningbo in China from September 13 to 15, followed by three rounds in Asia. In December, the finale in Malaysia will conclude the 2019 season.