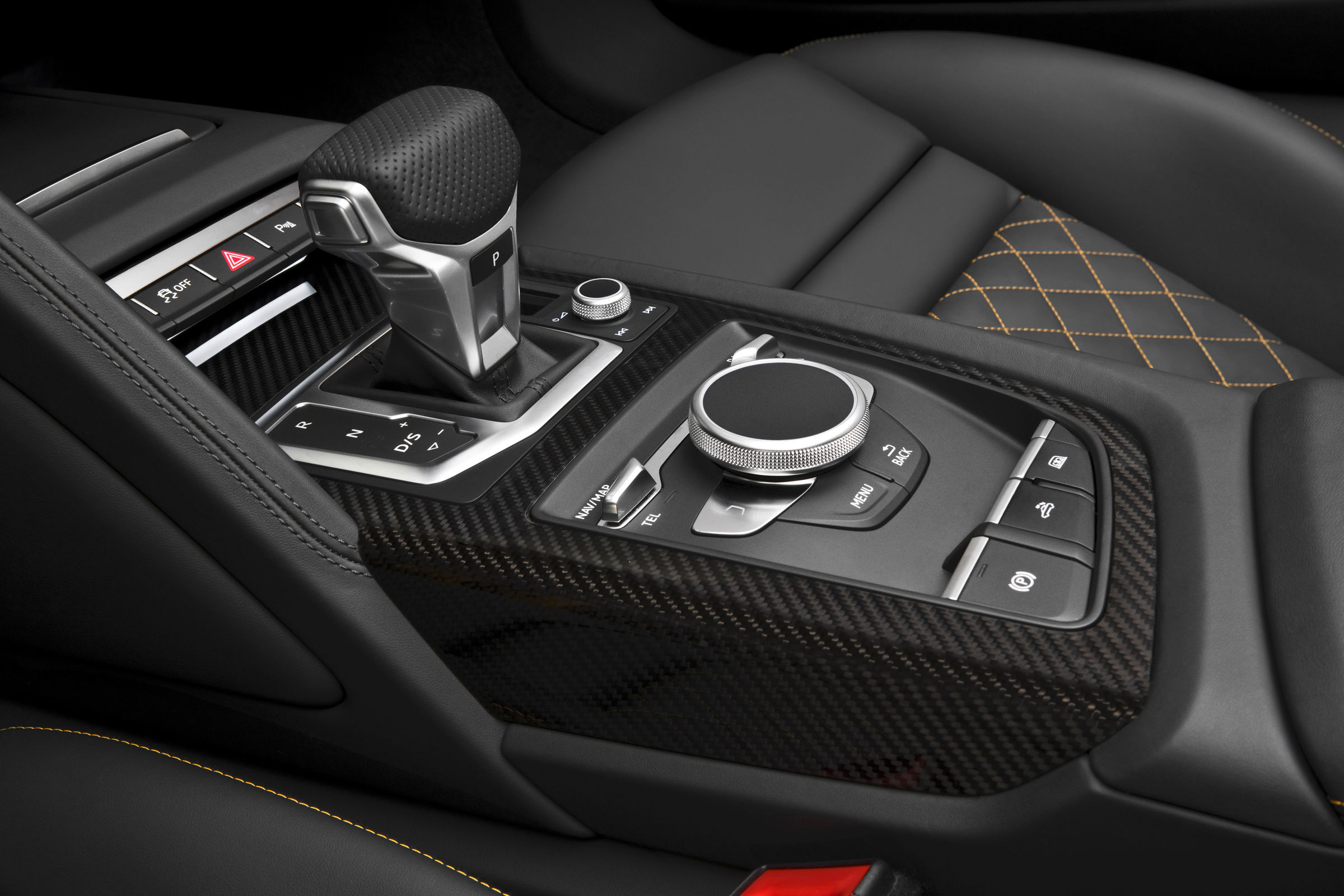 Among the highlights on the list of standard equipment in the new R8 Spyder* is the MMI navigation plus with MMI touch – a versatile infotainment control center. It integrates a touchpad on the rotary pushbutton that the driver can use to write, scroll and zoom in on the navigation map. Like in a smartphone, the operating logic is structured in flat hierarchies, including MMI search. It is available for all basic menus and generally answers queries after just a few letters have been entered.

Vehicle functions can be controlled from the steering wheel, the MMI terminal on the center tunnel console or by the natural voice control system, which can already process simple commands and questions. Three small microphones in the seatbelts make telephony and the voice control system particularly convenient and ensure top quality. The infotainment system also includes a WiFi hotspot that passengers can use to surf the World Wide Web with their mobile devices.

MMI navigation plus also has a Tegra 30 chip working in the background. It collaborates with its counterpart in the Audi virtual cockpit in a cycle measured in the thousandths of a second. The process is part of the second-generation Modular Infotainment Platform. Thanks to its highly flexible concept, Audi can quickly implement innovations from the consumer electronics industry in the automobile.

Well connected: Audi connect and the Audi MMI connect app
The perfect counterpart to MMI navigation plus is the Audi connect module, which gets the open two-seater on the Internet via LTE and gives access to a wide range of services. The portfolio ranges from navigation with Google Earth and Google Street View to travel, traffic and parking information. In addition, drivers can access their Twitter account and call up online news. Information is displayed in the Audi virtual cockpit and operation is via the MMI system.

The same is true for the diverse functions of the free Audi MMI connect app. It enables online media streaming using the Aupeo!, Napster and web radio services and displays where the R8 Spyder is parked on the smartphone.

Furthermore, the telephone’s appointment calendar can be displayed in the all-digital instrument cluster. The driver can use the appointment location as a navigation destination and save the telephone number of the person to be met as a contact. WiFi is used for the transfer of data from the smartphone to the car.

Debut in the R8 Spyder: the Audi smartphone interface
New to the R8 Spyder is the Audi smartphone interface, which brings Apple Car Play and Android Auto into the car. If the driver connects a suitable iOS or Android smartphone to the USB port, the Audi virtual cockpit displays the smartphone’s contents such as navigation, phone, music and selected third party apps in a separate menu. These can be conveniently used via the multifunction steering wheel, voice control system or the rotary pushbutton.

Acoustic highlight: Bang & Olufsen Sound System including head restraint loudspeakers
An alternative to the standard Audi sound system is one from Bang & Olufsen, in which a 550-watt amplifier drives 13 loudspeakers. The subwoofer is located at the bulkhead in the right front wheel well. The woofers are mounted in the doors with anodized aluminum trim brackets. When it is dark, they are illuminated by LED accent lighting. Two of the

13 loudspeakers are integrated into each of the head restraints of both the R8 sport seats and the R8 bucket seats. The Symphoria algorithm that Audi developed in collaboration with the Fraunhofer Institute adds great width and depth to the sound. It thus conveys an excellent impression of space.