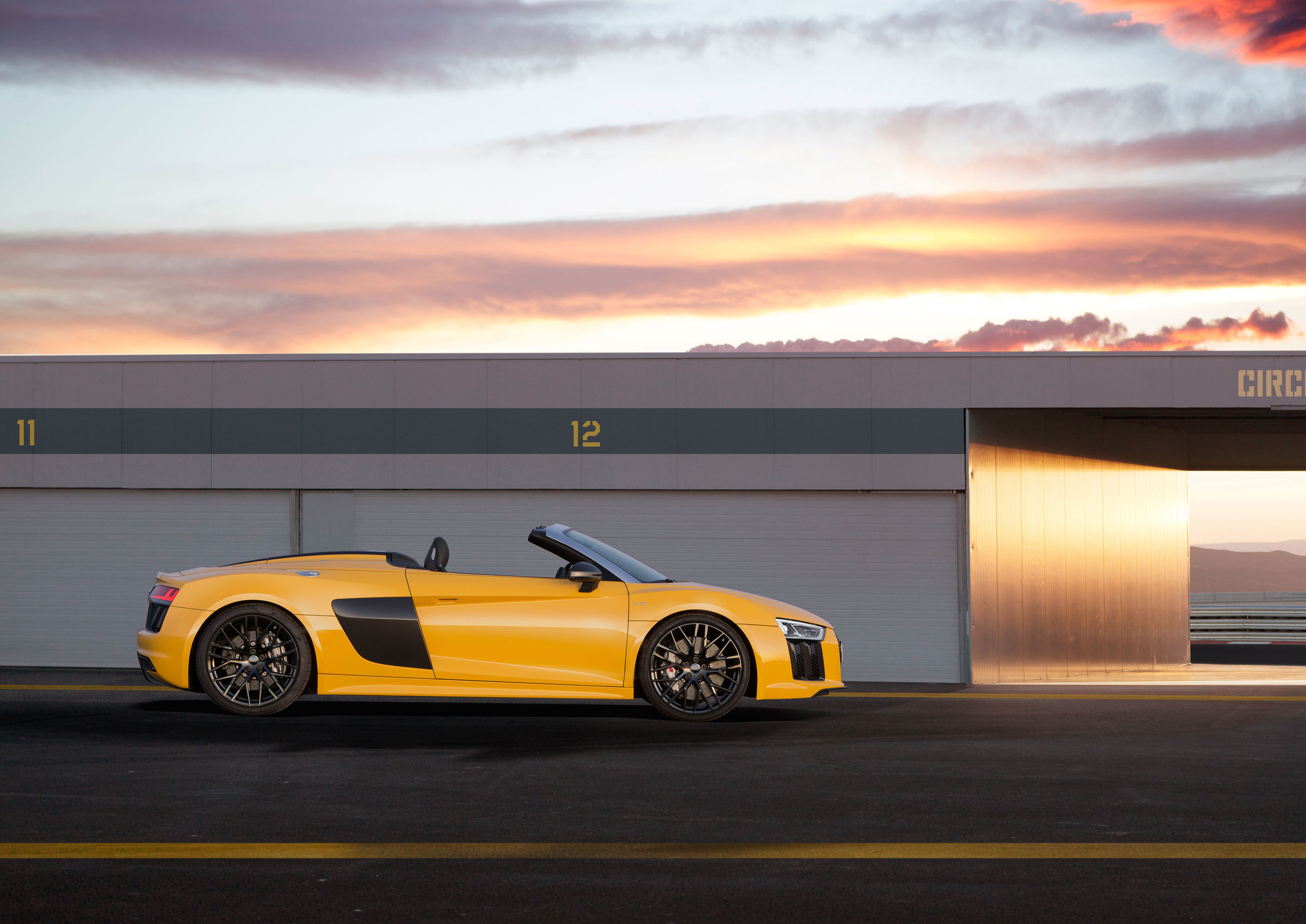 The dynamic character of the new Audi R8 Spyder V10* is immediately apparent at first glance. The forward position of the passenger compartment, the highly accentuated wheel arches and the long back define the classic silhouette of a mid-engine sports car.

Striking details: sideblades and diffuser
Horizontal lines characterize the front view, as does the wide and low Singleframe with its honeycomb grille. Sculpted surfaces connect it to the wedge-shaped headlights. The contours above the wheels are a cue to the quattro drive; the sideblades, which have been updated from the previous model, set bold accents.

The aluminum tank cap bears an embossed logo. After opening the cap, the driver can insert the fuel nozzle directly into the tank neck. Just like with a racing car, there is no fuel cap to unscrew.

The concept of emphasized horizontals also gives the rear a wide, athletic look. Trapezoidal exhaust tailpipes, optionally with glossy black tips, flank a diffuser with vertical ribs. The engine compartment vents and the LED rear lights refer visually to one another; the forked contours of the lights create a distinctive red light signature. Each rear light includes 118 individual LEDs that produce an absolutely homogeneous light.

Top visibility in the dark: Audi laser light
37 light-emitting diodes in each of the headlights of the new R8 Spyder produce a bright LED light that can be augmented with the optional Audi laser light. A module with four high-power laser diodes, each of
which is just 300 micrometers in diameter, emit a blue laser beam with a wavelength of 450 nanometers. A phosphor converter converts it into white light with a color temperature of 5,500 Kelvin, which is pleasant to the human eye.

The Audi laser light, which is activated at speeds of 60 km/h (37.3 mph) and above in extra-urban areas, increases the range of the high beam and thus provides the driver with added visibility and safety. An intelligent camera-based sensor system detects other road users and actively adjusts the light pattern to dim the light intensity specifically for them. The presence of the Audi laser light is indicated by the lighted, anodized blue strips dividing the headlights. It is combined with dynamic turn signals up front, which run from the inside out with a cycle time of 400 milliseconds. This feature is standard at the rear.

As desired: color design
The open-top, high-performance sports car is available in eleven colors, with the new shade Argus brown reserved exclusively for the Spyder. The Audi exclusive program allows customers to mix the paint according to their personal test. The new sideblades are available in a choice of four colors plus a version in high-gloss carbon fiber. Audi also offers the front spoiler, the diffuser, the new sideblades and the frames of the air outlets on the cover of the top compartment and the rear hatch in carbon fiber as an option. The convertible top is available in black, brown or red.