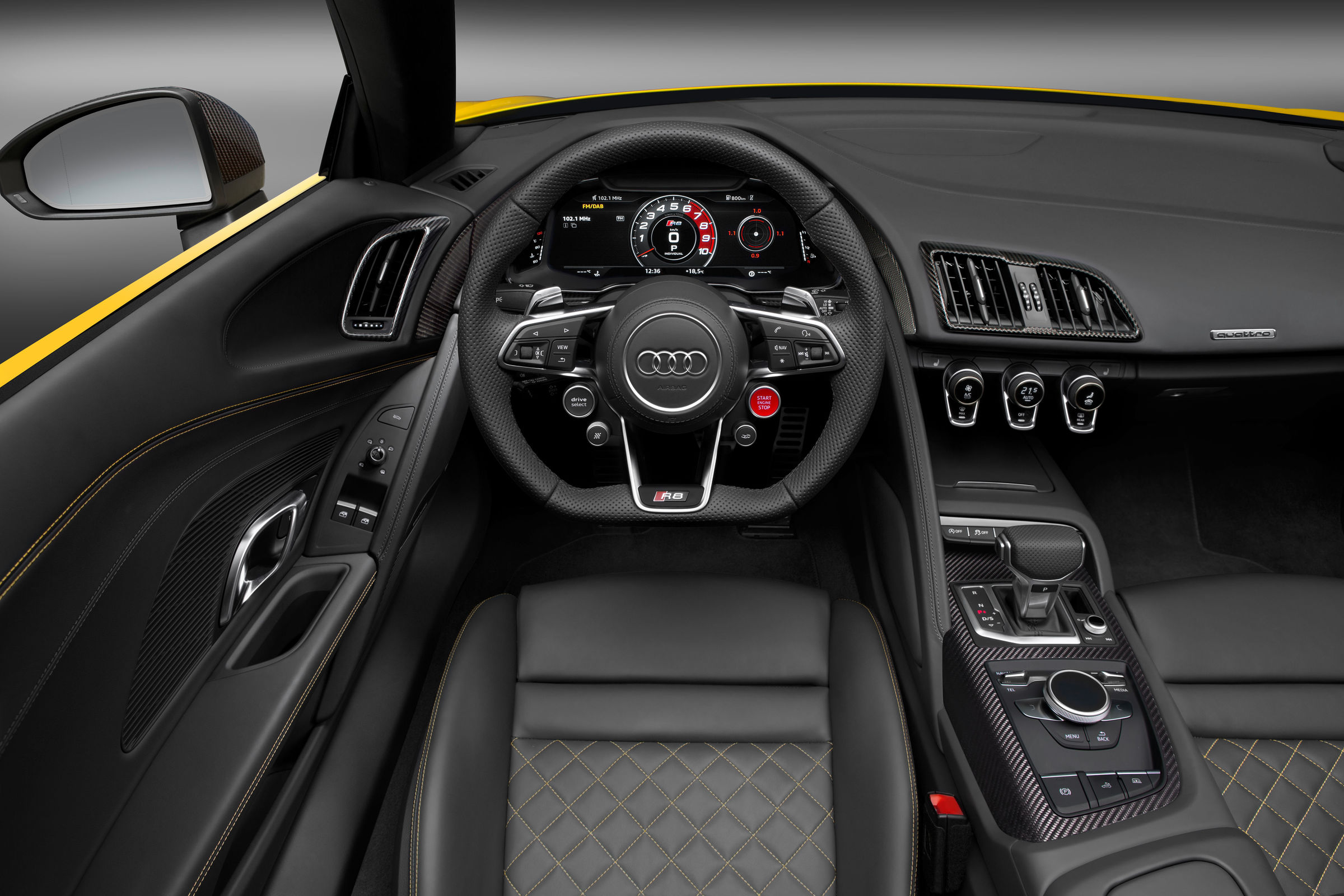 Driving fast demands your full concentration. In the new R8 Spyder*, the control concept is completely focused on the driver. All important functions can be controlled without drivers having to take their hands off the steering wheel or look away from the road. Besides the multifunction buttons for the telephone, navigation, media and the voice control system, the R8 sport leather steering wheel also includes two large satellite buttons. They are used to start and stop the engine as well as to operate Audi drive select. The optional performance leather steering wheel includes two more buttons and a rotary wheel for the performance mode and for controlling the exhaust flaps.

Like in a racing car: the Audi virtual cockpit
The standard Audi virtual cockpit, the fully digital display of the open-top two-seater, displays all information in richly detailed, tack-sharp 3D graphics. Its TFT display has a 12.3-inch diagonal and offers a resolution of 1,440 x 540 pixels. The display varies its context-related color scheme according to the main menu selected. In the Media menu, for example, it is orange, while green is used for the Phone menu.

The driver can switch between the display interfaces by pressing the “View” button on the steering wheel. In infotainment mode, the navigation map or lists from the Telephone, Radio and Audio areas appear in a large central window – while the tachometer and speedometer appear as small dial instruments on either side of this display window. In the classic view, the instruments are approximately as large as analog instruments, and the center display window is therefore smaller.

There is a performance view specially for driving on the racetrack. Here the primary instrument is a central tachometer. It also serves as a gear shift indicator – when the seven-speed S tronic is being operated in manual mode, its scale has a color background at higher engine speeds. Green, orange and red segments are activated as revs increase. As soon as the engine reaches its limit, the entire scale flashes red.

The driver can place other displays to the left and right of the tachometer using the multifunction buttons. The power output and torque of the 5.2 FSI are shown as percentages, and a g-meter, whose peak value is 1.5 g, visualizes the forces acting on the car. A lap timer records up to 99 laps and compares times. The status of important technical components is also displayed – the temperature of the tires, motor oil and transmission fluid as well as tire air pressure.

The heart of the Audi virtual cockpit is a high-performance Tegra 30 chip supplied by Audi joint venture partner Nvidia. It is designed for low electrical consumption and has separate audio, video and image processing units.