{{ activeItem() }}
Twitter
08/09/20
“I was quite pleased with that result. First time in the top 10” – @ReneRastRacing after qualifying. Let’s hear mor… https://t.co/qXDyHmqKyv
08/09/20
1-2-3 victory: Audi Sport driver @vanthoordries1 and @weerts_charles (R8 LMS #32) repeated their victory from Satur… https://t.co/Ode4JQTh3h
08/09/20
Our results after the four qualifying groups finished running here in Berlin. @ReneRastRacing’s best performance so… https://t.co/8sztaZsmec
08/09/20
Qualifying begins at 14:15 CEST. @LucasdiGrassi will run in Group 1, @ReneRastRacing in Group 4. Live stream &gt;&gt;… https://t.co/jXl92QqUGV
Audi Sport on Twitter
{{ activeItem() }}
Facebook
08/03/20
What a start to the DTM season it was for Nico Mueller! Race victory and he is currently leading the drivers’ standings. See how he experienced the weekend in his latest #DriversDiary. >> audi.com/DTM #PerformanceIsAnAttitude #ThanksToDTM
08/03/20
Fourth victory for the Audi R8 LMS in just two weeks, adding to podiums and victories for the Audi R8 LMS GT4 and Audi RS 3 LMS this past weekend. 🇩🇪 🇮🇹 🇺🇸 🇫🇷 >> audi.com/GT3 >> audi.com/GT4 >> audi.com/TCR #PerformanceIsAnAttitude
08/02/20
Another podium lockout for us today! Check out how the second race at Circuit de Spa-Francorchamps has unfolded. >> audi.com/DTM #PerformanceIsAnAttitude #ThanksToDTM
08/02/20
Leading the pack. >> audi.com/DTM #PerformanceIsAnAttitude #ThanksToDTM
Audi Sport on Facebook 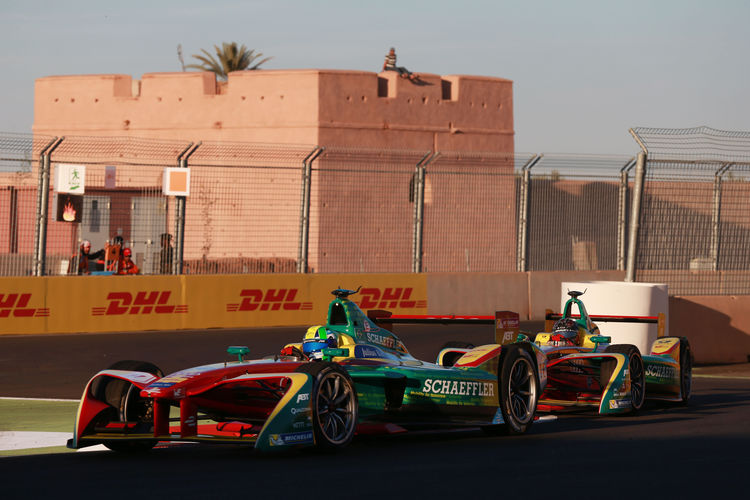 Formula E celebrated a successful African premiere to mark the second race of the season. On the 2.971 kilometer street circuit in Marrakesh on the fringes of the UN Climate Conference ‘COP22’, the ABT Schaeffler Audi Sport team scored a total of 18 points. Daniel Abt – who started the race from fifth place – crossed the finish line in sixth position after 33 laps. For his team mate Audi factory driver Lucas di Grassi, a braking mistake in qualifying left him languishing in twelfth place. Just like the season opener in Hong Kong, the Brazilian shone in Morocco to produce a stirring comeback drive, which saw him take the checkered flag in fifth place. As a result, the 32-year old consolidated second place in the drivers’ classification. The action continues for di Grassi next weekend with the FIA World Endurance Championship WEC finale in Bahrain, which is simultaneously the end of the sportscar era at Audi after 18 years. The third Formula E race for the ABT Schaeffler Audi Sport squad is held in mid-February in Buenos Aires/Argentina.