Links
{{ activeItem() }}
Twitter
09/23/21
MEDIAINFO: 100 days to go until the Dakar Rally: A race against time for Audi Sport &gt;&gt; https://t.co/tNLOfBm45l… https://t.co/xsF4kkNwxL
09/23/21
[1/2] Good luck to the Audi teams: 🇪🇸 @GTWorldChEu Sprint Cup finale at @CircuitValencia 🇩🇪 NLS @vln_de at… https://t.co/vv3SZUrN78
09/21/21
From the USA to Germany, we are welcoming an iconic driver to the Audi family. Get ready for a new type of high per… https://t.co/9jxN8IZset
09/21/21
MEDIAINFO: Welcome! Audi electrifies with U.S. star Ken Block &gt;&gt; https://t.co/8LMhH7KPDe #FutureIsAnAttitude… https://t.co/5G1CPyZm0c
Audi Sport on Twitter
{{ activeItem() }}
Facebook
09/23/21
Under the skin of our new Audi RS Q e-tron. T-100 days until the start of the 2022 Dakar Rally. >> audi.com/Dakar #FutureIsAnAttitude #RoadToDakar #Dakar2022 #RSQe-tron
09/21/21
Racer, drifter, progressive thinker. There is a new face on the block who is ready to redefine high performance. Meet the newest member of our team now >> at.audi/KenBlock #FutureIsAnAttitude #Audi #AudiSport #etron -------------------- This vehicle shown here is the Rally Dakar vehicle that is not available as a production model.
09/20/21
Electrifying and exhilarating. Our partners at FC Bayern München got to experience the Audi RS e-tron GT* with a memorable afternoon at the Audi driving experience center at Neuburg an der Donau. Driving change never looked so fun. Discover more at >> at.audi/fcb-meets-e-tronGT #AudixFCB #FutureIsAnAttitude #etronGT #emobility -------------------- *Power consumption, combined*: 20.2–19.3 kWh/100km (NEDC); 22.5–20.6 kWh/100km (WLTP)CO₂ emissions, combined*: 0 g/km Closed roads/professional drivers,instructors present / do not copy.
09/20/21
Audi Sport Italia is on top of the standings in Italy thanks to another victory with the Audi R8 LMS. Adding to the success was a second overall GT3 triumph in China, a DTM Trophy win with the Audi R8 LMS GT4 and podiums for the Audi RS 3 LMS in four countries – just some of the highlights. Well done to our customers! 🇮🇹 🇨🇳 🇳🇱 🇩🇪 🇳🇴 🇪🇸 🇭🇷 >> audi.com/GT3 >> audi.com/GT4 >> audi.com/TCR #PerformanceIsAnAttitude
Audi Sport on Facebook 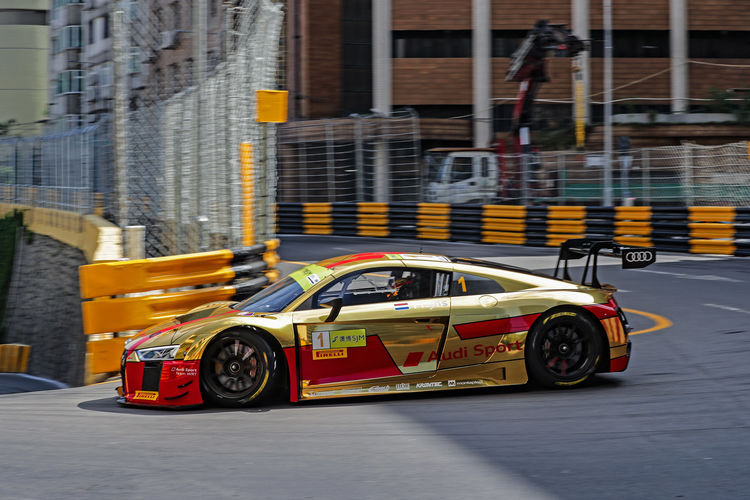 The Audi Sport customer racing teams experienced a chaotic incident in the qualification race in Macau. Robin Frijns from Audi Sport Team WRT was the only Audi driver to finish the round, in position 4, after having started from position 17. On the first race lap, a competitor had an accident which caused a chain reaction of rear-end crashes involving twelve of the 20 cars. The Audi R8 LMS driven by Frijns remained nearly undamaged in the incident and was one of only eight race cars to participate in the restart. Setting the fastest race lap on the tenth of eleven laps, the Dutchman, on making his Macau debut, proved his class once again. By contrast, the other Audi drivers were highly disappointed. The cars of Markus Pommer from Team Aust Motorsport, Lucas di Grassi and Fabian Plentz from HCB-Rutronik Racing, and Nico Müller from Audi Sport Team WRT, were no longer able to race.