A word from ... Markus Winkelhock 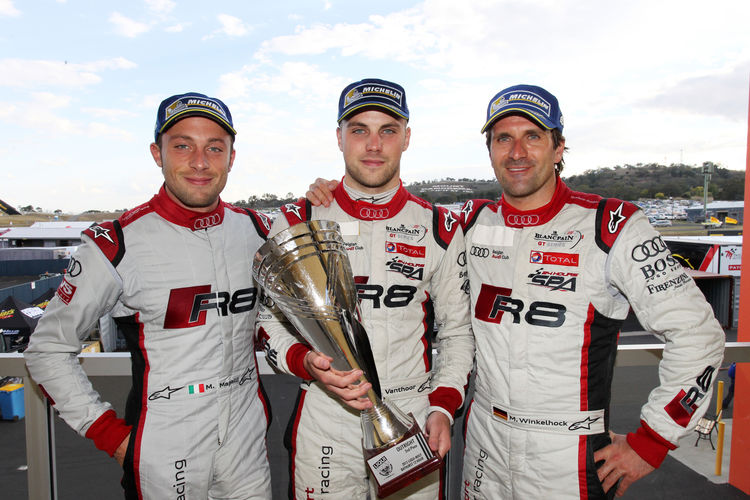 A year ago, the Audi driver missed victory in the Bathurst 12 Hour by just two seconds. This year, the German again ranks among the favorites.

A year ago, exactly 2.453 seconds separated you from victory in the Bathurst 12 Hour. How have you been preparing for Australia’s longest race this year?

In winter, I rigorously pulled off my fitness program. And in the new year, I already practiced my driving skills when I contested the Dubai 24 Hours. The circuit at Bathurst is one of my favorite tracks. It’s important to locally familiarize yourself again with current details during race track reconnaissance. I’m relaxed about traveling to Australia because we’re superbly prepared as a whole team.

You’re going to race with Phoenix Racing and your teammates Alex Davison from Australia and Laurens Vanthoor from Belgium. What chances are you expecting to have?

We’re determined to battle for victory and I believe we’ve got the chance to be in contention. Phoenix Racing won the race in 2012. Alex Davison knows the track and is going to give his all in his home round. With Laurens Vanthoor, I was on podium in Australia a year ago. The new generation of the Audi R8 LMS is optimally suited for this challenging track. But we’re going to meet with strong rivals as well. Last year, seven marques were in the top seven places. This year, there will be 24 GT3 race cars from seven manufacturers on the grid. That makes the race in the Southern Hemisphere similarly valuable as many major iconic races in the Northern Hemisphere.

What makes the race at Bathurst so unique?

The race is simply unmatched due to a large number of factors. The track configuration across Mount Panorama is breathtaking. The concrete walls directly lining the circuit don’t permit a single mistake, similar to a city street circuit between guard rails or walls. And there’s no other driver briefing in the world that warns you to beware of kangaroos. The weather in the Australian summer can be very hot, but we’ve seen wet races before as well. In 2010, we even had a storm that was so heavy that a tree fell and the race had to be interrupted. A total of 40 cars on a track length of just 6.213 kilometers require twelve hours of full concentration when overtaking or lapping other cars. I’m already looking forward to this challenge.