René Rast made a bit of motorsport history last year. The Audi campaigner instantly secured the title in his first full DTM season – a feat that had most recently been achieved 24 years ago by the Italian Nicola Larini.

Rast is only the seventh campaigner in the history of the popular touring car racing series to have won the prestigious title in his rookie season. Before the 2017 season, the native of Minden had only contested three DTM races. In July 2016 – literally overnight – he stood in for Adrien Tambay at Zandvoort with Audi Sport Team Rosberg. With no preparation whatsoever, Rast left such a good impression that in the 2016 finale at Hockenheim he was asked to stand in for Mattias Ekström. In sixth position, Rast scored his first points in his second DTM race, so recommending himself for a regular cockpit in the Audi DTM squad.

Twelve months later, Rast snatched the DTM title from Mattias Ekström on the finish straight. In doing so, he managed to convert a 21-point deficit to the Swede into a razor-thin three-point advantage on clinching sixth position on Saturday and second on Sunday. “René drove an incredible season last year,” says Head of Audi Motorsport Dieter Gass. “It was not without reason that we got him to join our DTM squad and expected good performances of him. Yet no-one – not even René himself – expected him to be in contention for the title in his first DTM year – and actually winning it in the end. His basic speed was one of the decisive factors. In 2017, he was the best qualifier.”

René Rast’s 2017 rookie season was impressive in every respect. As early as in the season opener at Hockenheim, he started from the front row for the first time. Two weeks later, it was followed by the first podium in his young DTM career at the Lausitzring and by his first victory at Budapest on the third race weekend. With that, Rast for the first time also took the lead of the standings which subsequently alternated several times between the German and Mattias Ekström. At Moscow and on the Red Bull Ring at Spielberg, Rast scored two further victories. In addition, his tally reflects three pole positions and four fastest race laps. “My aim was to become the best rookie,” says René Rast. “I wanted to learn how to score points regularly and always finish well. Who’d have thought before the season that I’d immediately be in contention for the title? That’s why in the finale I had nothing to lose. I tackled the weekend without pressure and was overjoyed about the positive outcome. My thanks go to Audi for giving me this fantastic car and the opportunity to still enter the DTM at the age of 30. I’m also thankful to Team Rosberg where I felt comfortable from day one and to my teammate, Jamie Green.”

René Rast’s unusual career within the Volkswagen Group led him from the Polo Cup all the way to Le Mans and now into the DTM. He won the Porsche Supercup held as part of the Formula 1 supporting program an amazing three times. Since 2011, he has been active under the banner of the four rings. At the wheel of the Audi R8 LMS GT3 sports car, he is regarded as a benchmark and guarantee for success. His victories in the 24-hour races at Daytona, Spa and on the Nürburgring underline this, as do a title win in the ADAC GT Masters – and now the DTM title. At the beginning of 2018, Rast contested his first “Race of Champions” event of the world’s best race drivers and together with Timo Bernhard won the Nations Cup for Germany – giving proof of being in a class of his own once again.

René Rast has opted not to use the DTM Champion’s number 1 on his car. He prefers to continue driving car number 33, the number that brought him luck in his debut season. “I think 33 looks cool and it’s easy for me to remember a double number.” Rast is a pragmatist through and through.

With his partner, Diana, and their son, Liam, who was born shortly before Christmas in 2016, the German lives in Bregenz on the Austrian side of Lake Constance. He has a simulator at home on which he regularly practices for the DTM. In addition, he sidelines as a development driver in the field of electric racing.

In “real life,” René Rast drives an Audi SQ7 TDI. “With a child we need a little more space, so the SQ7 is ideal,” says Rast. It did not take him long to get used to the role of a family man and father. “Having a child is mega. I hugely enjoy my time at home. It gives me strength for my next commitments on the race track.” 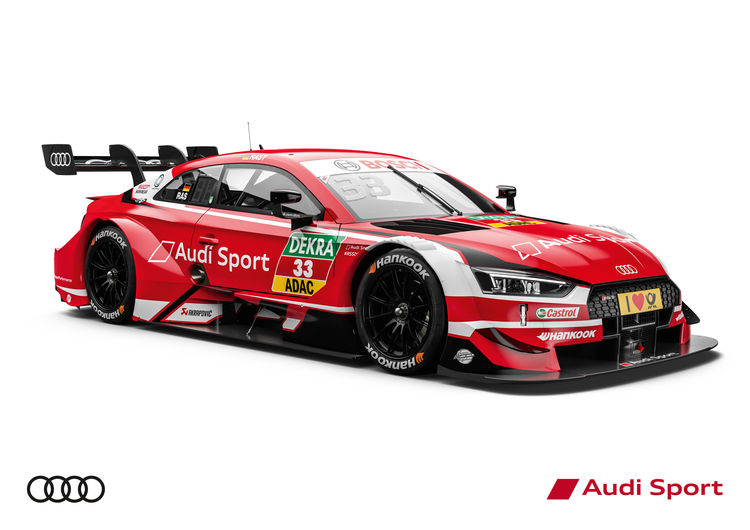