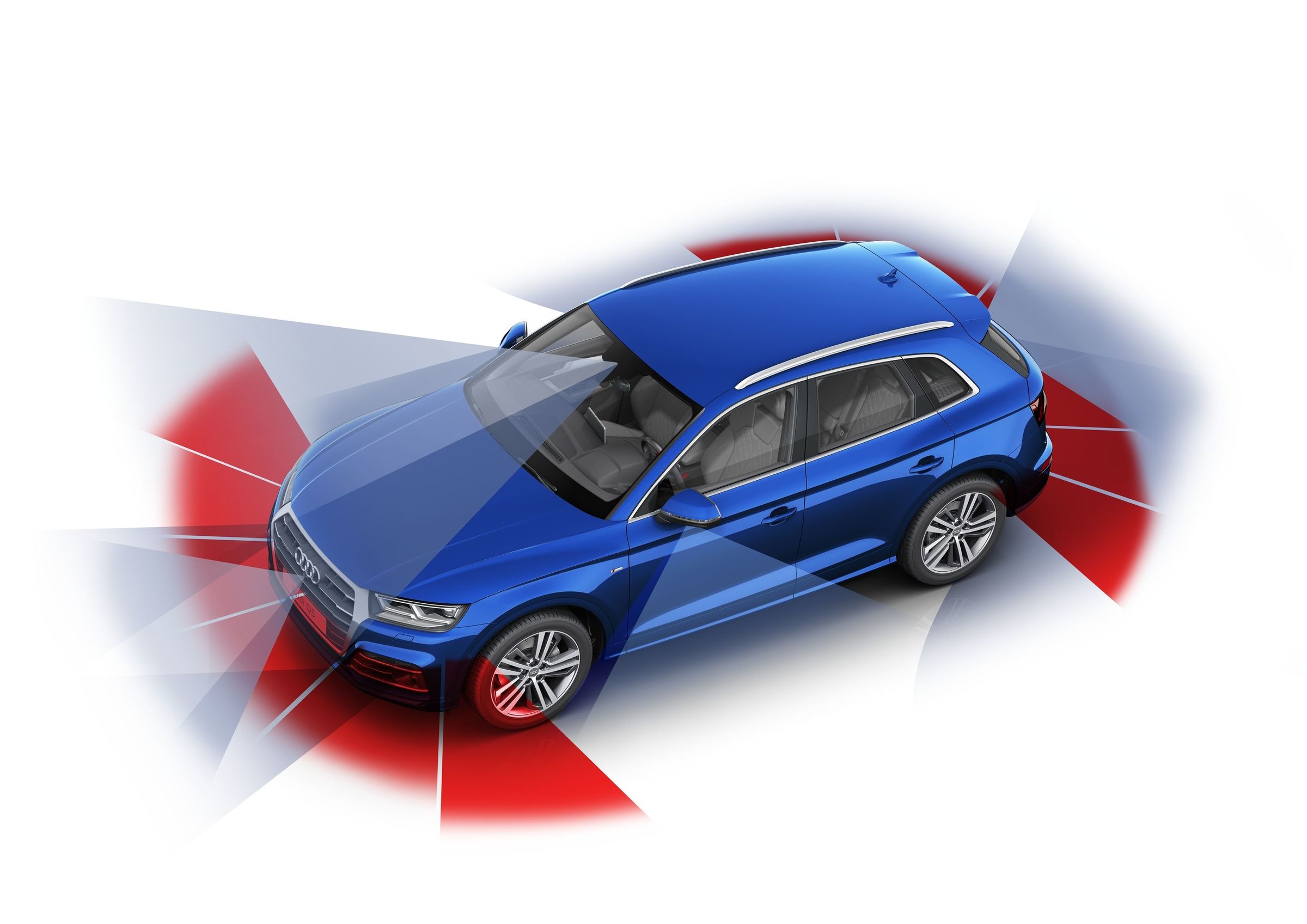 The new Audi Q5 raises the bar to a new level in its segment. This also applies to its broad selection of driver assistance systems. Compared to the previous model, they are either almost completely new or have been extensively further developed. Some systems are standard; the optional solutions are available either individually or as part of the Parking, City or Tour packages.

The standard safety system Audi pre sense city monitors the road in front of the new Audi Q5 for vehicles and pedestrians over a speed range up to 85 km/h (52.8 mph). For monitoring, it uses a camera in the windshield which can monitor events up to around 100 meters (328.1 ft) ahead. If it detects an impending collision, the driver receives a series of warnings, and if necessary the system initiates maximum braking.

Within the system’s limits, and at speeds up to 40 km/h (24.9 mph), Audi pre sense city can avoid an accident in many cases; at speeds up to 85 km/h (52.8 mph) it can reduce the speed at impact and thereby reduce accident severity significantly. If necessary, the system can also activate the protective measures of Audi pre sense basic, front and rear: The front seat belts are pretensioned electrically, and the windows and sunroof close. In case of a crash, the also standard brake assist supports the driver by making specific brake interventions during the accident – with the goal of preventing skidding movements that could lead to secondary collisions.

Attention assist is another standard feature in the new Audi Q5. It is part of the driver information system. It analyzes driving behavior and warns drivers if it finds any indications that they are starting to lose concentration. The adjustable speed limiter, also standard, limits the vehicle’s speed to the speed set by the driver. It is active from a speed of 30 km/h (18.6 mph).

Distance to the next car: adaptive cruise control

Adaptive cruise control (ACC) is the central component of the optional Tour assist package. The system keeps the new Audi Q5 at a specified distance to the vehicle ahead. The driver can control this distance over five stages. Using Audi drive select, the driver can also adjust the control dynamics.

ACC primarily uses the signals of the two front radar sensors and the camera. In interplay with the S tronic and tiptronic, it covers the entire speed range from 0 to 250 km/h (155.3 mph). With a manual transmission, it starts at 30 km/h (18.6 mph). Its Stop&Go function (only with automatic transmission) brakes the new Audi Q5 to a full stop, and – if the driver wishes – it has the car start off again automatically. When the system is deactivated, the distance indicator shows the distance to the car ahead and warns drivers when they are too close.

Over a speed range up to 65 km/h (40.4 mph), traffic jam assist can also assume certain steering tasks on roads that are in good condition, as long as the traffic is moving slowly. The system uses data from the radar and ultrasound sensors and the front camera, and it guides the car by gentle steering interventions to enable it to follow the line of vehicles ahead. It obtains its orientation from roadway markings and other vehicles on the road.

When traffic jam assist reaches its system limits – such as when the traffic jam clears up or there is a sharp curve ahead – the human driver has to take over driving tasks again. The driver is alerted in by staged alerts. If the driver ignores all of these, the system independently slows the new Audi Q5 to a safe stop. At speeds over 65 km/h (40.4 mph), the car automatically and seamlessly engages Audi active land assist.

The safety system Audi pre sense front extends the collision warning system and automatic braking function of Audi pre sense city for vehicles driving ahead to the entire driving speed range up to 250 km/h (155.3 mph). The system utilizes the two radar sensors and front camera and has the task of either avoiding front-end collisions or reducing their effects at higher speeds. In a dangerous situation, it prompts the driver to apply the brakes according to a complex warning concept – with visual and acoustic signals as well as a braking jolt.

If the driver does not react to the warning signals, the system first initiates autonomous partial braking while simultaneously closing the side windows and sunroof. The last step is maximum braking, assuming that the vehicle ahead is moving; at the same time the seat belts are tensioned. Audi pre sense front remains functional even when ACC is deactivated.

Another highlight in the Tour assist package is the predictive efficiency assistant (available in conjunction with a navigation system). When adaptive cruise control is activated, the system adapts the driving speed to the situation, the topography of the route, speed limits and road users driving ahead. On highways it can improve fuel economy by up to ten percent in this way.

Even if navigation is inactive, the predictive efficiency assistant uses the route data to alert the driver about situations in which it is advisable to slow down. The system detects curves, traffic circles and intersections, inclines and descents, town limits and speed limit signs before they become visible. A related message is displayed in the instrument cluster or the Audi virtual cockpit.

If the driver wishes, the system itself will control the freewheel function of the tiptronic within certain boundary conditions so that the new Audi Q5 will roll at idle speed towards the slow-driving zone. Once coasting ends, the SUV automatically accelerates back to the selected speed set by the driver, provided that ACC is enabled.

Safety and convenience: other systems in the Tour assist package

From a speed of 65 km/h (40.4 mph), Audi active lane assist helps the driver to stay in the driving lane. The most important signal source of the system, which is also available as a separate option, is a video camera that detects lane markings. The driver is assisted by gentle interventions in the electromechanical power steering. If the setting in the MMI system is for early control intervention, the system keeps the car in the middle of the lane. A steering wheel vibration can also be set, which warns the driver if the car is leaving the driving lane.

Collision avoidance assist is another system of the Tour assist package; it assists drivers when they need to drive the Audi Q5 around an obstacle to avoid a collision. From the video camera and radar sensor data, it instantaneously computes an optimal avoidance track, taking into account the distance, width and offset of the vehicle ahead.

In conjunction with Audi pre sense front, the system initiates a warning jolt in a dangerous situation. If the driver then steers, it assists with specific torque interventions in the power steering system.

Another innovation in the Audi Q5 is turn assist, which monitors oncoming traffic when turning left at driving speeds between two and ten km/h (1.2 – 6.2 mph). In a critical situation, it brakes the new SUV in a suitable driving lane to a standstill. The system is active in the background as soon as the driver activates the turn signal to turn across the carriageway.

The camera-based recognition of traffic signs (only with navigation system) rounds out the Tour assist package. It is able to detect several traffic signs simultaneously, including digital displays and supplemental signs, and it presents them to the driver as graphics in the head-up display and on the MMI monitor. In addition, it can warn the driver about driving on streets in the wrong direction.

The City assist package includes the lane-changing assistant Audi side assist, which is also available separately. At speeds from 15 km/h (9.3 mph), it uses the two rear radar sensors with a scanning range of some 70 meters (229.7 ft) to assist drivers when changing lanes. If a vehicle approaches rapidly or is located in the blind spot, a warning LED in the housing of the respective exterior mirror lights up. If the driver still operates the turn signal, the LED flashes brightly several times in succession.

While slowly backing up, cross traffic assist rear warns the driver of vehicles whose approach it deems critical, such as when pulling out of a perpendicular parking spot. The data from the rear radar sensor serve as the basis. The system is enabled when the parking system is activated. There are different levels of warning: visual, acoustic and finally a short jolt of the brakes.

Exit warning, which also utilizes the rear radar sensors, comes into play after the car has stopped. If other vehicles or bicycles are approaching from behind, it warns the driver and passengers not to open the doors by having a warning LED flash bright in all four door handles. The system remains in readiness for about three minutes after the ignition is switched off.

Other systems round out the City assist package. They are: acoustic and visual park assist plus, which activates independently whenever an obstacle is detected while maneuvering, and the reversing camera, which has a cleaning system. Both solutions are also available separately.

The Park assist package includes such features as park assist, which can also be ordered separately. At moderate driving speeds, the system is able to detect parallel and perpendicular parking spaces along the side of the road. As soon as the driver presses the park button, the new Audi Q5 steers into the space, assisted by twelve ultrasonic sensors, even if it involves multiple maneuvers. The driver only needs to set the right gear, accelerate and brake. The driver can also have park assist steer out of parallel parking spaces.

The surroundings cameras, the second part of the package, were designed for complex maneuvering situations. They display different views of the car’s immediate surroundings on the MMI monitor, including a virtual bird’s eye view and 180-degree images of the front and rear. Guide lines are shown on the display to simplify maneuvering in reverse.