Upcycling at Audi: a new lease on life for packaging

{{ activeItem() }}
Twitter
06/24/22
Pioneers for a future worth living. Watch the highlight film from the first two days of this year's @Greentech_fest… https://t.co/P8EBDXUu6F
06/24/22
Why downcycling when recycling is possible? This electric rickshaw with 2nd life Audi e-tron batteries showed at th… https://t.co/KMsZcECSbh
06/24/22
In the spotlight. At @greentech_fest Berlin, we are on a mission to celebrate change. Sharing our vision of an elec… https://t.co/xMghqBcxGz
06/24/22
Forbes World’s Most Influential CMOs. Hildegard Wortmann, #Audi Board Member for Sales and Marketing is on the list… https://t.co/Lu3LOYClyi
Audi on Twitter
YouTube
06/22/22 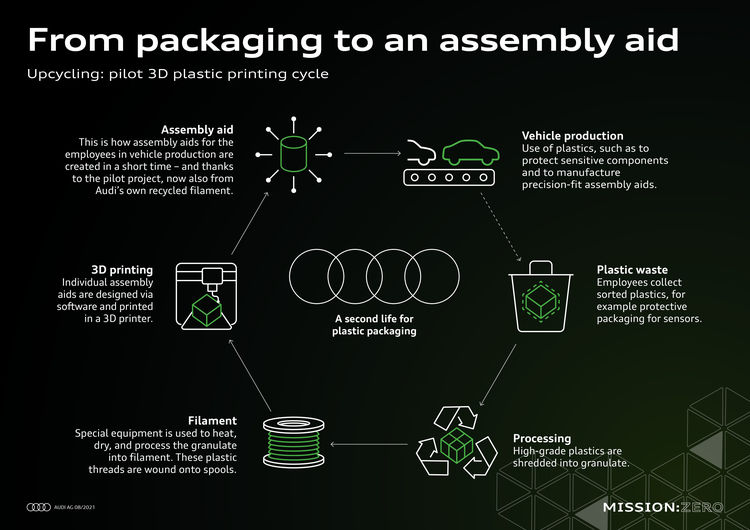 A new pilot project being implemented at Audi’s Neckarsulm site, among other initiatives, highlights just how important the sustainable use of resources is to the company. At this location, Audi produces 3D-printed assembly aids for vehicle production – and as of recently, from waste that is generated right there on site. These assembly aids are not only made of recycled material, they also promote ergonomic and safe work processes and are tailored precisely to the requirements of the employees. As such, the project is helping the company achieve the objectives of its cross-site environmental program “Mission:Zero.”

The idea for the 3D-printed assembly aids made from plastic waste is as simple as it is effective. “Our goal was to create a material cycle that would allow us to recycle some of the mixed plastics that accumulate during the production of, say, an Audi A7,” explains project manager Volker Eitrich. In this pilot project, packaging used to protect sensitive components – such as loudspeakers and sensors – is now being collected and sorted by type. Special equipment is then used to shred this plastic blister packaging into granulate and dry it. A filament maker then heats the granulate up to 450 °C and extrudes it in the form of plastic filament. And this is the raw material for the 3D printers that the team of experts can use to produce precision-fit assembly aids for vehicle production. In this project, the Audi team is working closely with the Dutch start-up 3devo, which also supplied the filament production technology.

Zero is the goal

As part of its cross-site environmental program Mission:Zero, the brand with the four rings is working to achieve net-zero1 carbon emissions at all of its sites by 2025. Alongside decarbonization, water use, and biodiversity, resource efficiency is one of the fields of activity. “At the Neckarsulm site, numerous measures and projects such as exclusively sourcing green power, a pilot system for a closed water cycle in the factory, and the aluminum closed loop in the press plant are already helping to protect the environment and conserve resources,” explains Achim Diehlmann, project manager of the Mission:Zero program and Head of Corporate Environmental Protection at the site. “The 3D filament printing pilot project is another example of how we are always developing new solutions to move closer, one step at a time, to our ultimate goal of achieving a completely sustainable automotive production process.”

A pilot project with potential

The Neckarsulm site has already been producing aids for vehicle production using 3D printing for five years. The objective is to be able to give employees on the production lines the exact assembly aid they need as quickly as possible, thereby supporting them in their day-to-day work. In the case of the Audi e-tron GT, 3D printing was already, and for the first time, an integral part of the process – even during pre-series production – so that all the tools for assembly and pre-assembly were available at the start of series production. More than 160 different printed aids are now in use at the location today. Tools produced via 3D printing include, for example, pushers, which are a kind of elongated finger that makes it easier for production workers to attach clips to the car body, or assembly aids that can be used, for example, to precisely attach the four rings to the rear of the vehicle.

“In this pilot project, we’re not only focusing on speed, ergonomics, and safety, but also solidly on sustainability,” explained Eitrich. “The first major milestone was technical proof that the process is viable in a general sense – in other words, that we can produce printable filament from existing plastics.” Working with a small team, Jérémy Lecoq, supervisor of the continuous improvement process (CIP) workshops at the site, is now testing the use of this filament for various aids and further optimizing the results. “The work aids made from recycled material are very well received by the employees on the line,” said Lecoq. “The fact that the idea we worked on for so long is feasible and is helping protect the environment is incredibly motivating,” added Eitrich. The team’s vision is now to scale the process. By increasing the size of the systems, the filament could, for example, be supplied to other areas in Neckarsulm or other locations in the future.

Other projects involving production and logistics at the Neckarsulm site help saving resources in a sensible way, for example at the supplier’s place of business, and therefore to systematically reduce waste. Logistics, for example, has already worked with suppliers to optimize several component packages. As a result, the companies succeeded in preventing the use of nearly 31 metric tons of nonrecyclable packaging in Neckarsulm alone. In addition, plastic film waste that accumulates at the factory has been used to produce trash bags since the beginning of the year, which are then used directly at the site. This allows the company to recycle around 15 tons of plastic waste each year.

New virtual planning methods in use at the company with the four rings are also helping to conserve resources. For example, Audi was able to virtually design part of the special containers used to transport sensitive components for the Audi e-tron GT for the first time. This VR application, which was piloted at the Neckarsulm site, is now in use throughout the group and helps to conserve resources previously used for container prototypes. In addition, the all-electric Gran Turismo is the first vehicle from the brand with the four rings to be manufactured entirely without prototypes. This was made possible by three-dimensional building scans and the use of virtual reality, among other things.

1 Audi regards net carbon neutrality as a state in which, following the exhaustion of other possible measures aimed at reducing the still remaining CO₂ emissions caused by the products or activities of Audi and/or currently unavoidable CO₂ emissions within the scope of the supply chain, manufacturing and recycling of Audi vehicles, at least quantitative compensation is provided through voluntary and globally conducted compensation projects. Throughout the utilization phase of a vehicle, meaning from when a vehicle is delivered to a customer, CO₂ emissions produced are not taken into account.