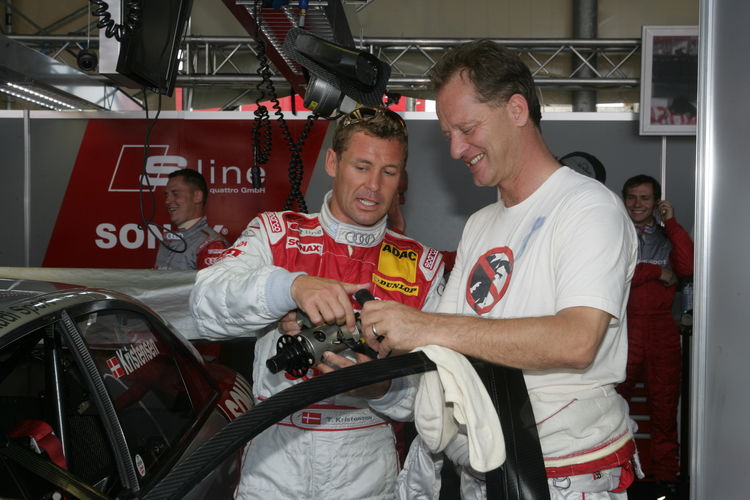 As in previous years, the Norisring attracted many prominent personalities. A popular meeting place for VIPs was the Audi Lounge behind the pit lane, where the Washington Trio and DJ Haty livened up the scene on Saturday night. In addition to Audi Chairman of the Board, Prof Dr Martin Winterkorn, the following celebrities – among others – were seen: actor Heiner Lauterbach, Albert von Thurn und Taxis, boxing promoter Wilfried Sauerland, boxers Markus Beyer and Sven Ottke, bi-athlete Martina Glagow and ski-jumper Dieter Thoma.

The three-year-old Abt-Audi TT-R experienced a special comeback at the Norisring. In the “Race of Legends”, in which six former Formula 1 and Motorcycle World Champions were fighting duels at the wheel of DTM cars, Frenchman Alain Prost clocked the best time. Prost also clinched overall victory in the race in which 500,000 euros of prize money were donated to various charity projects.

Former DTM driver Timo Scheider drove the Abt-Audi TT-R racing taxi at the Norisring and was enthralled afterwards: “The TT is definitely the best DTM car I’ve ever driven.”

Wolfgang Wolf, coach of the 1. FC Nürnberg federal league football club, interrupted the training camp to be Audi’s guest at the Norisring together with his family. Wolf experienced the 2.3-kilometre historic circuit in the hot seat alongside Audi works driver Christian Abt in the Audi A4 DTM racing taxi and expressed his thrill afterwards: “Where I would brake, he shifted into a higher gear. The physical demands made on the racing drivers are extreme and impressive.”

Four weeks ago he was dethroned as the “King of Le Mans” by Audi works driver Tom Kristensen. Now the Belgian Jacky Ickx visited the new Le Mans record winner at the DTM and had the Dane explain the Audi A4 DTM to him. Ickx, by the way, had two good reasons to visit the Norisring: his daughter Vanina contested the Porsche Carrera Cup.

Before the free practice session on Saturday, the two-time World Rally Champion Walter Röhrlpaid a visit to the reigning DTM Champion Mattias Ekström, who is an excellent rally driver himself and for whom Walter Röhrl has always been an example. “I have enormous respect for Mattias,” the former Audi works driver returned the compliment.

The DTM Champion’s family has grown. Mattias Ekström and his partner Tina Thörner now have a second dog with well-known genes: Lou has the same parents as Ekström’s Jack-Russell terrier, Moss, who is almost as famous in Sweden as his owner...

The former DTM driver Jason Watt, who has been paralysed from the waist down as a result of a motorcycle accident, contested the ADAC VW Polo Cup at the Norisring as a guest entrant and paid a visit to his compatriot Tom Kristensen.

Tom Kristensen competed together with Hans-Jürgen Abt’s wife Margit in the DTM beach volleyball tournament. The Danish-Bavarian duo was obviously talented and clinched the fourth place among the ten teams.

In the qualifying practice at the Norisring, the rear wheels of the 2004-spec A4 DTM cars entered by Audi Sport Team Joest were fitted with rim covers, which have a positive effect on aerodynamics, for the first time.