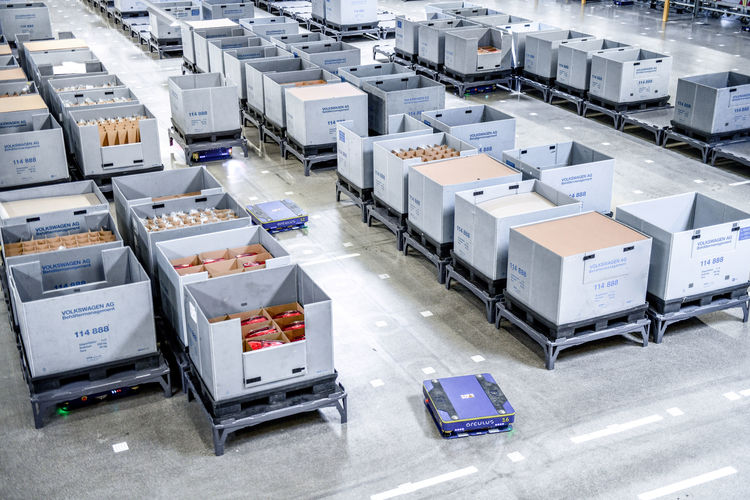 The Audi plants have been using automated guided vehicles (AGVs) for many years. These vehicles assist in supermarkets – logistics areas where employees pre-pick components in the correct sequence. The company is reversing the sequencing principle for the first time in Supermarket 2.0. Here goods come to the employee rather than the other way around. This is all made possible thanks to innovative control software developed by Audi experts together with Ingolstadt-based start-up arculus.

Employees used to cover large distances when picking under the person-to-goods principle. Supermarket 2.0 makes the goods-to-person principle possible on a large scale for the first time. The AGVs roll under the containers with the necessary components and transport them to a fixed pick station in the correct sequence. At each station, a logistics employee prepares the components required on the production line. The Audi Fleet Manager functions as the central control software. As the racks take up less space, Audi will reduce storage space by around
25 percent in the future.

“With Supermarket 2.0 and Audi Fleet Manager we are marking an important milestone on the way to smart logistics of the future,” says Peter Kössler, Board Member for Production and Logistics at AUDI AG. The wide variety of parts and need for correct sequencing makes automobile production challenging for the centralized control of automated guided vehicles. Developed in-house, Supermarket 2.0 is being used for volume production at Audi headquarters in Ingolstadt. The software currently controls eight automated guided vehicles simultaneously, with this figure rising to 32 by the end of the year.

In Foshan, China, Audi experts and employees from FAW-Volkswagen Automotive Company Ltd. have planned and set up a similar Supermarket 2.0 in parallel. The system went live in early 2020 in the FAW-VW plant which manufactures the Audi A3, Audi Q2L and Audi Q2L e-tron for the Chinese market as well as various other vehicles of the Volkswagen Group. The solution was based on an AGV system from a local manufacturer and was customized to the specific requirements of Supermarket 2.0 and automobile production. “Worldwide, the Audi experts benefit hugely from the experience their colleagues in Ingolstadt acquired with their pioneering work,” says Dieter Braun, Head of Supply Chain AUDI AG.

In 2015, Audi became the world’s first automobile manufacturer to test the goods-to-person principle on a small scale. AGVs helped employees pick the driver’s manuals in the “supermarket of the future.” The guided vehicles currently used in the Ingolstadt Supermarket 2.0 can transport material weighing up to a ton and move at a speed of 1.5 m/second to guarantee employee safety at all times. Audi is also pioneering innovation in the Volkswagen Group with its custom-developed Supermarket 2.0 solution. The Group also plans to use the solution at other Audi locations and with other Group brands.

Audi Fleet Manager will offer another benefit in the future. Each AGV manufacturer uses its own control software, meaning different vehicles could not communicate with each other in the past. Vehicles needed separate drive routes to prevent collisions. However, vehicles from different manufacturers have their own particular strengths and so often complement each other well. As a result, Audi was looking for a solution where these vehicles could operate simultaneously in the same area. Supermarket 2.0 will provide a use case to do just that in the future. Audi experts will test and implement the solution developed with the German Association of the Automotive Industry (VDA) and also look at upstream and downstream processes.