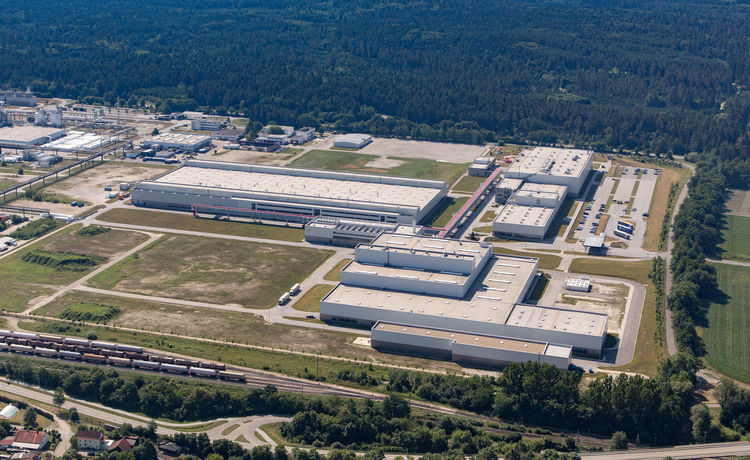 The Münchsmünster production site close to Ingolstadt has been an important part of the main AUDI AG site since fall 2013: This facility, extending over an area of 54 hectares, makes form-hardened sheet steel elements and diecast aluminum components for lightweight construction using innovative production methods – combining low weight with strength and maximum precision. Key components for models of the Audi, VW, Bentley and Lamborghini brands have been manufactured here for the past five years. The new Audi e-tron equally incorporates chassis modules from Münchsmünster.

The Münchsmünster facility now has a workforce of over 900 and operates three shifts. Production has been gradually ramped up over the past few years. With the site operating very economically, the target has been achieved. 2018 again saw output of some 25 million vehicle components. The competence center comprises various areas: the structural components shop, the chassis modules shop and the press shop.

The giant aluminum diecasting systems in the cutting-edge structural components shop are in operation round the clock. All components are significantly lighter than conventional welded parts made from sheet steel – saving 30 percent weight. More than 600,000 components were made here in 2018, including strut mounts for the A4/A5 family and structural components e.g. for the new models Audi Q8 and Lamborghini Urus.

Production volume in the chassis modules shop climbed to around nine million parts in 2018. On two lines, Audi manufactures wheel hubs made from forged steel for Audi models with a longitudinal engine, and also for VW Group models and for Lamborghini. Gray cast iron brake disks are produced on new machining lines for automobiles based on the modular longitudinal platform (MLB). There are four additional lines for cast aluminum wheel carriers and forged aluminum swivel bearings for various Audi and VW models. Münchsmünster is also where brake disks, swivel bearings, wheel carriers and wheel hubs for the new Audi e-tron are made.

In the press shop, Audi workers operate ultramodern presses for hot and cold forming. The blanks required for both press lines are prepared on site in a strip-cutting plant. Advanced laser systems in the laser park process the hot-formed components, which are used mainly for strength and crash-relevant parts such as the B-post or tunnel reinforcement for the models of the A4/A5 family.

Sustainability is a topic that Audi actively addresses in Münchsmünster as much as anywhere else: Thanks to efficient practices and processes the site reduced natural gas consumption by six percent between 2017 and 2018, and power consumption by seven percent – despite running at full capacity.

Since the opening of the site, natural gas consumption alone has been cut by 2,750 metric tons of CO2. Right from its opening, power has been procured from CO2-neutral sources. In addition, a new recycling center covering 1,000 square meters (10,763.9 sq ft) is currently under construction at the site. This is where all waste, whether plastic, paper or wood shavings, will be collected and sorted.

Although the Münchsmünster site is an industrial complex, it is home to a wide range of biodiversity areas. So far, 111 plant species have become established on the rough grassland, whereas conventional industrial grassed areas are home to only ten species. The plants that can be found here in Münchsmünster include campanula, Carthusian pinks and dark mullein. The cultivation concept for the green spaces is steadily being optimized to ensure they continue to improve. In addition, diverse food sources and nesting places have attracted 84 species of wild bee. Native shrubs, fruit trees, wild flowers and plants such as lavender, globe thistles, sage and stonecrop can be found all over the site. The lawns are mown in rotation once or twice a year to ensure insects find sufficient food throughout the entire season. The grass cuttings are left to dry on the lawns until they have shed their seeds.