Efficient and clean: exhaust aftertreatment for gasoline and diesel engines 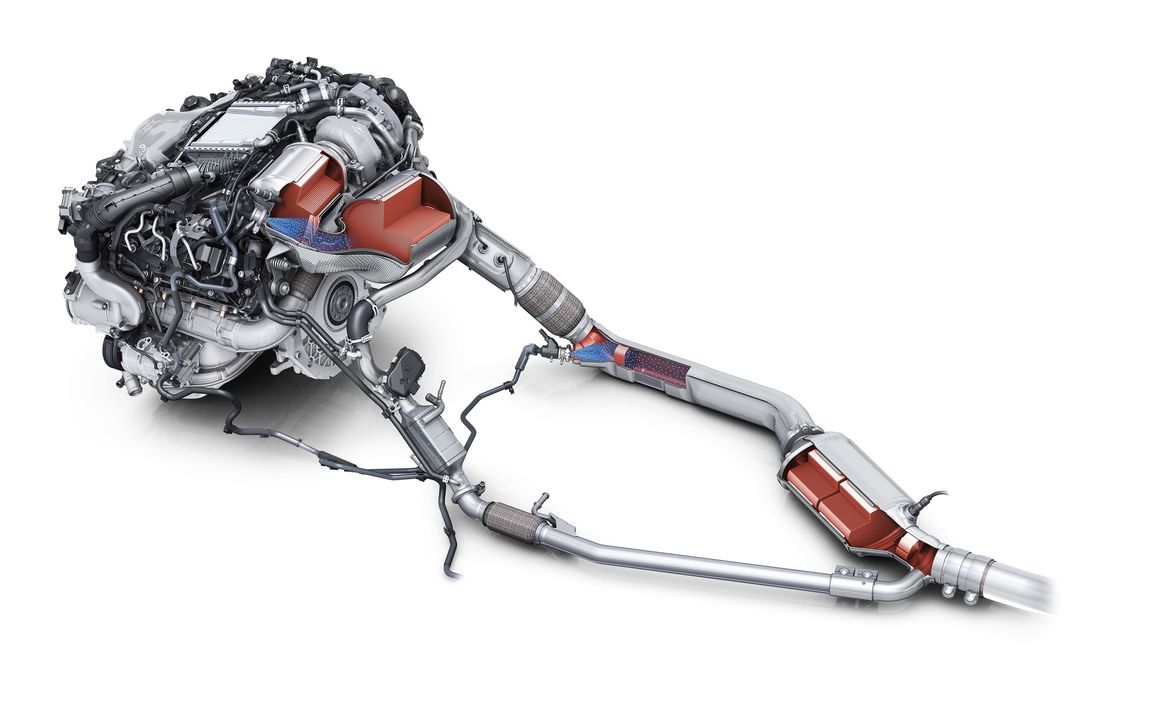 What are the current challenges of exhaust gas purification?

The required levels illustrated by the example of nitrogen oxide emissions for diesel engines show how much stricter emissions legislation has become. While the Euro 3 limit from 2000 onwards was still set at 500 mg/km, only 80 mg/km have been permissible for new type approvals according to Euro 6d since 2020. Within the space of two decades, the limit has dropped to less than one sixth. The move from Euro 5 to Euro 6 alone resulted in 56 percent of the total reduction. On January 1, 2020, the Euro 6d standard superseded the previously valid Euro 6d TEMP limits for newly homologated models. Starting on January 1, 2021, all new vehicles seeking first-time approvals will have to comply with the new standards, including the strict requirements of the RDE (Real Driving Emissions) test method that targets emissions in real-world day-to-day driving. Nitrogen oxides – also referred to by their chemical abbreviation NOx – are formed when nitrogen from the air reacts with oxygen during the combustion process. The proportion of nitrogen oxide is particularly high with diesel engines because these units are designed to operate with a surplus of air.

How has Audi composed its exhaust aftertreatment system for the V6 TDI?

Audi is responsible for the basic development of the V6 TDI engines of the new Evo 3 generation within the Volkswagen Group. As the requirements imposed by stricter emission standards keep increasing, the engineers have to improve the efficiency of exhaust gas purification. In the case of exhaust aftertreatment, this requires larger design volumes of the catalytic converters, among other things. With the current new development for the V6 TDI, Audi has achieved a compact combination of all technologies. The flow of the two exhaust gas tracts on the outside of the two cylinder-bank sides converges behind the engine in front of the firewall, where the exhaust gas turbocharger is located. Directly downstream in the exhaust system is an oxidation catalyst, referred to as NSC. The name stands for NOx Storage Catalyst. It is directly followed by an SCR-coated diesel particulate filter (SDPF). The abbreviation SCR stands for Selective Catalytic Reduction. The second SCR catalyst is located further downstream in the exhaust system below the vehicle’s underfloor.

How does multi-stage exhaust gas purification work on TDI engines?

The oxidation catalyst (NSC) close to the engine can temporarily store nitrogen oxides up until the regeneration stage. This catalyst is effective even at low engine operating temperatures, for instance following a cold start. Regeneration occurs by means of a short-term mixture enrichment triggered by the engine control unit. Thus, besides storing and subsequently neutralizing the nitrogen oxides, the catalyst oxidizes unburned hydrocarbons and carbon monoxide into carbon dioxide and water vapor, using the oxygen molecules of the temporarily stored NOx.

Another stage to reduce nitrogen oxides is triggered by the injection of the AdBlue additive. Because this aqueous urea solution is injected into the exhaust system at two points where temperatures differ, using one dosing module at each point, the total system is referred to as twin dosing. Subsequently, the chemical process of urea thermolysis occurs in the exhaust system, which converts the AdBlue additive into ammonia. The ammonia reacts with the SCR-coated diesel particulate filter (SDPF) close to the engine, and on the second SCR catalyst, located further downstream in the exhaust system, with nitrogen oxides that have not been converted yet. This results in the formation of water and elemental nitrogen, which accounts for about four fifths of our Earth’s atmosphere.

What are the benefits of a twin dosing system?

Twin dosing of the aqueous AdBlue urea solution is particularly effective. It takes advantage of the different conditions in various areas of the exhaust system to enhance the effectiveness of the total system, adjusted to diverse operating conditions. In this way, Audi manages to convert more than 90 percent of the nitrogen oxides across a wide temperature and operating range. Thus, twin dosing decisively contributes to meeting NOx emission limits. If the vehicle is driven in high-load conditions for a longer period of time, such as on expressways or while towing a trailer, exhaust gas temperatures in the SDPF close to the engine significantly increase, resulting in a decline of nitrogen oxide conversion rates. This provides the stage for the second injection of AdBlue upstream of the second active SCR catalyst, which is located significantly further downstream in the vehicle’s underfloor on a lower temperature level. This enables the total system to achieve high conversion rates across a wide range.

When will this V6 TDI engine be launched and in which model ranges will it be used?

Twin dosing technology in the V6 TDI will be used from the Evo 3 generation onwards. It is available in diesel engines with three liters of displacement in three different performance classes and will be installed for the new year in all models featuring this engine.

Just like with the TDI, the purification of exhaust gases starts with a variety of internal engine technologies for the TFSI units, in other words the turbocharged direct-injection gasoline engines. Audi uses the B cycle, also known as the Miller combustion process, in various engines. It yields major fuel economy benefits especially during an easy-going driving style. Under low load and low engine speed, the two-stage Audi valvelift system (AVS) closes the intake valves earlier. This results in a shortened compression stage which, combined with lower throttle losses and the long expansion phase, specifically in the predominantly occurring part-load operating range, yields emission and fuel economy benefits. The cylinder on demand system is another in-engine method for reducing consumption. It deactivates individual cylinders in operating conditions with low load demands. An alternative method is indirect injection. It complements FSI gasoline direct injection, reduces consumption and increases engine power output. The utilization of a gasoline particulate filter (GPF) in the exhaust system is common to all systems.

Why do SI engines require a gasoline particulate filter?

Most of Audi’s gasoline-powered models use efficient TFSI technology, in other words gasoline direct injection engines. Turbocharging is additionally utilized in the majority of models. The objective is to effectively purify exhaust gas even in unfavorable operating ranges. The GPF reduces carbon particulate emissions caused especially when cold-starting gasoline engines by as much as 90 percent. Since 2018, all of Audi’s model ranges approved according to the Euro 6d TEMP emissions standard have been equipped with gasoline particulate filters, with two exceptions: the two-liter TFSI engine of the EA888 model range for natural gas engines such as the one used in the Audi A4 Avant g-tron and Audi A5 Sportback g-tron and the 1.5 TFSI unit in the Audi A3 Sportback 30 g-tron. These engines do not require such a filter because methane, which is also referred to as CNG (Compressed Natural Gas), burns without particulate emissions.

How does a gasoline particulate filter work?

The exhaust gas has to flow through a fine-pored cordierite ceramic body behind the catalytic converter. The operating principle of this gasoline particulate filter is similar to the exhaust gas purification technology of a diesel engine: The exhaust gas flows through porous ceramic cell walls, which form small, closed channels toward the intake and exhaust side, respectively. The particulate matter sticks to the rough ceramic surface. Depending on the individual driving style, the regeneration of the filter takes place in a process that is simpler than that of a diesel engine because a gasoline unit does not generate particulate matter in every operating condition. Likewise, due to its design principle, exhaust gas temperatures of spark ignition engines are higher than those of compression ignition engines. Due to controllable oxygen supply via theengine control unit and a subsequent additional short-term temperature increase in the exhaust system, the amount of the charge, which is clearly less than that of a diesel unit, easily lends itself to post-oxidation and neutralization.

What distinguishes Audi’s system compared to the competition?

Audi uses especially voluminous gasoline particulate filters. In the case of the EA888 two-liter four-cylinder engine, it has a volume of 3.2 liters. Its design featuring back pressure optimization enables favorable power and torque curves. GPF operation is sensor-monitored on all models across the board. Thanks to this monitoring process, the frequency and duration of regeneration are oriented to the condition of the filter, which results from the actual individual everyday driving profiles of any customer. This reduces emissions and the environmental burden, and increases the service life of the filter.