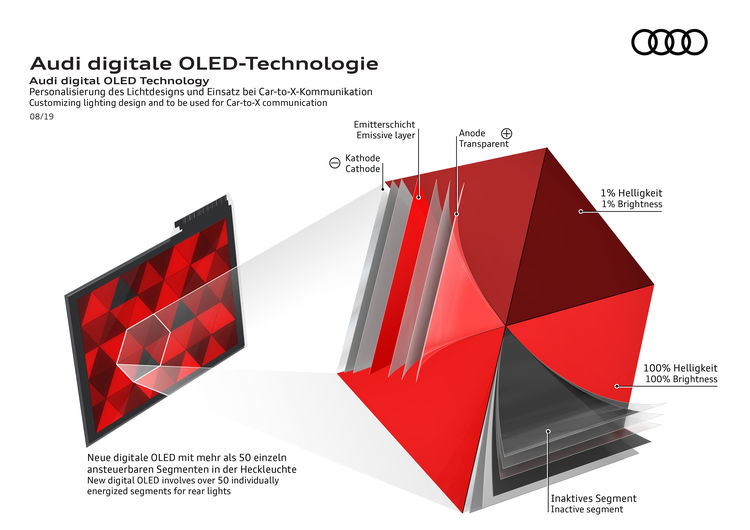 At the thirteenth International Symposium on Automotive Lighting (ISAL 2019), Audi presenters will offer insights into the next generation of OLED lighting technology. The new digital OLED technology enables customizable lighting designs and permits communication using the exterior lighting. The congress begins on September 23, 2019 in Darmstadt. Audi guest speakers will be presenting digital OLED technology as well as the latest trends and developments in lighting at what is the biggest and most important conference for automotive lighting technology.

Audi’s OLED (organic light emitting diode) technology first went into series production in 2016 in the rear lights of the Audi TT RS. Unlike point light sources – such as LEDs which are made of semiconductor crystals – OLEDs are flat light sources. Their light attains a new level of homogeneity, and dimming is continuously variable. The lights do not cast any shadows, nor do they require any reflectors, light guides or similar optical components – and this makes the OLED units very efficient and lightweight. Another advantage of OLEDs is the scope for dividing them into small segments that can be energized to different levels of brightness. OLED lights can also produce animation effects in Audi models, such as coming home and leaving home scenarios.

The next development stage – digital OLED technology – will be unveiled to the public at the ISAL. While previous Audi models have featured up to four freely designed complex light segments to realize a specific design, the new technology of digital OLED makes customizable lighting design possible for the rear lights.

This involves dividing the OLED light sources into a much greater number of individually energized segments. The resulting over 50 segments can be activated as needed and their brightness continuously adjusted. Audi designers and developers can thus produce a wide variety of lighting designs with the same hardware. The benefits of OLED include perfect contrast, high homogeneity and minimal spacing between segments. It maintains high system efficiency as a flat light inside a lighting element with a thickness of just one millimeter (0.04 in). Digital OLED is therefore the perfect technology for executing a highly precise and versatile form of customizable lighting design.

As well as the wide range of lighting designs possible, digital OLED can serve as a display element in the rear lights for car-to-x communication. Predefined symbols, for example, can be displayed to alert other road users promptly to local hazards such as black ice or the approaching end of a tailback.

Audi will be giving next-generation digital OLED technology its first showing in a demonstrator at the ISAL from September 23.