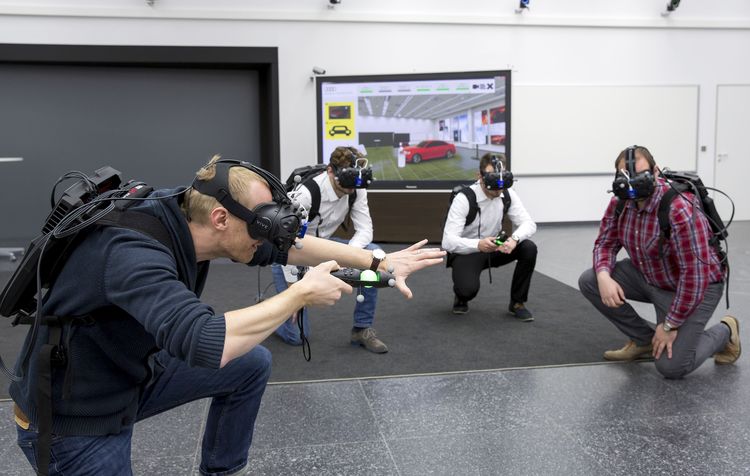 Audi is now testing a so-called virtual-reality holodeck for assessing the design of new car models. This technology creates a walkable, virtual environment with a three-dimensional image of a car. That allows development engineers and production experts to gain a realist overall impression of a new model and its proportions at an early stage. In this way, Audi can reduce the number of complex physical test models, thus saving development time and costs.

Audi will increasingly apply virtual-reality (VR) technologies in the future. Since 2003, it has been using virtually created 3D models as a firm element of its development process. The company is now also testing a so-called virtual reality holodeck so that the design of new automobile models can be virtually assessed at an early stage. The term “holodeck” comes from the science-fiction series Star Trek and refers to a special room that simulates virtual worlds. That vision becomes reality in the virtual reality holodeck at Audi. In a room approximately 15 meters by 15 meters square, car prototypes can be displayed realistically and with the correct proportions. For this purpose, the experts from Audi’s planning have exactly recreated the room in which the design assessment takes place in the virtual world. They place the virtual car models there with the help of up-to-date construction data. Those virtual models can then be intuitively experienced from inside as well as outside. Unlike previous VR environments, up to six people can now walk around the car at the same time.

Audi is testing the holodeck on the interface between development and production. Experts from both departments together assess the overall visual impression and the surface of the new cars, and adjust the positions of individual lines and gaps. This assessment is the final stage before the tools required for the car go into production. Until now, photo-realistic 2D computer graphics have been used as well as hand-made physical models, which are very expensive and can take up to six weeks to produce.

“With the VR holodeck, we obtain a realistic impression of the proportions of our future models. This enables us to make important decisions faster,” explained Martin Rademacher, who is in charge of the VR holodeck project at Audi. In order to analyze individual aspects in detail, two-dimensional representations are still used: “They currently offer even better resolution and better quality than the walkable VR installation,” says Rademacher.

In order to work in the holodeck, each user wears VR glasses and uses two hand controllers for interaction. Each user also carries a backpack containing a powerful PC that weighs just three kilograms and which calculates the scene displayed. These mobile PCs are connected via Wi-Fi with a central workstation, which controls the data exchange. The three-dimensional model can be presented in various settings. In a further stage of development, the holodeck will enable staff members at other Audi locations to participate, which will considerably ease the organization of work. After the start of production, the system will be used to maintain high quality standards in production.

Audi developed the overall concept together with the Stuttgart media agency Lightshape. Before the end of this year, the carmaker plans to introduce the virtual reality holodeck in its working processes. Another objective of the current test phase is to probe the possibility of applications in other parts of the company: The production planners at Audi have already created virtual presentations of complete assembly stages in the system to visualize future processes. The department is also consulting with other brands of the Volkswagen Group.

Additional areas in which virtual-reality technologies are already applied at Audi include virtual training for employees in packing logistics and the Audi VR experience for customer advice. The latter allows potential customers to virtually configure their desired car and to experience all optional equipment in a realistic way.