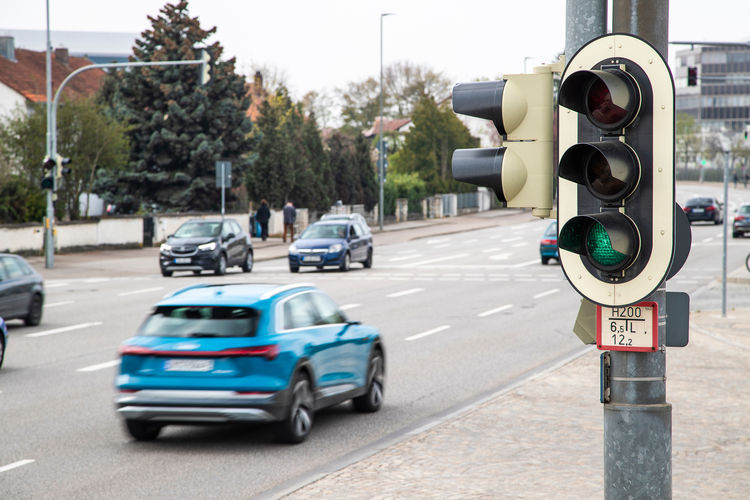 Audi is introducing the vehicle-to-infrastructure (V2I) service “Traffic Light Information” to Europe. From July Audi will network new models with the traffic lights in Ingolstadt/Germany; further European cities will follow from 2020 onwards. Then cars will be more likely to catch a “green wave” in the city: Audi drivers will see in the cockpit what speed is required to reach the next traffic light on green. If that is not possible within the permitted speed limit, there will be a countdown to the next green phase. Driving in cities will thus become more relaxed and efficient. In the USA, Audi customers have already been using this service since late 2016. Audi is the first manufacturer worldwide to network its series-production models with traffic lights in cities.

“Stop-and-go traffic in cities is annoying. By contrast, we are pleased when we have a “green wave” – but we catch them far too seldom, unfortunately. With the Traffic Light Information function, drivers are more in control. They drive more efficiently and are more relaxed because they know 250 meters ahead of a traffic light whether they will catch it on green,” says Andre Hainzlmaier, head of Development of Apps, Connected Services and Smart City at Audi. “In the future, anonymized data from our cars can help to switch traffic lights in cities to better phases and to optimize the traffic flow.”

In the USA, Audi customers have been using the “Time-to-Green” function for two years: if the driver will reach the lights on red, a countdown in the Audi virtual cockpit or head-up display counts the seconds to the next green phase. This service is now available at more than 5,000 intersections in the USA, for example in cities including Denver, Houston, Las Vegas, Los Angeles, Portland and Washington D.C. In the US capital alone, about 1,000 intersections are linked to the Traffic Light Information function.

Since February Audi has offered a further function in North America. The purpose of this is especially to enable driving on the “green wave”. “Green Light Optimized Speed Advisory” (GLOSA) shows to the driver in the ideal speed for reaching the next traffic light on green.

Both Time-to-Green and GLOSA will be activated for the start of operation in Ingolstadt in selected Audi models. These include all Audi e-tron models and the A4, A6, A7, A8, Q3, Q7 and Q8 to be produced from mid-July (“model year 2020”). The prerequisite is the “Audi connect Navigation & Infotainment” package and the optional “camera-based traffic sign recognition”.

Why is this function becoming available in Europe two years later than in the USA?
“The challenges for the serial introduction of the service are much greater here than, for example, in the USA, where urban traffic light systems were planned over a large area and uniformly. In Europe, by contrast, the traffic infrastructure has developed more locally and decentrally – with a great variety of traffic technology,” explains Hainzlmaier. “How quickly other cities are connected to this technology depends above all on whether data standards and interfaces get established and cities digitalize their traffic lights.”

On this project, Audi is working with Traffic Technology Services (TTS). TTS prepares the raw data from city traffic management centers and transmits them to the Audi servers. From here, the information reaches the car via a fast Internet connection.

Audi is working to offer Traffic Light Information in further cities in Germany, Europe, Canada and the USA in the coming years. In the large east Chinese city of Wuxi, Audi and partners are testing networks between cars and traffic light systems in the context of a development project.

In future, Audi customers may be able to benefit from additional functions, for example when “green waves” are incorporated into the ideal route planning. It is also conceivable that Audi e-tron models, when cruising up to a red traffic light, will make increased used of braking energy in order to charge their batteries. Coupled with predictive adaptive cruise control (pACC), the cars could even brake automatically at red lights.

In the long term, urban traffic will benefit. When cars send anonymized data to the city, for example, traffic signals could operate more flexibly. Every driver knows the following situation: in the evening you wait at a red light – while no other car is to be seen far and wide. Networked traffic lights would then react according to demand. Drivers of other automotive brands will also profit from the development work that Audi is carrying out with Traffic Light Information – good news for cities, which are dependent on the anonymized data of large fleets to achieve the most efficient traffic management.

In future, V2I technologies like Traffic Light Information will facilitate automated driving. “A city is one of the most complex environments for an autonomous car. Nevertheless, the vehicle has to be able to handle the situation, even in rain and snow. Data exchange with the traffic infrastructure can be highly relevant here,” says Hainzlmaier.