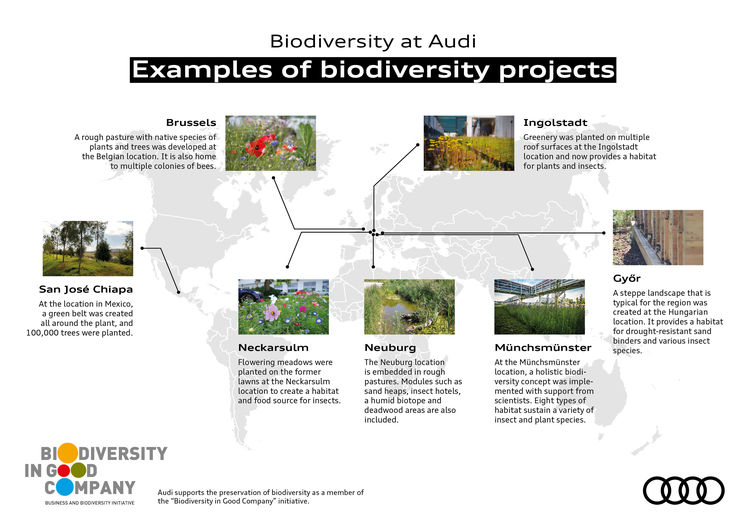 Biodiversity at Audi: At all Audi sites projects to protect biodiversity are also being implemented and expanded. The company joined the Biodiversity in Good Company initiative already in 2015.
Download PDF (266 KB)
Facebook
Twitter
LinkedIn
WhatsApp

Along with climate change, the loss of biodiversity is one of the greatest challenges of our time. The United Nations has therefore declared the current decade to be the UN Decade of Biodiversity. Audi is also committed to protecting biodiversity and has transformed 17 hectares of land on the Audi production site in Münchsmünster into a near-natural habitat for animals and plants. So far, 112 plant species have developed there and around 90 species of wild bees have settled there.

“Habitats for plants and insects are becoming increasingly scarce in the world around us. We clearly see the preservation of the natural basis of human, animal and plant life as part of our corporate responsibility,” says Rüdiger Recknagel, Head of Environmental Protection at AUDI AG. The company joined the Biodiversity in Good Company initiative already in 2015 and has committed itself to analyzing the impact of its business activities on biological diversity and to including its protection in its environmental management system.

The company has already developed a comprehensive concept for the Audi production facility in Münchsmünster near Ingolstadt to create habitats for numerous animal and plant species. Audi has designed 17 hectares of the 31-hectare plant site to be as natural as possible. In Münchsmünster, 112 species of meadow plants are currently growing. By way of comparison, only about ten different species thrive on conventional industrial meadows. The biotope-like Audi site includes rough meadows and areas for perennial plants and trees. Audi has also integrated a meadow garden, deadwood areas and a stream with a rich structure into the concept. The design of the site is continually being optimized and is supported by biologists.

“We have planted native shrubs and trees on large parts of our open spaces and have laid out extensive meadows to provide animals with diverse food sources, nesting opportunities and near-natural habitats. The first successes are already visible,” says Thomas Sukowski, Head of Audi Production at Münchsmünster. “Our employees also benefit because they can now spend their breaks in natural green areas.” The Audi employees working at the site accompanied the implementation of the project right from the start. During planting campaigns, they were able to plant fruit trees typical of the region, take over a tree sponsorship or install nests for insects.

Projects to protect biodiversity are also being implemented and expanded at the other Audi locations. For example, on the IN Campus, the future Audi technology park in the north-east of Ingolstadt, 15 hectares of a former refinery site will be renatured and designed according to biodiversity criteria. The Audi Neuburg site has also implemented appropriate ecological measures on its site, including the integration into the site of sand hills, insect hotels and deadwood areas. At Audi’s Neckarsulm site, seed mixtures with more than 35 species of flowers have been planted on several former lawns to create habitats and food sources for insects. Back in 2009, Audi established the Audi Environmental Foundation, which is involved in numerous projects to protect the natural basis of life for humans, animals and plants.