Mike Rockenfeller (Schaeffler Audi RS 5 DTM #99): Back at the top

Following two difficult years, Mike Rockenfeller is enjoying the DTM again. Together with Audi Sport Team Phoenix he climbed out of the valley and drove back to the top. Now, in the 2018 season, the Audi campaigner is aiming to pick up where he left off last year.

In 2013, Mike Rockenfeller won the DTM drivers’ title and in 2014, in third position overall, he was the best Audi campaigner. After that, things went downhill. The tire generation used back then was not a good fit for his tire-saving driving style and things at Audi Sport Team Phoenix were not running smoothly anymore in every respect either. That is why the German at the end of 2016 was faced with the key question of either doing something different after ten years in the DTM or starting over.

“Rocky” opted for a relaunch in the DTM – together with Ernst Moser’s team in which he had his most successful DTM years. “I was optimistic that we’d be able to make it back to the top,” he says. “Both, the team and I, had to dig ourselves out of that hole. We had to change a few things in order to make a different appearance again. All in all, after two difficult years, it was a good season for me because I was in contention again for victories and the title.”

Rockenfeller did a good job of handling the softer, unheated Hankook tires straight from the start. The cooperation with his new race engineer, Laurent Fedacou, worked well and the other changes made to the DTM helped him too. “There was a fresh breeze in the DTM. That was good for the team and also for me.”

His season, though, was overshadowed by an accident on the Norisring that was not his fault and in which he broke his left foot. “Rocky” gritted his teeth and was back at the wheel of his Audi RS 5 DTM right in the next race at Moscow. That he mounted the podium on crutches was remarkable: unusual for a race driver, he had to use his right foot to accelerate and brake.

In spite of his accident, he had chances of winning his second DTM title up until the last race at Hockenheim. In the end, he placed fourth. The positive overall impression, though, has remained.

Rockenfeller has been competing in the internationally popular touring car racing series with Audi since 2007. The first years at the wheel of a previous-generation car were tough. “Rocky” drew his motivation primarily from the sports car races he contested in parallel to the DTM. In 2010, in the Audi R15 TDI, he clinched overall victory in the 24 Hours of Le Mans and a year later, he had the most serious accident in his career to date in the iconic French endurance race – just at the moment when he had gained a foothold in the DTM and won his first DTM race. Forced to skip two races following his accident at Le Mans, he had to bury his hopes for the title.

In 2012, he switched to Audi Sport Team Phoenix. In his first year with the Eifel-based squad, he was the best Audi driver and in 2013, he clinched the championship title in the Schaeffler Audi RS 5 DTM. “That was a very emotional experience, not least because I’d been working for this moment for such a long time,” “Rocky” recalls.

In parallel to the DTM, Mike Rockenfeller occasionally contests sports car races, at the moment, primarily for Corvette Racing in the United States. This year, he is scheduled to return to the 24-hour race at Le Mans with the U.S. team – the French endurance classic has and continues to be Mike Rockenfeller’s great passion.

His parents, his wife, Susanne, and their two sons, Phil and Paul, give “Rocky” strength. On the Swiss side of Lake Constance, the Rockenfellers built a house in 2013, his championship-winning year, which includes a private gym where “Rocky” stays fit. An activity he likes even better is riding his road bike which he frequently does together with former cycling pro Andreas Klöden.

Privately, Rockenfeller is now driving an Audi SQ7 TDI. “I used to have an RS 6, but the SQ7 is simply perfect for family and sports,” he says.

Aside from his family and motorsport, Mike Rockenfeller has a soft spot for old cars – not an unusual interest for someone who was trained as a master automotive mechanic. 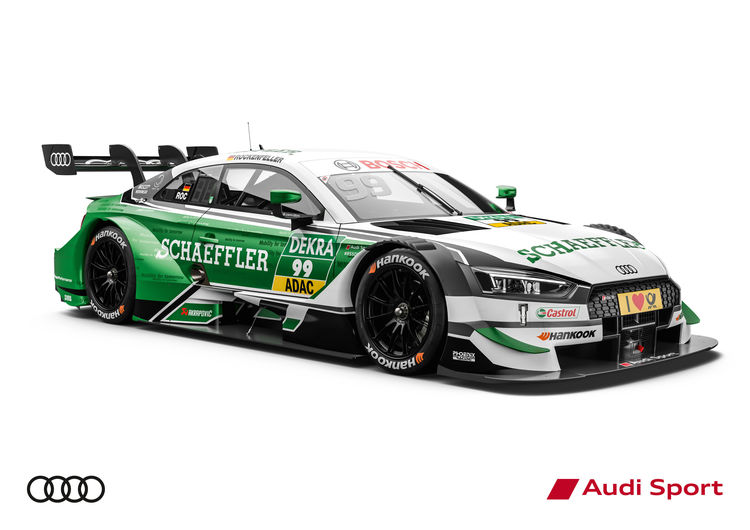