e-tron: Heading for the future on electric power

Progress feels electric: Audi commits to electric mobility – at the end of 2017 on the race track with a factory-backed team of its own in Formula E, and from 2018 onward with the e-tron and numerous other production models on the road.

Audi has a clear vision for the future. As early as by 2025, one in three Audi cars delivered is planned to be an electric vehicle. Even before this date, the portfolio of the brand with the four rings will include more than 20 electric and plug-in hybrid vehicles – spread across all segments and all models.

Motorsport, once again, is assuming a pioneering role in this context. For nearly 40 years, Audi has been active in motorsport on the highest level in order to test new technologies for production. quattro, TFSI, TDI and hybrid are now followed by e-tron. The Audi e-tron FE04 is the group’s first fully electric race car.

“With our involvement in Formula E, we are also showing in motorsport what the transformation from an automobile manufacturer to a forward-thinking mobility provider looks like,” says Rupert Stadler, Chairman of the Board of Management of AUDI AG. “With our concept of sporty electric mobility we demonstrate Vorsprung durch Technik and show how much fun a driver will have in an electric automobile.”

The first vehicle to be launched in 2018 will be the sporty Audi e-tron SUV, enabling a range of more than 500 kilometers.  It will be followed in 2019 by a four-door grand tourer. In 2020, Audi will be extending its electric offering by a compact model. From 2021 on, all the core model ranges are planned to be electrified, including mild hybrid technology. Including the planned volume growth, a third of all Audi models will be electrified in 2025 – either fully electric or with a plug-in hybrid.

Since as far back as the late 1980s, Audi has been developing models with fully electric or hybrid drive. An initial production automobile available with a combination of an internal combustion engine and an electric motor was the Audi duo with the body of an Audi A4 Avant in 1997. A technological milestone for electric cars was marked by the Audi R8 e-tron, unveiled at the IAA in 2009 and in 2012, on setting a record lap, it was the fastest electric automobile on the Nordschleife of the Nürburgring.

Since 2014, Audi has been offering its first plug-in hybrid, the 150 kW (204 hp) Audi A3 e-tron. 2016  saw the debut of the Audi Q7 e-tron – powered by a combination of a 3.0 TDI engine and an electric motor with combined output of 275 kW (373 hp) and torque of 700 Nm. In all-electric mode, it achieves a range of up to 56 kilometers producing zero local emissions. It is the world’s first plug-in hybrid with a V6 diesel engine and quattro drive. In addition, the A6 is produced and offered in a hybrid version on the Chinese market.

The combination of a TDI engine and electrified drive was successful in motorsport as well. Audi was the first manufacturer to win the 24 Hours of Le Mans with the R18 LMP1 sports car and the FIA World Endurance Championship (WEC) with hybrid drive.

As the first German automobile manufacturer to do so, Audi is now racing in Formula E as well. With electrification in motorsport and production, Audi is consistently pursuing the path into the electric future.

The four-door design vision Audi Aicon provides a glimpse of the decade after next. The brand with the four rings unveiled a fully automated Audi of the future at the 2017 IAA. In a visionary way, the technology showpiece combines innovations in the areas of the powertrain and chassis, digitalization and sustainability. The Aicon is designed for all-electric operation and is supposed to be able to cover distances between 700 and 800 kilometers on a single battery charge. 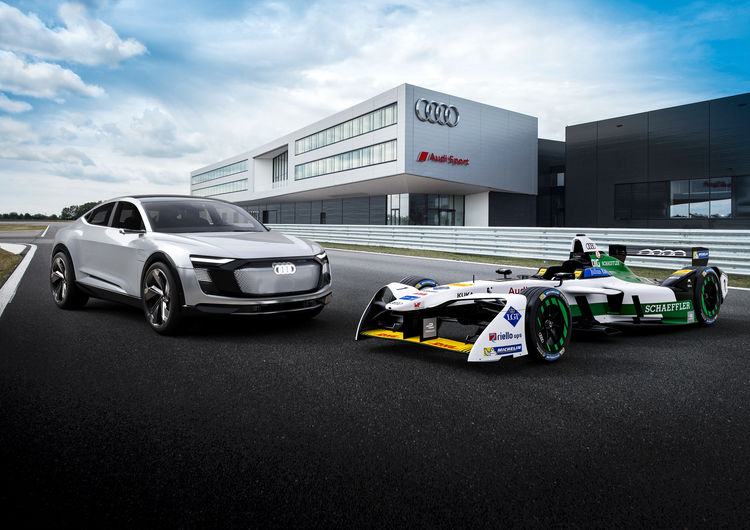