Audi in Formula E 2017/2018: An emotional experience of electric mobility

Audi is the first German automobile manufacturer to race in Formula E. The brand with the four rings is taking ABT Sportsline’s slot on the FE grid in the 2017/2018 season. The Allgäu-based team has been successfully present in Formula E ever since the inception of the electric racing series and in the future will be taking care of the e-tron race cars as the fielding team. Competing for Audi will be new addition Daniel Abt (Germany) and title defender Lucas di Grassi (Brazil).

Audi has been giving its name to the team since Formula E’s inaugural season in 2014 and in the Brazilian Lucas di Grassi previously providing one of its factory drivers. In addition, the Allgäu-based team used the infrastructure of the Competence Center Motorsport in Neuburg. For the 2016/2017 season, Audi intensified the partnership in the form of financial and technical support. Now, on taking over ABT Sportsline’s entry slot, the final step has been made toward a full-fledged factory-backed commitment – under the team name of Audi Sport ABT Schaeffler.

“We’ve increasingly intensified our support of the Formula E project in recent months – on the race days, in the development of the new powertrain and in numerous off-track activities as well,” says Peter Mertens, Member of the Board of Management, Technical Development, AUDI AG. “We are the first German automobile manufacturer to be actively involved in this racing series. This is also a clear commitment of our brand to electric mobility: on the race track as of December and next year on the road as well with the new Audi e-tron.”

The fourth Formula E season kicks off in Hong Kong on December 2 and will subsequently take the campaign to South and North America, Africa as well as to the European metropolises of Berlin, Paris, Rome and Zurich. “Formula E delivers spectacular motorsport in the hearts of fascinating cities and is a tremendous stage to present electric mobility and motorsport in their most emotive forms,” says Head of Audi Motorsport Dieter Gass. “We experienced an extremely exciting 2016/2017 season in which Lucas di Grassi clinched the title. I’m happy that now everything has been put on track for a successful future and that in the Audi e-tron FE04 we’re putting our first fully electric race car on the grid.”

“We’re proud that as one of the founding members we’ve added a chapter to motorsport’s history books,” says Hans-Jürgen Abt. “Within the space of just a few years, Formula E has seen such a strong development that a team can no longer be competitive without the backing of an automobile manufacturer. That’s why we’re gladly handing over the reins to Audi – a partner we’ve been successfully cooperating with in motorsport and routine business for many decades. There’s no doubt in my mind that we’re going to continue this success story in Formula E as well.”

Together with official technology partner Schaeffler Audi has developed a new powertrain that will be fielded in the Audi e-tron FE04 in the 2017/2018 season. “We’ve already successfully completed initial tests with the new components,” says Dieter Gass. At the moment, the freedom in Formula E granted to all manufacturers is limited to the motor, transmission, the respective suspension components and to software. “The competitiveness in Formula E between manufacturers, teams and drivers is enormous. That makes details in the development all the more crucial,” says Gass.

“In Formula E, we’re able to explore extremes,” says Prof. Peter Gutzmer, Deputy CEO and Chief Technology Officer of Schaeffler AG. “At Schaeffler, we have and keep gathering a wealth of know-how in the combination and interaction of units: in Formula E between the electric motor and the transmission. Plus, motorsport means emotion – and that’s what we need in electric mobility too.”

Alejandro Agag, CEO of Formula E says: “We are delighted that Audi is now officially joining the ABB FIA Formula E Championship. The brand has a long and successful heritage within motorsport and continues to excite with its spirit and innovative approach both on and off the track. In only three seasons, Formula E has picked up great momentum and I am sure that Audi will play an important role in the future of the series, and the electric revolution. Audi Sport ABT Schaeffler start their campaign with Lucas di Grassi as Formula E’s reigning champion and will be one of the teams to pay attention to in the upcoming season.” 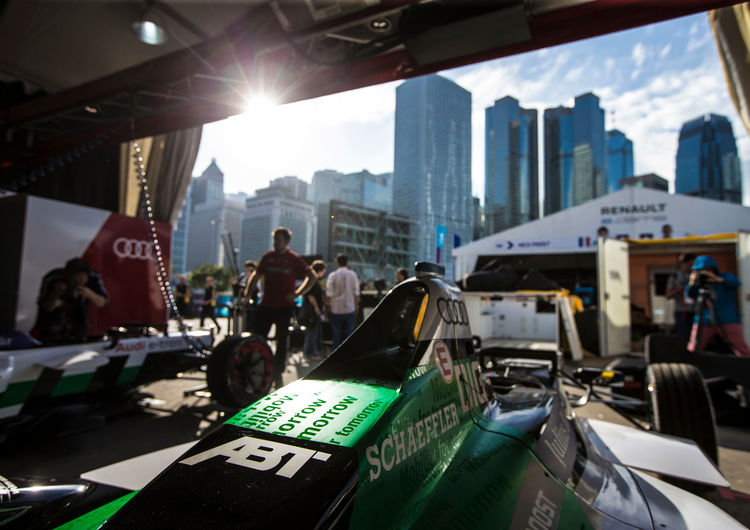