The new Audi TT – an update for the design icon 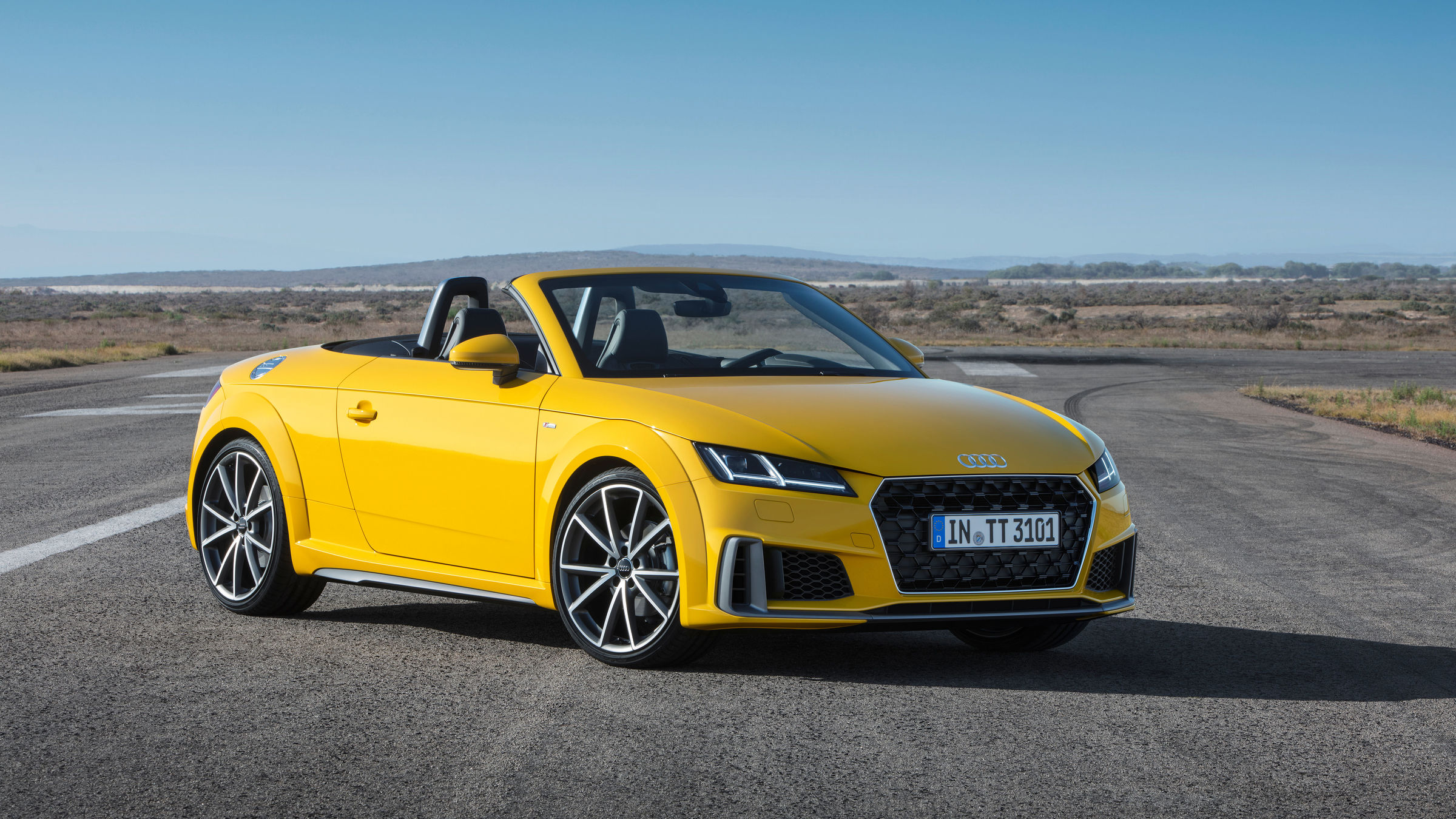 The first generation of the Audi TT made its series premiere in 1998. Three years before, Audi had already presented the TT as a concept car – as a Coupé at the IAA in Frankfurt and as a Roadster at the Tokyo Motor Show. Within a short time after the market launch, the TT Coupé had moved to the top of the segment.

The Audi TT stands for driving pleasure, design and close attention to detail: aluminum elements in the driver-oriented interior, progressive rim design, a short, ball-shaped gear lever knob, characteristic tank cap and round, dual-branch tailpipes are among the typical features of this compact sports car. The design with its incisive geometrical forms has fans throughout the world.

Right on time for the 20th anniversary of the first Audi TT, the brand is especially highlighting the sports car character of the new model. Audi has accordingly refined the design of the new TT, enhanced its performance and extended the range of standard equipment. Besides the driver-oriented Audi virtual cockpit, the basic version of the new model now includes the Audi drive select dynamic handling system, a light and rain sensor, heated exterior mirrors as well as the multifunction steering wheel plus, which allows the infotainment and voice control system to be controlled entirely at the steering wheel. Also standard are the illuminated USB ports and Bluetooth for wireless pairing of terminal devices.

Sporty and expressive: the exterior design

Masculine, progressive and even sportier – that’s the exterior design of the new TT. The front features a three-dimensional Singleframe radiator grille. Large side air inlets emphasize the width even in the basic version.

At the rear, horizontal lines again underscore the width of the new Audi TT. No cap lies underneath the tank flap in the classic TT design; the driver can insert the gas pump nozzle directly into the port – a typical sports car feature. Headlights with LED or Matrix LED technology are optionally available. The dynamic turn signals are a visual highlight here.

The TT Coupé and the TT Roadster are each 4.19 meters (13.7 ft) in length. Both body variants have short overhangs; their wheelbase measures 2.51 meters (8.2 ft). The new TT leaves the factory on 17-inch wheels; Audi and Audi Sport optionally offer 18-, 19- and 20-inch wheels. Three new colors complete the range of paint finishes: cosmos blue, pulse orange and turbo blue (S line and TTS only).

For the TT engines, Audi offers a seven-speed dual-clutch transmission; the S tronic is standard on the TTS. The 45 TFSI is also available with a six-speed manual transmission. In both types of transmission, the close-ratio lower gears enable powerful acceleration, while the wide ratio of each transmission’s highest gear reduces the engine speed and with it fuel consumption.

The 45 TFSI with 180 kW (245 hp) can be combined with the quattro permanent all-wheel drive (combined fuel consumption in l/100 km: 7.3 – 7.0* (32.2 – 33.6 US mpg); combined CO2 emissions in g/km: 166 – 160* (267.2 – 257.5 g/mi)), whose hydraulic multi-plate clutch is designed for the utmost dynamic and efficiency. The quattro is standard on the TTS, as is the Audi drive select dynamic handling system, used by the driver to select the different modes. The system can also influence the optionally available Audi magnetic ride adaptive damper control (standard in the TTS).

The new Audi TT and the new TTS offer handling that is both dynamic and precise. If the customer chooses the S line sport package or Audi magnetic ride, the body is ten millimeters lower (0.4 in). Other suspension highlights include progressive steering, four-link rear suspension and Electronic Stabilization Control (ESC). The wheel-selective torque control is activated in fast cornering and improves handling as necessary by means of precise brake interventions on the unloaded wheels on the inside of a curve.

Driver-oriented: the cockpit and the assistance systems

The sports car character is also underscored by the driver-oriented interior with its clear body lines. The slender instrument panel resembles an aircraft wing; the round air vents with integrated controls suggest jet engines – a classic TT detail.

Sport seats with integrated head restraints are standard on the Audi TT. S sport seats (standard in the S line sport package and TTS) with pneumatically adjustable sport seats are optionally available. The luggage compartment of the 2+2 seater affords 305 liters of space (10.8 cu ft) underneath the stretched tailgate (280 liters [9.9 cu ft] on the Roadster).

All indicators appear in digital form on the 12.3-inch display of the Audi virtual cockpit. The driver can choose between two modes: in the classic view, the speedometer and tachometer take center stage. In Infotainment mode, content such as the navigation map is enlarged. The optionally available sport display provides information on the engine output, torque and g forces called upon. This display is standard on the TTS.

The MMI terminal on the center console has just six keys. The top-of-the-line MMI navigation plus with MMI touch integrates on the upper surface of the rotary/push-button control a touchpad that recognizes handwritten input and allows zooming, for example. The voice control system understands numerous formulations from everyday speech.

Audi connect brings various online services onboard via fast LTE. The Audi smartphone interface connects the smartphone to the car and plays content seamlessly to the Audi virtual cockpit via USB. The high-end solution when it comes to hi-fi is the Bang & Olufsen Sound System. Its amplifier has 680 watts of power and 14 channels. It fills the interior with sound via twelve speakers, including two center speakers and two bass boxes.

The driver assistance systems embody the TT philosophy: they relieve the driver of work, so that he or she can fully concentrate on the road. The lineup extends from the lane change assistant Audi side assist, the lane departure warning system Audi active lane assist and traffic sign recognition to the park assist with display of the surroundings and a rearview camera.

Like every open-top Audi, the new TT Roadster and TTS Roadster come with a soft top in either black or gray. The soft top has a taut fit, and its excellent sound insulation makes it an “acoustic top.” At 39 kilograms (86.0 lb), the top is very light and doesn’t compromise the luggage compartment. A standard feature, the electrical drive opens and closes the top in around ten seconds at vehicle speeds of up to 50 km/h (31.1 mph).

On the occasion of the 20th anniversary of the TT Audi is bringing out the “TT 20 years.” The anniversary model is limited to 999 cars and incorporates numerous details of the Roadster concept car. In the interior, the fine Nappa leather in moccasin brown with specific Panuka contrasting stitching and decorative leather strip recalls the beginnings of TT history. A badge with consecutive numbering as well as “TT 20 years” badges on the steering wheel and gear lever knob adorn the cockpit. Other highlights are stainless steel tailpipes in a specific design, Matrix OLED rear lights and matt-finished Audi rings above the side sills. The “TT 20 years” comes in the colors arrow gray and nano gray.

The “TTS competition” special model” adds an athletic touch – with LED headlights, Audi rings laminated on the side sills, privacy glazing (Coupé only), a fixed rear wing, red-painted brake calipers, 20-inch wheels in high-gloss black and other exterior details in gloss black. The exclusive interior is impressive with two leather packages in different colors, among other highlights.