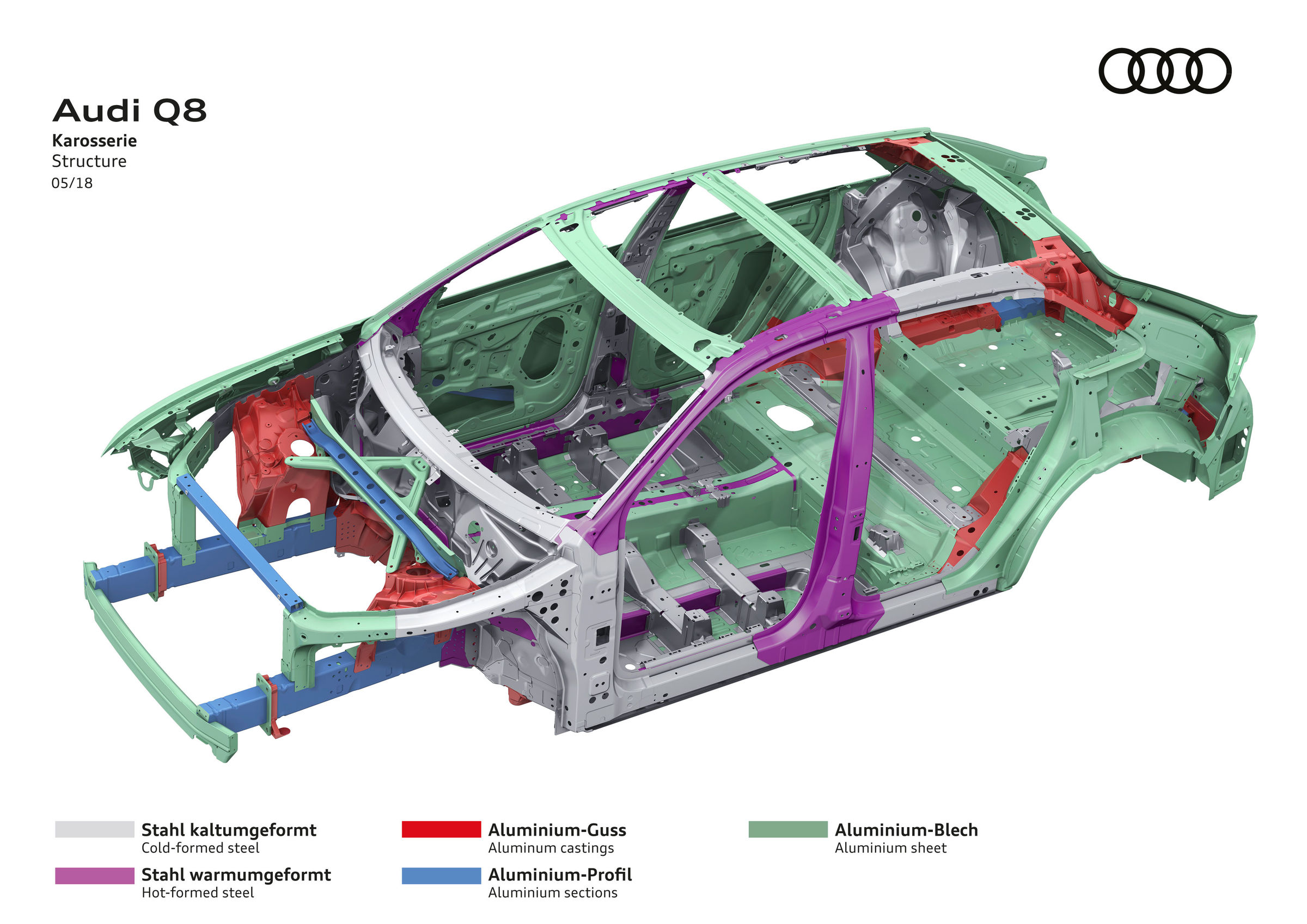 Intelligent mix: the multi-material ASF
The body of the Audi Q8 is based on the Audi Space Frame (ASF) in multi-material construction. It presents an intelligent mix of materials, including many parts made of aluminum and hot-shaped steel. The Audi Q8 50 TDI has an unladen weight of 2,145 kilograms (4,728.9 lb) – including the elaborate MHEV technology with lithium-ion battery.

Hot-shaped steel components comprise 14.4 percent of the body-in-white’s weight and form the ultra-high-strength backbone of the occupant cell. They are used in the lower section of the bulkhead, in the side sills, the rear longitudinal members, the B-pillars and the front zone of the roof frame. In some areas, Audi uses blanks with tailored, variable wall thicknesses between barely one and a good two millimeters (0.04 and 0.1 in). These tailored blanks combine low weight with high strength.

Aluminum castings, such as the strut mounts in the engine compartment and the connecting points between the sills and longitudinal members, comprise 15.0 percent. 2.4 percent is due to the aluminum profiles that make up the front sections of the longitudinal members. The side panel as well as large areas of the floor, the rear wheel housings and the roof are mode of aluminum sheet, as are the frameless doors, the front fenders and the rear hatch. They comprise 23.7 percent.

Composed: rigidity and aeroacoustics
The body of the Audi Q8 stands out for its high rigidity, due in part to a new concept for the torsion rings. Integrated into both the front and rear ends, they are the foundation for the precise handling of the SUV coupé, be it fast and agile driving on paved roads or when driving off-road. Their optimized structure in the rear end made it possible to eliminate the C-pillar without sacrificing comfort or safety. In a head-on collision, the three stress planes in the front end absorb the forces. The reinforcements of the longitudinal members have variable wall thicknesses, which leads to controlled deformation.

The interior of the SUV coupé is very quiet thanks to elaborate sound insulation and sophisticated aeroacoustics. A double-layer windshield is standard. Audi also offers acoustic glazing for the side windows as an option. The frontal area of 2.84 m2 (30.6 sq ft) and a Cd value of 0.34 ensure relatively low drag. This puts the Audi Q8 on a level with its competitors, with drag similar to that of the Audi Q7.