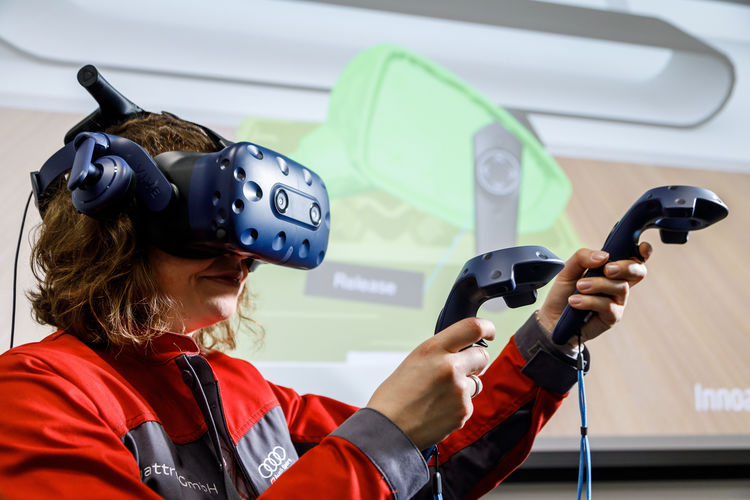 Shelves that label themselves, cooperation in virtual spaces, and high-performance computers that make autonomous decisions: In the Supply Chain department at Audi, this is no longer a future vision - as is demonstrated by selected examples at different production sites.

The company tested digital shelf labeling at the Audi plant in Győr, Hungary, for the first time last year. This new technology is equipped with what are known as e-ink displays, which are also used in e-book readers, and offers significant added value. When names, numbers, or the arrangement of the parts in the shelf change, the logistics specialists no longer need to update the labeling by hand. Information can also be displayed at short notice quickly, for example if a part is out of stock and is to be replaced with a different part. Another advantage is that the digital displays always stay clean, do not generate any waste paper, and consume only very little electric energy, even in continuous operation. The German/Hungarian project team is currently enhancing the technology. One of the goals is to implement fully automatic updates. Series production in the near future is conceivable, including at other Audi sites. With digital shelf labeling, Audi is taking another step toward paperless order picking. When gathering parts, Audi employees already usually work with tablets and hand-held scanners today.

Digital helpers like these are just one example of the use of smart technology in the automotive manufacturer’s Logistics division. “We are making targeted use of the advantages of digitalization at our production sites worldwide” says Dieter Braun, Head of Supply Chain. The driverless transport systems that have been in use at the Audi plants for many years are another example. They transport parts to the workstations automatically, for example in the electric motor production in Győr, where there is no assembly line. They use laser scanners to orient themselves in the production hall and find the optimum route. This highly flexible procedure is made possible by algorithms and machine learning, controlled by a smart IT system in the control station. This enables IT to keep track of all systems, all driverless transport vehicles, and the product, even without a fixed assembly line sequence.

At Pre-Series Logistics in Ingolstadt, Audi is currently the first automotive manufacturer to try out a new driverless transport system, which follows people around. The “Effibot” uses laser sensors to detect the employee’s legs and follows them automatically at low speed. All it takes is a touch of a button – the system requires neither complicated adjustments nor a special infrastructure. It also offers an autonomous driving function that allows the “Effibot” to head for previously defined destinations independently. The employees welcome the pilot project: They have an assistant that helps them with their work and they no longer need to push order picking trolleys by hand.

Another smart solution brings Audi employees worldwide together: They use virtual reality (VR) to work together group-wide and across locations in virtual spaces. In Packaging Logistics, for example, employees have been training with VR for several years. The training is designed like a video game and can be adapted to suit other activities as well – no programming skills are required. The company is also counting on VR technology in the production of the Audi e-tron GT, which will roll off the line at the Böllinger Höfe starting in 2020 together with the Audi R8: As part of a pilot project, the logistics planners in Neckarsulm are currently testing how special containers can be planned and tested entirely in a virtual space and without any physical prototypes. These containers are used for particularly sensitive parts such as electrics, headlights, or the windshield. They are custom-made for this task and their planning takes a corresponding amount of effort. Developing the special containers with VR is less expensive and is also better for the environment.

The Smart Decisions team at Audi addresses even more complex planning processes. The experts “translate” a wide range of issues into mathematical models, and a high-performance computer uses these as a basis to find solutions for logistics-related problems, for example the external storage forecast. As part of the delivery process, certain models may have to be put into interim storage for a short time. But which of the storage areas is suitable? Numerous factors play a part in answering this question: For example, the distance between the respective parking lot, the plant and the delivery destination, the cost for transportation between these stations, or the capacity of the parking lots. The mathematical model created by the Smart Decisions team allows these vehicles to be distributed optimally among the storage areas. The prototype is finished and further development is underway – as is the case with numerous promising digital projects in Audi Logistics.