Audi presents latest lighting technology at the IAA in Frankfurt

Todays episode of #WhatsupAudi is all about light. We will tell you everything you need to know about Audis signature feature and show you what is planned for the future. You can find more details here: https://www.audi-mediacenter.com/en/presskits/audi-techtalk-light-13349 --- Welcome to the Audi YouTube channel, the home of “Vorsprung”. On this channel, you’ll find first-hand information on us as a company, innovations and coverage of exciting model releases. Be prepared for fascinating formats and the reporting of important events. Subscribe for thrilling insights, diverse opinions and new perspectives on the brand with Four Rings and become a member of a worldwide community of automotive aficionados. Imprint: https://www.audi-mediacenter.com/en/imprint-3697
YouTube
{{ activeItem() }}
Facebook
01/20/21
Top gear. 📸 Auditography - Unique Audi photography #AudiRS5 -------------------- Fuel consumption combined: 9.2 l/100 km; CO2-emissions combined: 209 g/km // Further information: www.audi.com/dat
01/18/21
All spark. #Audi #etronS #etronSportback -------------------- Combined electric power consumption: 28.1 – 26.4 kWh/100 km; Combined CO2-emissions: 0 g/km // Further information: www.audi.com/dat The displayed vehicle shows optional equipment at extra charge. Individual equipment will be available at a later date.
01/15/21
That hybrid lifestyle. #AudiQ5 #Hybrid -------------------- Combined fuel consumption in l/100 km: 2.4 – 2.0; Combined electric power consumption in kWh/100 km: 19.1 – 17.5; Combined CO2 emissions in g/km: 54 – 46 // Further information: www.audi.com/dat
01/12/21
Attitude and the city. #AudiQ2
Audi on Facebook 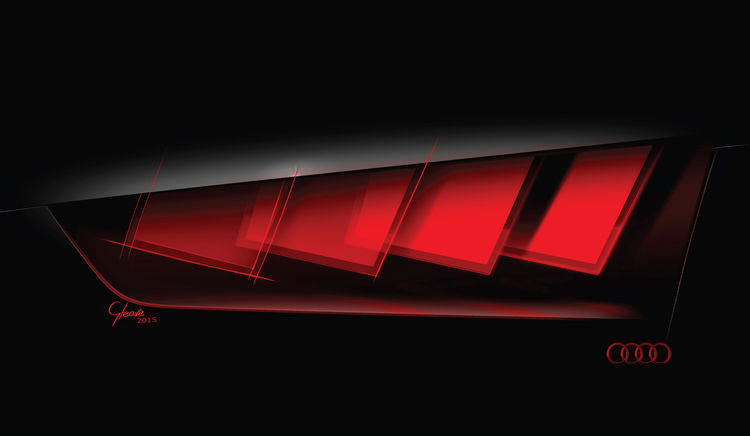 Audi is presenting its next step in automotive lighting technology at the IAA in Frankfurt. The new Matrix OLED lights enable a previously unattainable level of lighting homogeneity, opening up further creative opportunities for design.

As the leading brand in automotive lighting technology, Audi has systematically developed all aspects of OLED technology over the years. Matrix OLED lights combine high‑tech engineering and design ideally – initial projects are currently underway to implement OLED technology in production tail lights. They are being shown for the first time in a concept car at the IAA.

OLED is an English acronym for “organic light emitting diode.” In each OLED unit, two electrodes – of which at least one must be transparent – incorporate numerous thin layers of organic semiconductor materials. A low DC voltage – between three and four volts – activates the layers, each of which is less than one‑thousandth of a millimeter thick, to light them. The color is based on the molecular composition of the light source.

In contrast to point light sources – such as LEDs – which are made of semiconductor crystals, OLEDs are flat light sources. Their light attains a new level of homogeneity, and its dimming is continuously variable. The lights do not cast any shadows and do not require any reflectors, light guides or similar optical components – and this makes the OLED units efficient and lightweight. In addition, they hardly need any cooling.

Progress in OLED technology is being made rapidly – in part due to the driving force of Audi. As soon as further increases in light density are realized, OLEDs will soon be able to generate turn signal and brake lights too. The thin glass sheets that are used today to encase the organic material will be replaced by plastic films. These new flexible substrate materials will lend themselves to three‑dimensional forming, and this will open up entirely new creative spaces for designers.

Audi has already shown the potential of OLED technology in many models and demonstrators. Special highlights are “OLED lighting” with transparent, multi-colored OLEDs in the silhouette of the car and “the swarm” with a three-dimensional OLED display.

Another benefit of OLEDs: They can be subdivided into small segments that can be controlled at different brightness levels. In addition, different colors and transparent OLED units will be possible. This enables new lighting scenarios with extremely fast switchover times. The illuminated sub-surfaces exhibit very precise boundaries with one another. This is what distinguishes OLED technology at Audi, transforming it into the Audi Matrix OLED technology that supplements Audi Matrix LED and Matrix Laser technologies for headlights.