Audi delivers over 100,000 electric models in 2022 –
despite challenging environment 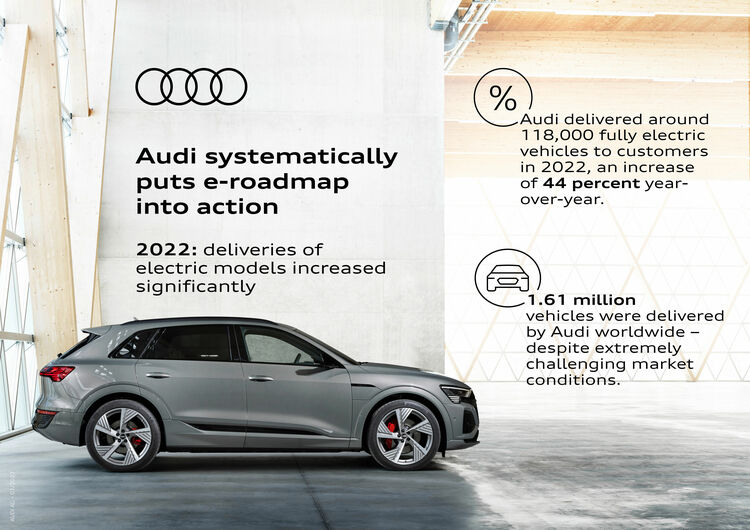 In 2022, Audi was once again able to significantly increase deliveries of all-electric cars: with an increase of around 44 percent, the brand systematically continued its electrification strategy, thereby maintaining its course in a year characterized by global crises. In total, Audi sold over 1.61 million vehicles last year, which was close to the previous year’s level despite prolonged supply bottlenecks and major challenges in the logistics chain. Audi beat 2021’s results in Europe, Germany, and more core markets.

“The strong numbers for the all-electric models show us that our clear focus on electric mobility is the right path,” says Hildegard Wortmann, Member of the Board of Management for Sales and Marketing at AUDI AG. Overall, Audi delivered 118,196 electric models to customers last year, which is 44.3 percent more than in 2021.

The high demand for the all-electric models Audi Q4 e-tron, Audi e-tron GT quattro, and Audi e-tron affirms the company’s clear decision in favor of an all-electric future and will increase Audi’s momentum on its path toward becoming a sustainable premium mobility supplier. A new model is already waiting in the wings: the new Audi Q8 e-tron is continuing the Audi e-tron’s success story as an electric pioneer. The model has already received many preorders ahead of its market launch in the spring of 2023. Starting in 2026, Audi will only introduce all-electric cars to the global market.

“In a challenging and dynamic environment, our global team once again proved its resilience in 2022,” says Hildegard Wortmann. “Thanks to extraordinary team spirit, operational excellence and effective sales control, we were able to close out the business year successfully.”

Alongside the all-electric models, the Audi A3 (+12.1 percent), Audi A4 (+8.0 percent), and Audi Q5 (+2.7 percent) saw particularly large increases within the overall portfolio. Audi Sport also had a special year in 2022: deliveries of 45,515 high performance cars mean a new record and an increase of 15.6% year-over-year.

Sales in Germany were a particularly strong contributor to the positive trends in Europe (214,678 vehicles, +18.7 percent). A significant increase in fully electric model deliveries (+87.8 percent) made up a large portion of those. The company increased its market share here considerably, also due to a strong increase in deliveries of all-electric models (+87.8 percent). Audi Sport also set a new record in the company’s home market with 12,993 models sold for an increase of 43 percent.

Demand for all-electric Audi models was as high as ever in the US in 2022. That is evident from the record 16,177 vehicle sales – an increase of 47.3 percent over 2021. There were 10,397 Audi e-tron sales alone, marking an increase of 7.2 percent. Since the launch of the Audi Q4 e-tron and Audi Q4 Sportback e-tron, Audi has the largest portfolio of electric cars in the market. Due to logistics and supply bottlenecks, the total number of vehicles delivered in the US was 186,875, slightly below the previous year at -4.7 percent. However, customer demand continues to be high.

The company delivered a total of 642,548 cars in China, which is 8.4 percent fewer than the previous year. The decline was due to the ongoing supply bottlenecks, particularly in semiconductors, as well as production limitations due to COVID-19. At the dealerships, constraints caused by the Covid pandemic also made themselves felt in temporary showroom closings. The number of fully electric models that were delivered increased by 9,8 percent. In 2022, the company successfully grew its electric portfolio in China with the new Audi Q5 e-tron Roadjet, the Audi Q4 e-tron and the Audi RS e-tron GT. Further increases were achieved by the Audi A3 (+ 10.0 percent), Audi A4 (+14.9 percent), and Audi Q5 (+4.5 percent).

Demand for fully electric models in further markets around the world increased by 90.2 percent. In total, Audi delivered a total of 160,310 cars (-3.5 percent) in these markets, that, in addition to challenges in the supply chain and ongoing logistics bottlenecks, were also impacted by geopolitical crises. The company achieved significant growth, especially in the Middle East (+47.9 percent), India (+27.1 percent), and Taiwan (+22.2 percent).

“Even though we’re still facing global economic challenges, we’re looking toward the future with confidence,” says Hildegard Wortmann. “That’s because we’re going into 2023, during which we will accelerate the transformation together, with an attractive portfolio, a large number of orders and a highly motivated team.”

Notice for the editors: The financial figures for the 2022 business year will be presented at the annual media conference on Thursday, March 16, 2023.