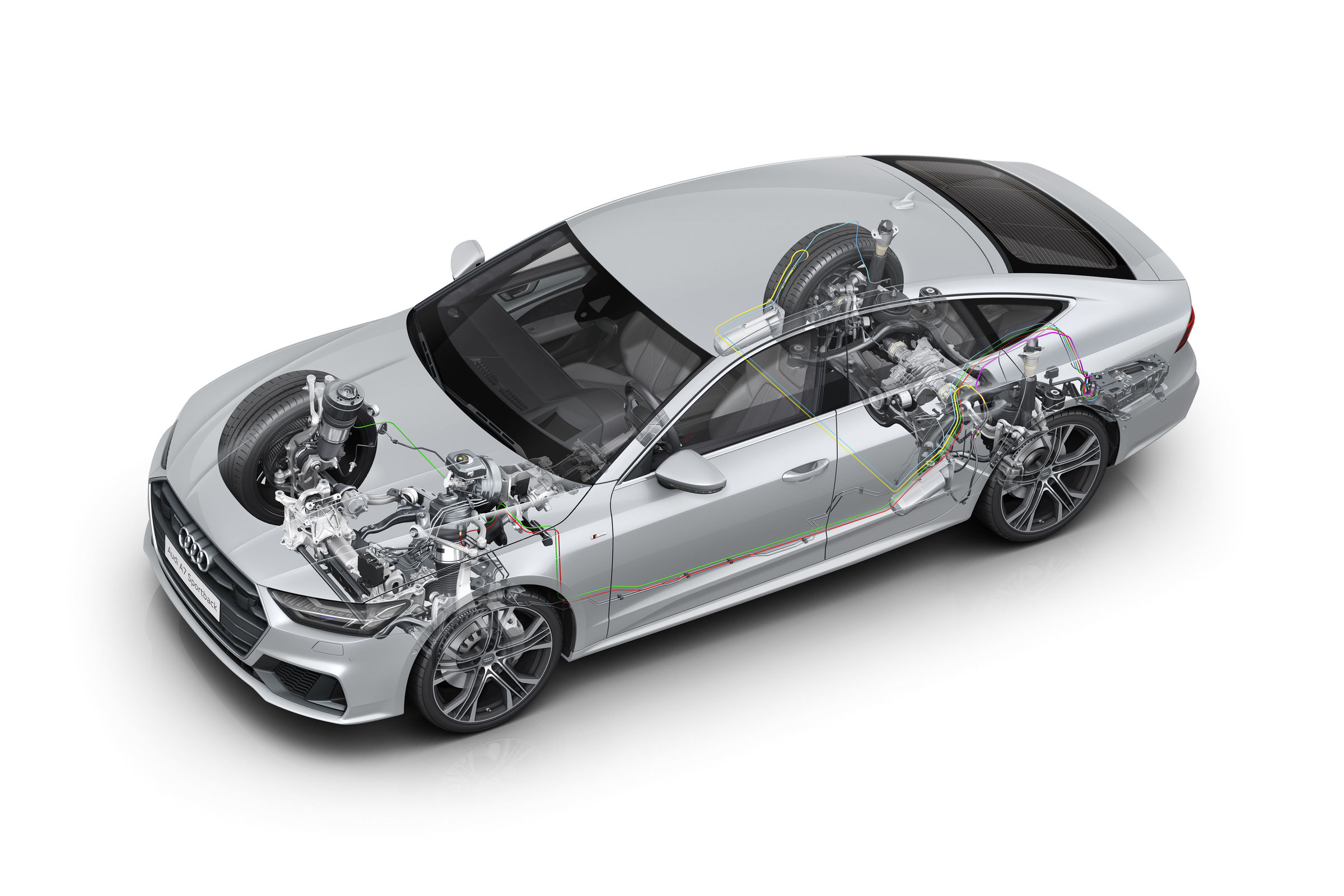 The Audi A7 Sportback impresses with even more dynamic driving on the one hand and increased comfort on the other. Thanks to numerous chassis innovations, the Gran Turismo from Audi offers a new range between comfort and dynamics. The mild-hybrid technology, which is also new, makes the drive system even more efficient and at the same time more comfortable. Furthermore, the A7 will be hitting the road with updated engines.

New chassis components enable the four-door Gran Turismo to perfect its synthesis of sportiness and long-distance comfort. The new Audi A7 Sportback handles more agilely and spontaneously yet is also safer and more comfortable. This has been achieved using innovative technologies such as dynamic all-wheel steering, damper control and controlled power distribution by the quattro sport differential. The central control of these system via the electronic chassis platform (ECP) make this synthesis of sportiness and comfort possible.

At speeds up to 60 km/h (37.3 mph), the rear wheels are turned as much as five degrees in the opposite direction. This reduces the turning circle by up to 1.1 meters (3.6 ft), and the car becomes more agile in city traffic, when maneuvering and in tight switchbacks. At 60 km/h (37.3 mph) and above the rear wheels turn in the same direction as the front wheels. Consequently the new A7 Sportback is even more stable and the road and performs abrupt evasive maneuvers with composure. In many cases the Electronic Stabilization Control (ESC) does not have to intervene. If the turn-in of the rear wheels is also considered, the dynamic all-wheel steering can vary the steering ratio between 9.5 and 16.5:1.

The steering tuning of the standard progressive steering and optional dynamic all-wheel steering provides for intense, responsive feedback from the road and improved steering feel. Already sporty, the steering becomes increasingly direct with increasing steering angle. With both steering systems, the electromechanical power steering achieves the optimum between comfort and dynamic feedback. It conveys useful information to the driver and filters out unpleasant jolts. The connection between the steering wheel, wheels and the road is direct and tight.

An even wider spread between comfortable and sporty suspension tuning and an expanded range of suspension choices make the A7 the perfect Gran Turismo. Both the front and rear axles of the new Audi A7 Sportback are five-link constructions made largely of aluminum. Two subframes – the front rigid, the rear hydraulically mounted – attach them to the body. The track is 1,651 millimeters (5.42 ft) up front and 1,637 millimeters (5.37 ft) in the rear. Audi offers several alternatives instead of the controlled standard suspension: A sport suspension for a decidedly sporty suspension tuning that lowers the body 10 millimeters (0.4 in) (standard with the S line sport package, plus 20-inch wheels) and a suspension with damper control. Its management is comfort-oriented and has been converted to an energy-efficient concept – higher current only flows when the valves are closed to set the dampers to hard.

The third option is the particularly comfortable adaptive air suspension, also with controlled damping. It can be set to three modes and includes a “lift” position for poor roads and automatic leveling. In “auto” and “comfort” modes, it lowers the body by 10 millimeters (0.4 in) at speeds above 120 km/h (74.6 mph), further improving airflow and stability.

The electronic chassis platform (ECP) coordinates the controlled suspensions. As the central chassis controller, it collects comprehensive information about the movement of the car and the data from the chassis control systems involved. From these, it calculates and precisely coordinates the optimal function of these components in an integrated handling controller. The driver of the new Gran Turismo experiences this advancement as precise handling with increased lateral dynamics and greater comfort.

Besides the dampers, the ECP also controls the dynamic all-wheel steering and the updated sport differential, which actively distributes the drive torque as needed between the rear wheels during fast cornering. The driver can adjust the settings for all controlled components in the Audi drive select dynamic handling system – in the modes comfort, auto and dynamic. The dynamic all-wheel steering varies its ratio and the degree of feedback, for example.

The powerful, fully ventilated brakes are another factor in the new Audi A7 Sportback’s high level of driving safety. The front discs on the A7 Sportback 50 TDI have a diameter of 350 millimeters (13.8 in) (rear: 330 millimeters (13.0 in)) and combine gray cast iron friction rings with aluminum pots. The fixed calipers on the front axle – made of aluminum as standard – each accommodate six brake pistons. Electronic Stabilization Control (ESC) provides even more precise control than in the previous model.

The wheels program for the big coupé starts at 18 inches. With wheels measuring 19 inches and above, torus absorbers – foam pads glued into the tires – reduce unwanted droning frequencies. The standard wheels measure 8.5 J x 21 and are equipped with 255/35 tires. A function integrated into the ESC warns the driver if a wheel is not tight. This warning is unique in the market.

The Audi A7 Sportback is equipped standard with the new mild-hybrid technology (MHEV, mild hybrid electric vehicle) for greater efficiency and comfort. The technology reduces consumption by as much as 0.7 liters of fuel per 100 kilometers in real driving. With the 3.0 TFSI and 3.0 TDI, it is based on a newly developed 48-volt primary electrical system. It comprises a compact lithium-ion battery and a belt alternator starter (BAS) that is connected to the crank shaft.

Between 55 and 160 km/h (34.2 and 99.4 mph), the new Gran Turismo can coast with the engine off when the driver lifts off the accelerator – completely emissions-free for up to 40 seconds. As soon as the driver steps on the accelerator again, the BAS quickly and smoothly restarts the engine. The 48-volt system enables a high recuperation power of up to 12 kW and allows start-stop operation from just 22 km/h (13.7 mph). The engine is started as soon as the vehicle ahead starts moving, even if the driver is still pressing the brake pedal.

The new three-liter V6 is packed with innovations. Its exhaust end lies inside the 90° vee, the short gas paths and the twin scroll charger, which prevents unwanted interactions between the gas columns, guarantee spontaneous throttle response. The B-cycle combustion process, which is designed specifically for part load, makes the V6 gasoline engine particularly efficient. To support it, the Audi valvelift system (AVS) adjusts the intake valve opening times and stroke in two stages based on load and engine speed. The three-liter gasoline unit produces a subtle and sonorous sound that never becomes intrusive even under load. This is due in part to the new tube guide in the dual-branch exhaust system that largely eliminates hum frequencies.

The V6 TFSI has shed 14 kilograms (30.9 lb) and now weighs 172 kilograms (379.2 lb). Its aluminum crankcase features integrated, thin-walled cylinder liners of gray cast iron. In combination with the newly developed rings for the aluminum pistons, this reduces friction. Another efficiency element is thermal management with separate cooling loops for the crankcase and cylinder head. The exhaust manifold is integrated in the cylinder head and bathed in coolant. This helps the engine to heat up quickly following a cold start. When the engine is warm, this solution lowers the exhaust temperature, reducing fuel consumption, particularly during sporty driving.

Additional four and six-cylinder engines will gradually round out the engine lineup in the course of 2018.

For power transmission, the Audi A7 Sportback 55 TFSI is equipped with a seven-speed S tronic, which has been redesigned in many details in view of the high torque. The double-clutch transmission changes gears quickly and almost imperceptibly; thanks to its electrically driven oil pumps and pressure accumulator, it can do so during coasting with the engine stopped.

The 3.0 TDI is mated to an eight-speed tiptronic. An rpm-adaptive torsion damper with a centrifugal force pendulum largely compensates for undesirable vibrations in the engine. This permits efficient driving from engine speeds as low as 1,000 rpm. When coasting and rolling out, a clutch in the central transmission opens and interrupts the power connection. A new electric oil pump makes it possible to engage the gear that will be needed after the rolling phase. The transmission control unit detects stop-and-go situations and ensures very comfortable starts.

The S tronic transfers the engine power to a quattro drive with ultra technology. The drivetrain is highly efficient – it always activates the rear wheel drive when needed. There are no differences in terms of traction and handling compared to permanent systems.