“Vorsprung durch Technik” in the dunes 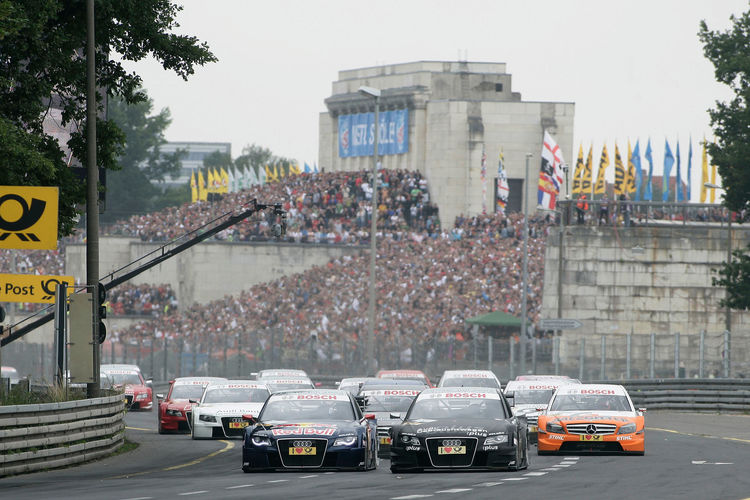 On July 16th the Audi brand will celebrate its 100th anniversary. Only three days later, there may be another reason to celebrate: The 50th Audi victory in the most popular international touring car racing series is possible when the DTM visits the Netherlands.

Audi has impressively demonstrated “Vorsprung durch Technik” on the demanding dune circuit along the Dutch North Sea Coast in recent years. To date, Audi has competed at Zandvoort with the A4 DTM five times, celebrating victory on four of these occasions. Most recently, Audi Sport Team Abt Sportsline triumphed three times in a row, and even 1-2-3-4 exploits were achieved in the past two years.

Audi’s string of victories at Zandvoort is no coincidence. Its highly efficient aerodynamics is one of the Audi A4 DTM’s great fortes and particularly useful in medium-fast and fast corners – and these types of turns abound on the dune circuit.

As early as three years ago the engineers at Audi Sport spearheaded a new trend which the competition has since followed too: Using CFD (Computational Fluid Dynamics) calculations, the air currents flowing around and through the vehicle were separated. With each model year this innovative concept was optimized, enabling two consecutive DTM title wins which have put Audi in a unique position: As the first automobile manufacturer in DTM history, the brand with the four rings has the chance of winning the title for the third time in a row.

Zandvoort is an important stage in this endeavor. For Head of Audi Motorsport Dr. Wolfgang Ullrich’s squad, it is crucial to fully use this technical advantage and to score as many points as possible. The fact that all nine Audi drivers particularly enjoy driving at Zandvoort comes in handy too. Some of them even call the dune circuit their favorite track.

The “King of Zandvoort” is Mattias Ekström: The Swede is the only driver to have won at Zandvoort more than once. In 2002, 2004 and 2008 he crossed the finish line as the winner. In 2006 Tom Kristensen triumphed, in 2007 it was Martin Tomczyk. Title defender Timo Scheider goes to Zandvoort as the leader of the standings.

As usual, ARD will air live broadcasts of qualifying and the race from Zandvoort on “Das Erste.” ARD’s live coverage of the thrilling DTM race at the Norisring was recently watched by 1.62 million viewers, accounting for an impressive market share of 13.5 percent.

Quotes before the DTM race at Zandvoort

Dr. Wolfgang Ullrich (Head of Audi Motorsport): “I’m sure that the circuit at Zandvoort will suit our Audi A4 equally well as it has in the past. The fact that our cars will be slightly lighter than the Mercedes will certainly not be a disadvantage. We’ll give all we’ve got to clinch a big and strong team result and score as many points as possible for Audi.”

Timo Scheider (GW:plus/Top Service Audi A4 DTM #1): “Zandvoort is one of my favorite tracks – maybe it’s even my most favorite one of all. I’ve always driven good races there. The circuit with its many semi-fast and fast combinations of turns has a special appeal – also due to the sand and the wind blowing from the beach. In the past few years we always managed to get a pretty good handle on this, and I’m very confident this time too. I’m happy to be coming to Zandvoort as the leader of the standings and would like to leave again with more than a one-point advantage.”

Mattias Ekström (Red Bull Audi A4 DTM #5): “I won my first DTM race at Zandvoort and have actually got nothing but fond memories of this circuit. Zandvoort is a track that’s fun to drive and one I always particularly look forward to – that’s no different this year. I’ll perfectly prepare myself for the race.”

Tom Kristensen (100 Jahre Audi – A4 DTM #2): “As always, I look forward to Zandvoort – I think I’m not the only driver who does. Generally speaking, I’m happy that, finally, there are real race tracks coming up now that suit a DTM car much better than the two last ones did.”

Oliver Jarvis (Audi Cup A4 DTM #15): “It would be nice to consign the last two races to oblivion. The 08-spec Audi was really good at Zandvoort last year. What’s more, Zandvoort is one of my favorite tracks. I’m confident that I’ll be able to clinch a good result.”

Markus Winkelhock (Playboy Audi A4 DTM #12): “Zandvoort is a circuit that suits me very well. Last year, Audi took positions one to four with the 08-spec car. We’re also in a very good position with regard to weight. I’m going to Zandvoort with a good feeling.”

Mike Rockenfeller (S line Audi A4 DTM #11): “I’m totally looking forward to Zandvoort. That was an Audi track in the past and hopefully will be again this year. It’s a safe assumption for me that we’ll be quick if we come up with the right set-up. I really like the circuit a lot. It’s a real race track with fast turns that require courage.”

Martin Tomczyk (Red Bull Cola Audi A4 DTM #6): “Zandvoort was and continues to be an Audi track. Last year, we clinched a 1-2-3-4 win; that was perfect. We’re expecting to be very strong there this year too. As far as I’m personally concerned, things can only get better than they were at the previous races.”

Katherine Legge (Audi Collection A4 DTM #21): “I can hardly wait to be driving at Zandvoort. Due to the fast turns Zandvoort is one of my favorite circuits. Last year, I was running pretty well there already with the 06-spec car.”

Alexandre Prémat (Audi Bank A4 DTM #14): “I like Zandvoort very much. I almost won there two years ago. The track suits our Audi well and, in addition, we’re driving with less weight than the Mercedes and the 09-spec Audi cars. I’m hoping that we’ll be able to shake off our misfortune of the previous races.”

Hans-Jürgen Abt (Team Director Audi Sport Team Abt Sportsline): “Zandvoort is a very special race for us: In 2002, we clinched our first DTM title there and won four races in the past five years. Norisring is water down the river. For us, the season is just really getting started now!”

Ernst Moser (Team Director Audi Sport Team Phoenix): “I expect that, thanks to our good aerodynamics, we’ll be among the front runners with a year-old car again at Zandvoort too. The Norisring showed that this year anything is possible with a year-old car – including victories. At Zandvoort, Alex (Prémat) previously showed that he’s capable of winning there. Oliver (Jarvis) is highly motivated as well. After two races that proved to be difficult for us we’ll leave no stone unturned to be driving at the very front of the field.”

Arno Zensen (Team Director Audi Sport Team Rosberg): “I’ll just put it in a nutshell: ‘Rocky’ is convinced that he can finish on the podium at Zandvoort – so we’ll just take him at his word. I’m also convinced that Markus will be able to do it.”

Mattias Ekström about the circuit at Zandvoort: “Zandvoort is one of my favorite tracks. There are many nice turns in great combinations there; it’s an undulating track with a fantastic rhythm. In addition, Zandvoort is one of the few circuits at which you can also win from a bad starting position. At the beginning of the weekend the tarmac hardly has any grip. On almost every lap you feel how grip increases. This year, this should be even more noticeable in the race than in the past because we’ve got less time for practice due to the new regulations. The thing I like most at Zandvoort is the many blind turns – that means you’ve really got to have lots of confidence in your car.”


The schedule at Zandvoort