Skip to content
We are using cookies for a better user experience.
10/29/18
Laguna Seca/Neuburg a. d. Donau
Sports 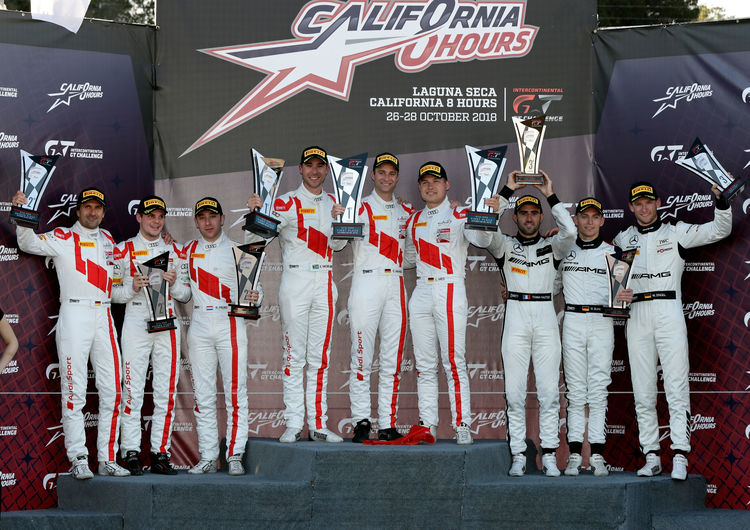 Spectacular finale at the fourth and final round of the Intercontinental GT Challenge (IGTC): At Laguna Seca/USA, Audi Sport customer racing turned a nine-point deficit into an 11-point advantage to secure the title in the manufacturers’ classification for the third consecutive time. This was thanks to a double victory at the California 8 Hours.

After four races on four continents, the 2018 Intercontinental GT Challenge has been decided. In a spectacular eight-hour race, the Audi Sport Team Land with drivers Christopher Haase, Kelvin van der Linde and Christopher Mies (D/ZA/D) swept to victory after 306 laps. Over the entire race distance, a battle for the lead raged on the legendary race track. The number 29 Audi R8 LMS took off from pole position but was thrown down the field by two drive-through penalties. A decisive move was made at the six-hour mark when the team made clever use of a safety car phase to snatch the lead. Earning 25 points for the win and 18 points for second place thanks to Audi Sport Team WRT drivers Robin Frijns/Dries Vanthoor/Markus Winkelhock (NL/B/D), Audi Sport customer racing yielded the best possible result and managed to turn the points deficit into an advantage in the manufacturers’ classification. In the IGTC, the two best-placed vehicles of a brand are eligible for points. The third Audi R8 LMS shared by Stuart Leonard, Sheldon van der Linde and Alex Riberas (GB/ZA/E) finished in fifth place.

With his win at the finale, Christopher Haase ranked second in the drivers’ championship. Audi Sport drivers won this classification in 2016 and 2017. “The eight-hour race on this storied circuit couldn't have gone better,” said Chris Reinke, Head of Audi Sport customer racing. “We experienced everything that makes long distance racing so fascinating and a great team sport at top level motor racing. Mere seconds separated the frontrunners over the entire distance. Ultimately our boys in both cars had the edge today and we’re delighted to take home the third manufacturers’ title in a row. Congratulations as well to Tristan Vautier and Mercedes for winning the drivers’ title. Our balance over three years in the Intercontinental GT Challenge with five of six possible titles underlines what our Audi R8 LMS is capable of. And we've taken it a step further with the new evolution stage for 2019, which we presented here in the paddock. Congratulations to the American squad Rearden Racing for winning the GT4 class.” Vesko Kozarov, David Roberts and Max Faulkner (USA/USA/USA) achieved this success in an Audi R8 LMS GT4, with the driver quartet scoring 16th in the overall classification.