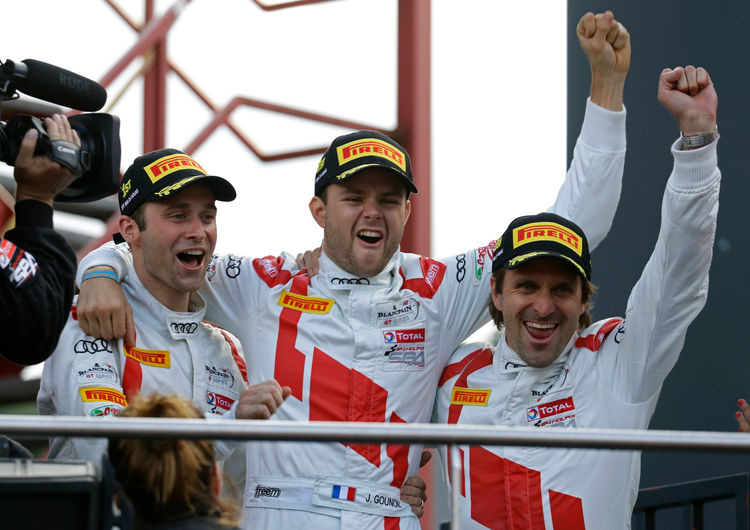 Fred Thalamy, Team Director Audi Sport Team Saintéloc: “This victory is incredible. For us, it’s like Christmas in July! You just can’t describe this feeling. The race was a dream. The car was perfect and incredibly reliable. We didn’t have the slightest problem.”

Jules Gounon (Audi R8 LMS #25): “Sensational. I’m speechless. Audi and our team did a fantastic job. I can’t say thank you often enough – also to Christopher (Haase) and Markus (Winkelhock). They drove sensationally. We had to fight like lions after having lost a lap due to a loose wheel nut. The strategists from Audi and Saintéloc Racing have played a major part in this success as well.”

Christopher Haase (Audi R8 LMS #25): “Awesome! We were two laps behind at the beginning of the night and recovered again. It was such a tough race. I could hardly get out of the car. This is a special moment in my career because this was a race I wanted to win at all costs. On the last two laps, I tried to reduce my pace a little and keep off the curbs. That’s how we did it.”

Markus Winkelhock (Audi R8 LMS #25): “It’s a fantastic feeling. Winning at the Nürburgring and at Spa in a single year is really special. I’ve been able to experience this before with Audi in 2014. I’m just happy, also for Audi Sport customer racing and for Audi Sport Team Saintéloc and the mechanics. The 24 Hours of Spa is the most powerful GT race in the world. That’s what makes this victory so special. Twelve hours ago, we were two laps behind due to a problem during the pit stop, had to return to the pits and lost a minute and a half. Still winning the race after that is simply very cool.”
Download PDF (51.2 KB)
Facebook
Twitter
LinkedIn
WhatsApp
Back to top