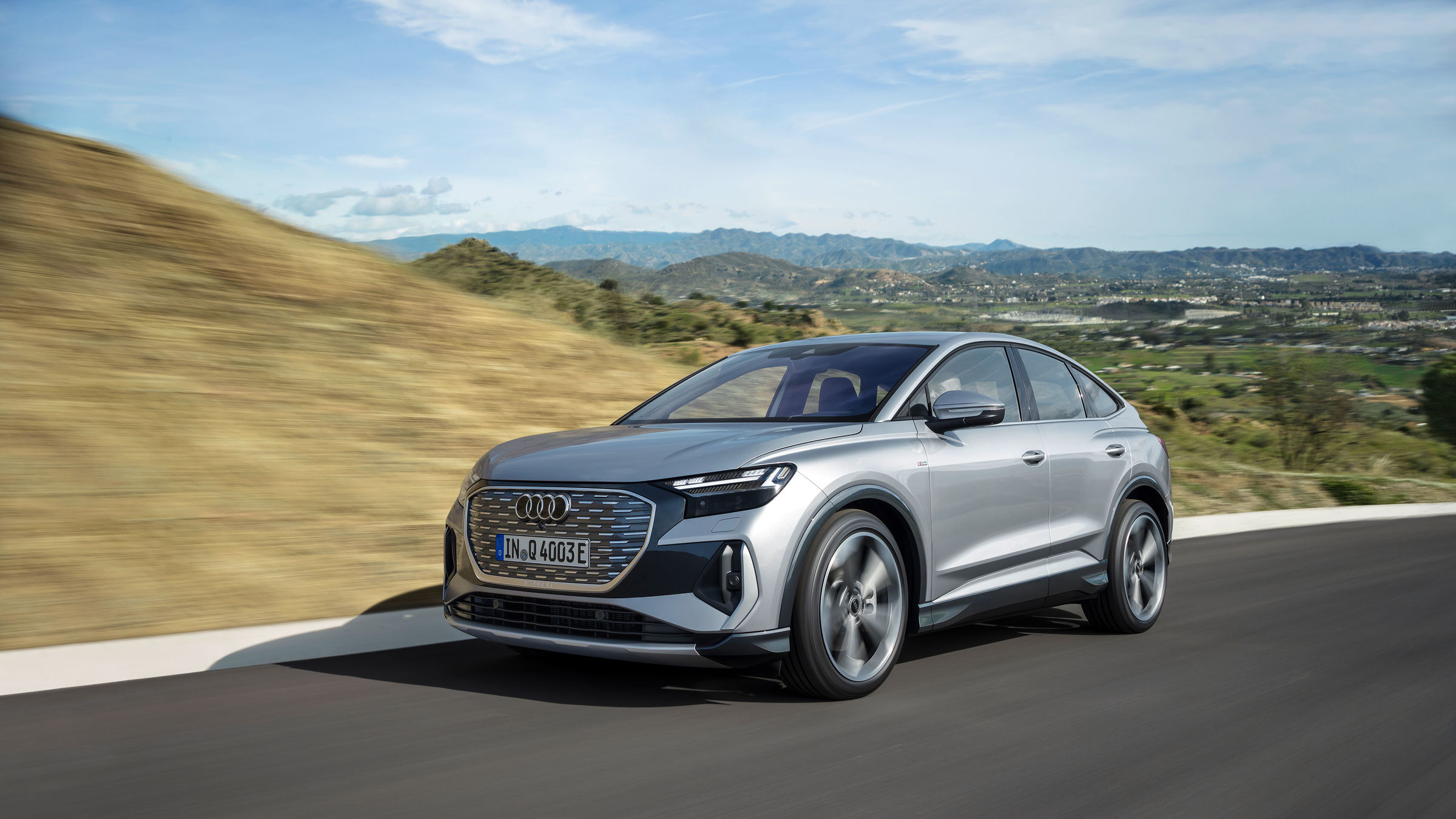 With the Q4 e-tron and the Q4 Sportback e-tron, Audi presents two genuine all-rounders – they are confident companions for sports and leisure and are suitable in every way as a household’s main car. At 4,588 millimeters long, 1,865 millimeters wide, and 1,632 millimeters tall (values for the Q4 e-tron), their external dimensions place them in the larger compact SUV segment.

The architecture of the modular electric drive system (MEB) on which the compact electric SUVs from Audi are based enables a completely new division of space. The technology components need only a little space: The high-voltage battery pack is designed as a flat block underneath the passenger compartment, while the drive unit is located in a compact arrangement on the rear axle – and on the front axle in the quattro models. The short front section houses the radiator, the electric brake booster and major components of the air-conditioning system.

While the front overhang measures just 86 centimeters, the wheelbase measures a generous 2.76 meters – even more than in the medium-sized SUV segment. The resulting interior measures 1.83 meters in length, which is similar to a large full-size class SUV.

Welcome on board: comfortable entry, more than generous space to enjoy

Even climbing on board the Audi Q4 e-tron and the Q4 Sportback e-tron is comfortable: The doors open wide, and the seats are in a comfortably high position. When it’s dark, projection lights in the exterior mirrors cast islands of light with the e-tron logo onto the road outside the front doors (option). The projection picks up on the design idea of the fine horizontal lines in the headlights and taillights.

On board the electric SUV, the driver and up to four passengers enjoy a generously spacious interior, made possible in part by the fact that there is only a flat step instead of a center tunnel. The seat position in the second row is almost seven centimeters higher than at the front, while still offering plenty of headroom – and the knee room is positively luxurious. When it comes to spaciousness, the compact electric SUVs from Audi surpass their direct competitors in the premium segment.

On request, Audi will supply the panorama glass sunroof, which extends over a large area of the roof surface. Its dark tint and a virtually opaque electric blind stop the interior from heating up. Automatic air-conditioning is standard in all Q4 e-tron models; there are options of a version with three-zone control and a heated windscreen. Both features are also available as part of the climate control package – Audi has bundled many options into packages. This is also true for the areas relating to comfort, suspension, functions, infotainment, charging, driver assist systems, and the interior. For the customer, this philosophy simplifies the selection of favorite items of equipment, because it reduces the complexity by half.

A wealth of storage compartments: 24.8 liters of space and ergonomic bottle storage

As genuine all-rounders and family cars, the Audi Q4 e-tron and the Q4 Sportback e-tron come with a generous amount of storage compartments – including the glove compartment, they add up to a volume of 24.8 liters. The center console integrates two cup holders, a 4.4-liter stowage compartment with a cover, two (or four as an option) USB type-C sockets, and, on request, the Audi phone box for the mobile phone. All four door trims feature holders for bottles holding up to one liter that are located far up in the front section of the armrest and are therefore very easy to reach. The upper bottle holders were developed in close cooperation between designers and engineers; finding a spot for them in the limited door space was a real challenge.

The luggage compartment of the Q4 e-tron provides 520 liters of space for luggage. Folding down the backrests, which are divided at a ratio of 40:20:40, creates a virtually level surface; when loaded to the roof, the luggage compartment provides a volume of 1,490 liters. In the Sportback, the rear compartment holds 535 and 1,460 liters – these dimensions also match the level of the next SUV class up. On request, Audi supplies a partition net (for the Q4 e-tron) and the storage and luggage compartment package. It includes a loading floor that can be inserted at two height levels, for example.

The Q4 Sportback e-tron incorporates an electric luggage compartment door as standard, which, in combination with the optional convenience key, responds to foot gestures. With the optional trailer hitch, the compact electric SUVs with rear-wheel drive can pull a weight of 1,000 kilograms, the quattro models can even pull 1,200 kilograms (both braked, at a 12 percent incline).

The compact layout of the front drive unit of the quattro models has allowed the developers to move the longitudinal members of the Q4 e-tron and the Q4 Sportback e-tron quite a long way back in the direction of the center of the vehicle. This has created space for large wheel arches, in which the wheels can turn a long way. In the variants with rear-wheel drive, the turning circle of the Q4 e-tron and the Q4 Sportback e-tron measures just 10.2 meters. With their ground clearance of approximately 18 centimeters, both models also perform well on easy off-road terrain. A trim covers the drive units underneath.

Charging with direct current is another strength that qualifies the Q4 e-tron and Q4 Sportback e-tron as all-rounders fit for everyday use. Depending on battery size they can be charged at HPC (high-power charging) stations at a charging capacity of up to 100 or 125 kW. At 125 kW and under ideal conditions, the battery gets from a state of charge (SOC) of five to 80 percent in 38 minutes. The Q4 40 e-tron can recharge enough electricity – again in ideal conditions – to cover a distance of about 130 kilometers (80.8 mi) (WLTP) in around ten minutes. In the WLTP cycle it achieves a range of up to 520 kilometers (323.1 mi).