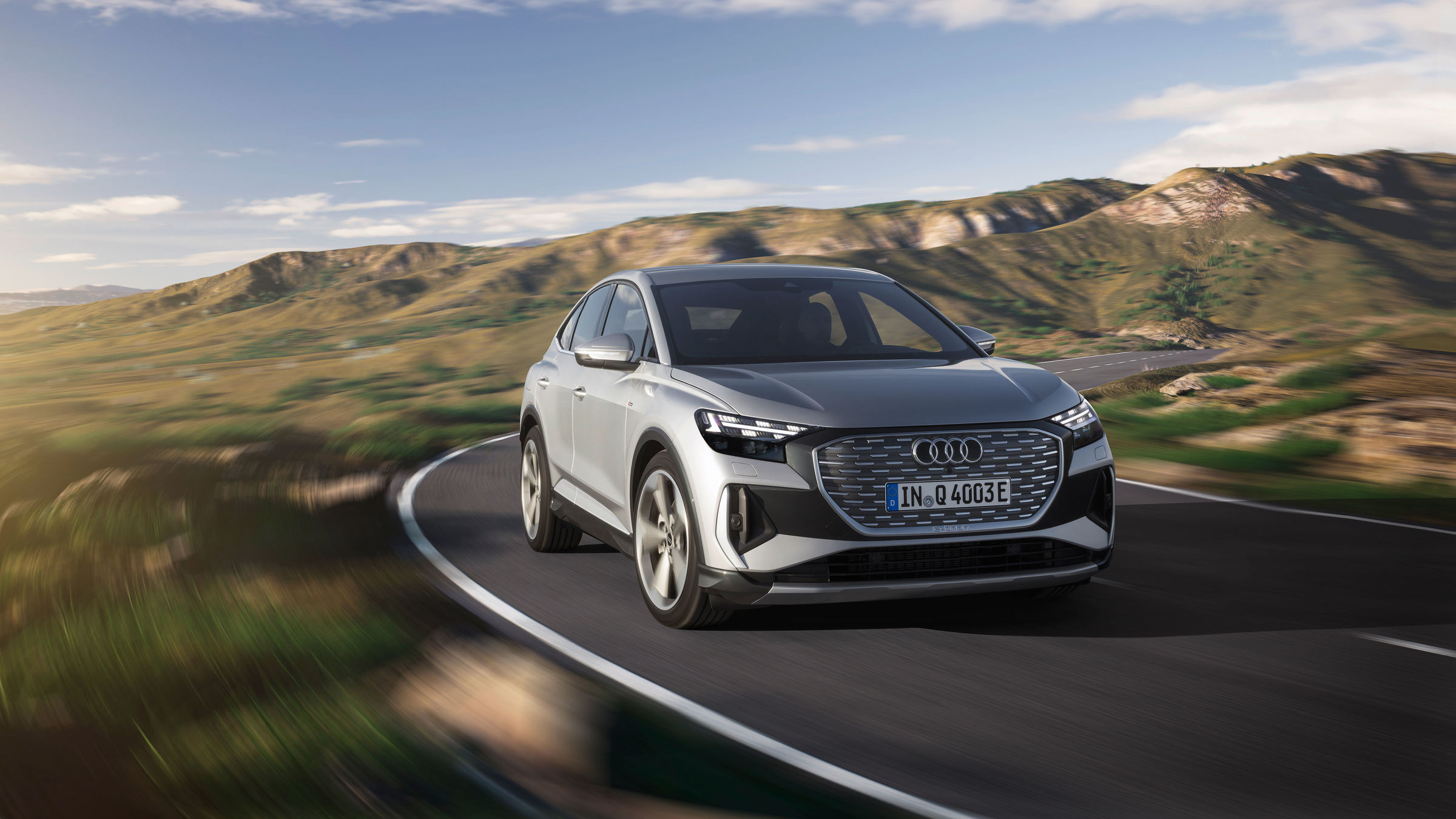 The Audi Q4 e-tron and the Q4 Sportback e-tron include a wide range of drives – from the city cruiser to the powerful quattro. They are being launched on the European markets with two different battery sizes and three motor line-ups. In the Q4 35 e-tron and Q4 40 e-tron a permanently excited synchronous machine (PSM) on the rear wheels provides the drive – these two models, along with the R8 V10 RWD high-performance sports car, are the only series-production Audi models with purely rear-wheel drive. The Q4 50 e-tron quattro as the sporty top model uses two electric motors for its electric all-wheel drive.

The top models Q4 50 e-tron quattro and Q4 Sportback 50 e-tron quattro also run on the 76,6 kWh battery (82 kWh gross). It supplies two electric motors that combine to produce a maximum output of 220 kW (299 PS)* and 460 Nm (339.3 lb-ft) of torque, while making electric all-wheel drive become a reality. The rear motor generates 150 kW (204 PS) and 310 Nm, the front motor 80 kW (109 PS) and 162 Nm. The electric motors keep reserves available for certain driving situations, which is why the sum of their individual outputs exceeds the drive’s total output.

Both model variants sprint from a standing start to highway speed in 6.2 seconds and continue on to reach a top speed of 180 km/h. They have ranges of up to 488 and 497 (Sportback) kilometers respectively in WLTP. The average energy consumption for the Q4 50 e-tron quattro in WLTP is 20.0 to 17.9 kWh. The Sportback, which is available optionally with distinctly sporty tires, consumes 20.9 to 17.6 kWh.

Whether it’s a rear-wheel or all-wheel drive – a permanently excited synchronous motor (PSM) gets to work on the rear axle in all models. It lies parallel to the axle just in front of the wheel center and sends its torque to a one-speed transmission with a differential. Its ratio in the models with rear-wheel drive is 13:1, in the electric all-wheel drive it is 11.5:1.

Including the transmission and the power electronics, which output the current values at intervals of milliseconds, the water-cooled electric motor weighs only around 90 kilograms. It has a maximum speed of 16,000 rpm. Thanks to the soft way in which it works, it also can hardly be heard outside the car – which is why the AVAS (acoustic vehicle alerting system) warning signal that is prescribed by law sounds at low speeds. To start driving, the driver has only to step on the brake and switch to gear D (drive) or B (brake) on the gear selector switch. As soon as they take their foot off the brake pedal, the car starts to roll at low speed.

A major strength of the PSM motor is its efficiency – which is substantially greater than 90 percent in the vast majority of driving situations. During their production, a high-tech solution known as hairpin winding comes into play. The coils of the stator consist of rectangular copper wires that resemble hairpins after they have been bent. This makes it possible to pack the wire more tightly and to add more copper to the stator. As a result, the output and torque increase.

The electric all-wheel drive in the Q4 e-tron top models has an asynchronous motor (ASM) on the front wheels that can rev at up to 14,000 rpm. It is installed coaxially and has combined cooling with coolant and oil. The principal advantages of the ASM are its short-term overload capacity and the minimal drag losses when it is inactive – these are important because the front motor does not contribute to the drive in the majority of driving situations for reasons of efficiency. Its one-speed transmission has a ratio of 10.0:1, and the whole unit comes in at around 60 kilograms on the scales.

In the electric all-wheel drive, the two electric motors work together with maximum efficiency. During moderate driving, the PSM in the rear works the drive on its own for reasons to do with efficiency and traction. When the driver asks for more power than it can offer, the front electric motor is activated – in just a few hundredths of a second. The same happens predictively when driving on slippery roads or cornering at high speed even before the car starts to noticeably understeer or oversteer. The wheel-selective torque control, a software function, rounds off the work of the electric all-wheel drive with finely metered brake interventions at the wheels under a reduced load on the inside of a curve.

The electric all-wheel drive shows off its strengths very clearly at low coefficients of friction, such as on very wet or snow-covered roads or on a loose surface. High stability, sporty handling, and secure grip give the Q4 e-tron quattro a crucial advantage. Following its debut in the Audi e-tron, the electric quattro now makes its way into the compact class.

For maximum efficiency: coast or recuperate?

When the Audi Q4 e-tron is on the move in gear D (drive) and the driver takes their foot off the accelerator pedal, the drive switches to coasting mode. Both electric motors – or the rear motor in the rear-wheel drive models – run freely and largely without energy. Coasting takes priority, because it is the most efficient. If the driver prefers recuperation, however, they have a variety of options for this. In gear B (brake), the drive almost always recuperates when coasting but not when the car is at a standstill. The limit is hit at 0.15 g of deceleration. If “dynamic” mode is set in the optional Audi drive select dynamic handling system (standard in the Sportback), recuperation also takes place in gear D but at a slightly weaker rate than in B.

The optional shift paddles on the steering wheel enable the driver to select three different manual recuperation levels in position D – 0.06 g, 0.10 g, and 0.15 g. The driver can also choose automatic recuperation in the MMI system. When the car enters a zone that enforces a lower speed or when it comes up behind a slower car in front, the drive management system attempts to reduce speed by coasting. If the distance available is too short, it switches to coasting recuperation up to a maximum of 0.10 g. For automatic recuperation to cut in, the predictive efficiency assist system must be activated.

When braking, the PSM at the rear alone performs the deceleration in the majority of everyday driving situations. The quattro models** can brake electrically at up to almost 0.3 g, equivalent to a recuperation performance of up to 145 kW. The electric brake booster only activates the hydraulic wheel brakes as well if greater deceleration is required. The transition is almost unnoticeable, and recuperation remains active almost until the vehicle is at a standstill. The quattro models prioritize recuperation on the rear axle but also use the front electric motor in a few situations.

The power output available in individual driving situations depends on variable factors such as ambient temperature, charging/temperature/conditioning status or physical ageing of the high-voltage battery.
Any deviations from the parameters specified above in particular can lead to reduced power output.
The power output currently available is displayed on the vehicle’s power meter.