A fresh face and our new CI: Exterior design 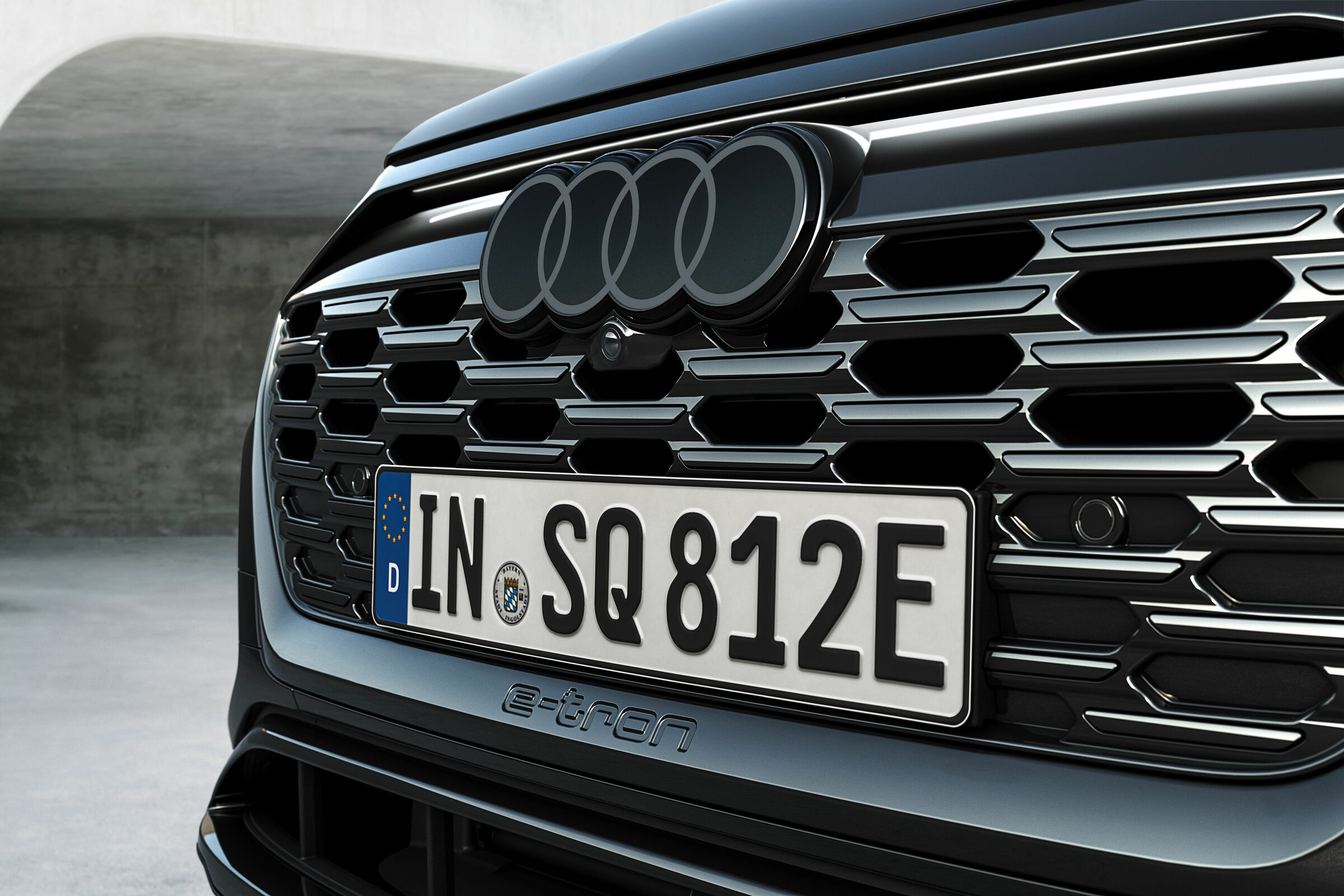 The new Audi Q8 e-tron is a versatile model with two distinct body variants. Even at first glance, the Audi Q8 e-tron and Audi Q8 Sportback e-tron are clearly all-electric models, yet they have their very own character. The new front and rear designs with the expressive Singleframe mask, the inverted grille, and a blade above the redesigned rear diffusers systematically advance Audi's electric design language and emphasize the SUV DNA. Two lines are available: the attractive entry-level Advanced variant and the S line. In addition, the Audi SQ8 e-tron, which underlines its athleticism with high-quality aluminum-look applications and a large diffuser at the rear.

As an important and prestigious Audi e-model, the Q8 e-tron introduces Audi’s new corporate identity in the exterior with a premium-quality, two-dimensional four rings design. The model name with the Audi lettering on the B-pillar is also new.

Inverted grille as a distinguishing feature

As an indicator for an electric-powered SUV from Audi, the Audi Q8 e-tron features the distinguishing three-dimensional Singleframe. The Singleframe is almost completely closed. A mask around the Singleframe visually links the distinctive headlights, creating more width and in the S line, the mask comes in black or Selenite Silver with the Singleframe in Platinum Gray and the radiator grille is in Hekla Gray with black inlays. A special feature of the Edition S line package is the Singleframe, available exclusively in the color of the car. The color-inverted grille structure features a two-dimensional and closed effect as a clear indicator of the all-electric models.

The underride guard also now appears wider, creating a more striking SUV look. At the lower edge of the Matrix LED headlights, four horizontal struts create the specific signature in the daytime running lights, which are integrated directly into the headlights for the first time. Light is used as a core design feature, with dynamic turn signals at the front and rear.

Particularly eye-catching are the optional virtual exterior mirrors. Incorporated into the hexagonal end of their flat supports is a small camera with a resolution of 1280 x 1080 pixels – each support also incorporates an LED indicator and an optional TopView camera. Inside the vehicle, the images from the virtual exterior mirrors appear on OLED displays in the transition between the instrument panel and door.

The most striking element in the side view is the sill area with the battery package riding low between the axles whilst the sill and wheel arch panels, like the rear bumper, come in the color of the car or Manhattan Gray.

In the S line equipment package, a horizontal blade and fins at the sculpted rear emphasize the sporty character of the electric SUV. With their horizontal emphasis and segmented appearance, the taillights echo the graphics of the daytime running lights.

S model as a sporty derivative

The Audi SQ8 e-tron and Audi SQ8 Sportback e-tron reveal their electric power at first glance; the front and rear bumpers are highly contoured and the particularly large and expressive air curtains at the front are reminiscent of a jet nozzle. A vertical bar emphasizes the car’s sportiness and harmonizes visually with the underride guard whilst silver attachments accentuate the front and rear – an exclusive feature for the S models, as are the aluminum-look exterior mirror housings. Widened, flow-optimized wheel arch panels make the S model hug the street tightly, underscored by an aerodynamic diffuser at the rear. Here, the horizontal struts with their lamella structure echo the daytime running light signature as a recurring design element and the horizontal blade at the rear has an aluminum look, as do the elements in the side rocker panels and Singleframe.

Eleven colors on offer at launch

The color range for the Audi Q8 e-tron boasts eleven eye-catching colors, including the five new shades Soneira Red Metallic, solid Magnetic Gray, Madeira Brown Metallic, and Ultra Blue Metallic, exclusively available for the S line variant and the S model. Florett Silver will be available from mid-2023. In the S line equipment package, 20-inch wheels, a full paint finish in the color of the car, and optional red brake calipers enhance the appearance even further. Five new wheel designs are available for the Q8 e-tron and the S model boasts a unique wheel range, with the rim size starting at 22 inches (in all other variants, the rim size ranges from 19 to 22 inches).

Progressive and sporty with the Edition S line

The Edition S line boasts sporty highlights, both inside and out. It underscores the progressive appearance of the all-electric Audi Q8 e-tron models and builds on the S line exterior, which already features striking accents at the front, sides, and rear.

When the driver’s door is opened, LED lights project the words “e-tron edition” onto the street. In the interior, the upper section of the instrument panel is upholstered in artificial leather with a carbon application beneath that. Color highlights include contrast stitching in red on the three-spoke sport leather steering wheel, the seat belts, and on the super sports seats and center armrest, among other places.

The Audi Q8 e-tron is the first model to carry the newly designed Audi rings in a two-dimensional look. “As a prestigious model, the Q8 e-tron represents Audi’s ‘e-volution’, so it is only logical for this vehicle to be the first to use the new four rings design,” says designer André Georgi. Although the size remains the same, the new rings have a more precise appearance that is also made premium-quality, modern, and elegant through the thinner lines. The rings are entirely chrome-free with highly contrasting black and white for even greater radiance. Optically brightening the logo lends the rings a flat, premium-quality look, which still appears three-dimensional in detail.

The new rings harmonize with all finishes across Audi’s color range. On request, customers can continue to opt for a black edition, where the white is replaced by a dark gray that looks like high-gloss black. In addition to the four rings, the model and technology identifiers on the vehicle have also been reimagined. In all upcoming models starting with the Q8 e-tron, the model name, derivatives, and drive technologies, in addition to the Audi lettering, will be engraved on the B-pillar trim tone-on-tone using a special process. The engraving appears as though behind a pane of glass. In addition, no output indicator is visible on the vehicle, giving the appearance a very clean look.

To underscore the new family logo even more on the front and to highlight the four rings as a central element, going forward Audi will use indirect lighting in the radiator grille to showcase the vehicle face on request. The Singleframe projection light uses a light strip to create a visually consistent connection between the headlights.