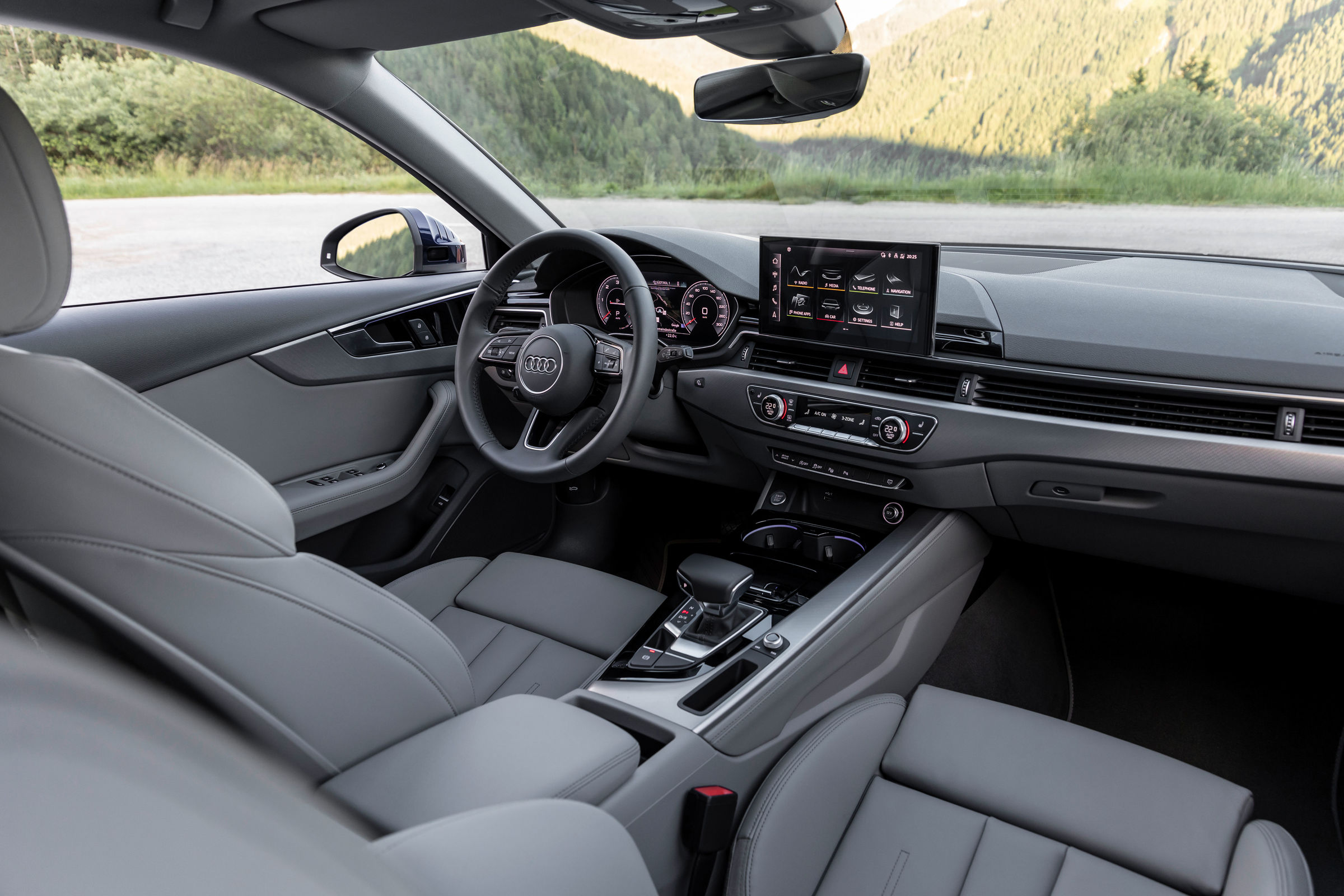 “The powerful presence of the latest A4 models represents the new Audi design language that we presented for the first time two years ago with Audi’s flagship, the A8,” said Audi’s Head of Design Marc Lichte. “With its sporty upgrade, the A4 gains in dynamism and sophistication from the ground up.”

Sportier and tauter: the exterior design

Almost every sheet metal part on the outer skin of the Audi A4 has been altered. The front appears sporty and wide. This is primarily due to the redesigned flatter, broader Singleframe grille with its sculpted cross bars. Underneath the headlights – which are also new and no longer have jagged bottom edges – sit large pentagonal air inlets that narrow inwardly to a sharp point. They are bordered at the top by a striking contour with the result that they appear to be separate geometric bodies.

The flow of the side view follows the larger models with the four rings. The shoulder line starts at the corner of the headlight and initially runs together with the edge of the hood. It fades out at the level of the exterior mirrors. It begins again in the area of the rear door handle in order to draw towards the rear lights. Above the wheels, the shoulder line forms accentuated edges that point towards Audi’s quattro technology. Their undercuts create an intense interaction between light and shadow.

A second line runs across the highly sculpted doors, lower than the shoulder line, that pulls the visual center of gravity of the Audi A4 downwards. The edges of the side sills take the shape of dynamic blades. The low roof line begins to fall away again at an early stage. With the Avant, which is fitted with roof rails as standard, the roof line tapers off into the flat D-pillars. The roof edge spoiler rests on triangular aero bezels at the side. With the Sedan, the broadened rear side window makes the cabin seem longer and the pillar more slender. The exterior mirrors are seated on the door rails like in a sports car.

At the rear, which also has a markedly three-dimensional design, a continuous chrome strip connects the lights. This emphasizes the impression of width. Two trapezoidal tailpipe trims that are embedded in the diffuser insert form the end of the exhaust system.

The Audi A4 and the A4 Avant boast excellent drag coefficients of 0.25 and 0.27. In the aerodynamics concept, the extensively paneled underbody and the aerodynamically designed front and rear ends play important roles. Openings on the outside of the side decorative grilles direct the airflow into the wheel arches, where it is efficiently guided past the wheels.

The equipment line concept is also new. For the exterior, they are now called basic, advanced and S line. They can be freely combined with the interior lines basic, design selection and S line. For the basic line, the attachments are kept in the body color or grained; the Singleframe grille is painted matt black. With the elegant advanced exterior, the Singleframe, the air inlets and the diffuser provide accents in the graduated tones aluminum silver and dark chrome. Depending on the engine variant, the A4 models come with 16- or 17-inch wheels as standard. Upon request, Audi will supplement the advanced exterior with the black styling package and door handles with chrome strips.

The same packages are also available for the sporty S line exterior. Here, the air inlets at the front are drawn further up and contoured more strongly towards the bottom, are filled with honeycomb grilles and are divided by silver trims in the outer area. The Singleframe is kept in chrome, and the honeycomb structure of the radiator protective grille is in gloss dark chrome. The flat slit below the hood is reminiscent of the legendary original Audi quattro. S line badges place an emphasis on the fenders.


The diffuser is enlarged and also has a honeycomb grille insert. It is in matt dark chrome and a silver trim surrounds both it and the tailpipe trims. The 18-inch wheels and the sport suspension that lowers the body by 23 millimeters (0.9 in) further sharpen the car’s look and handling.

The paint range for the Audi A4 and A4 Avant comprises twelve colors. The solid paints are brilliant black and ibis white, while the metallic and pearlescent paint finishes are Daytona gray (for the S line exterior only), floret silver, glacier white, Manhattan gray, mythos black, quantum gray (for S line, S model and allroad quattro only), Navarra blue, tango red, terra gray (new) and turbo blue (for the S line exterior only).

As the top-of-the-line system, the matrix LED headlights also provide dynamic indicators and cornering lights as well as an animation. Their fully automatic high beam is radiated by eleven LEDs in each headlight, which sit behind a lens and, just like the adjacent low beam module, have the appearance of an eye. The control unit can switch them on and off or dim them as necessary so that the matrix LED headlights always illuminate the road brightly without blinding other road users. When the car is locked and unlocked, dynamic light animations play in the headlights and rear lights.

The rear lights of the Audi A4 are available in three versions. They, too, are all equipped with LEDs as standard. With the first option, the customer receives the LED rear lights with a specific signature based on the motif of the daytime running lights, and dynamic indicators. In the highest configuration level, the tail light comes with the coming home / leaving home animations just like the headlights.

The interior of the Audi A4 models feels large and generous and combines lightness and high-tech features. On the wide, asymmetrical center console, a storage compartment occupies the position of the previous MMI control terminal, with the rotary control for the volume to its right. The upper edges of the instrument panel and door trims surround the interior as a wrap‑around, without leaving the driver and passengers feeling confined.

The interior design is focused on horizontal lines as well as the wide band of air vents and the large decorative surface on the instrument panel. At its center is the standard MMI touch display, the heart of the new operating system centered within the space. With a depth of only 13 millimeters (0.5 in), the display is extremely slender.

The front seats in the Audi A4 are anatomically shaped. Sport seats and S sport seats with integrated head restraints, S embossing and a rhombus pattern are available as alternatives to the standard seats. Seat heating is available for all variants. Power adjustment, massage that is performed by three pneumatic cushions and ventilation in the sport seats provide even greater comfort. All steering wheels have a three-spoke design and are equipped with multifunction buttons. Heated and flat-bottomed steering wheel rims and shift paddles for automatic transmission round off the program.

As a Sedan, the Audi A4 offers 460 liters (16.2 cu ft) of luggage capacity. In the Avant, it is at least 495 liters (17.5 cu ft) – 1,495 liters (52.8 cu ft) with the rear seats folded down. The loading sill of the A4 Avant is only 63 centimeters (24.8 in) high, while a stainless steel cover protects it from scratches. Upon request, the luggage compartment can be electrically powered. Gesture control is another option available for both the Sedan and the Avant.

With the A4 Avant, a partition net and roof rails come as standard along with the electric luggage compartment cover that is guided up to the D‑pillars on rails. A folding luggage compartment mat for variable division of the luggage compartment, the storage and luggage compartment package with nets and tensioning straps and a rail system with load-securing kit are all available as options. The trailer hitch, which is also optional, is electrically released at the press of a button.

The range of colors and trims separated into the basic, design selection and S line interior package lines have new colors and combinations to offer. With the basic option and the design selection, the instrument panel can be divided into two color zones. You can choose from the tones black and granite gray for the dark, upper area and from atlas beige, rock gray and black for the lighter, lower section. The same colors are also available for the seat upholstery, along with okapi brown, cedar brown and manganese gray.

The S line sport package is dominated by black and gray tones. The sport seats are trimmed with a combination of leather and fabric as standard and feature S embossing, while the pedals and footrest are made from stainless steel. The inlays made from matt brushed aluminum stand in delightful contrast with the elements from the high-gloss package. Contrasting stitching adorns the upholstery, the steering wheel, the center armrest, the armrests in the doors and the floor mats. The illuminated door sill trims bear S logos.

The design selection also awaits with contrasting stitching on the center console and the armrests (both trimmed with artificial leather) as well as on the steering wheel. The door sill trims are illuminated here, too, while edging borders the floor mats. The inlays are in aluminum ellipse gray, the seat upholstery in twin leather (artificial leather with pearl Nappa leather) with contrast stitching. With the highest option level, the customer receives fine Nappa leather.

Many of the optional coverings are refined with contrasting stitching, some are also piping. In the design selection, Audi is offering woven piping in silver in combination with twin leather seats for the first time as well as piping in fine Nappa on the seat of the same name.

When it comes to interior lighting, customers can choose between two alternatives to the standard lighting. The first of these is the ambient lighting package with its white LEDs. The contour/ambient lighting package has an even more pleasant effect. It can be set to one of several profiles and any of 30 colors in different zones. These vary depending on the mode set in the Audi drive select dynamic handling system. In the door trims and in the knee pad, narrow light guides generate dramatic contour lighting.

All materials in the interior have been selected and crafted with particular care. Chrome strips fitted with zero play border the upper edge of the air vents, the control panel for the automatic air conditioning and the automatic selector lever on the center tunnel console. The optional high gloss black fittings that already come as standard in the S line are new to the Audi A4. The recesses for the door handles are directly in the trim strips, while all joints are extremely slender and run in parallel.