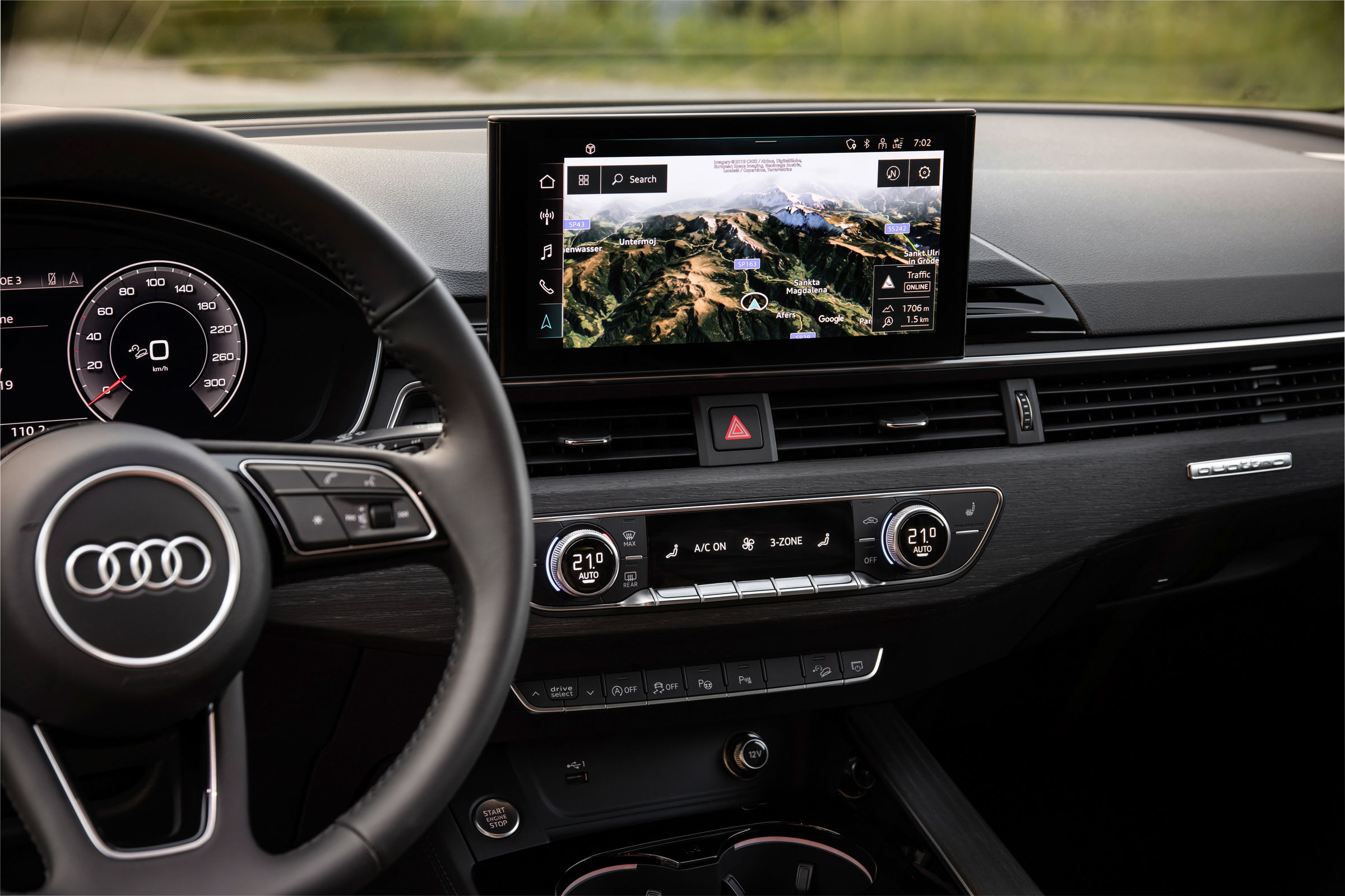 Even more communication, even greater safety and comfort – the Audi A4 is a highly connected car. The fully digital MMI operating system offers a user experience similar to a contemporary smartphone and systematically advances the digitalization of the cockpit. The offering in terms of connectivity and driver assistance systems is state-of-the-art.

Two years ago, Audi presented its new fully digital operating concept in its flagship, the A8. Now it is being introduced to the Audi A4. The MMI touch technology is transporting Audi’s quality standard into the digital age. A large TFT display with acoustic feedback replaces the rotary/pushbutton control on the center tunnel console. It is mounted in the center of the instrument panel and tilted slightly towards the driver. The display is used for controlling the infotainment and some comfort functions as well as for text input by means of handwriting recognition or a virtual keyboard.

The MMI touch display has a 10.1-inch diagonal and a resolution of 1,540 x 720 pixels. Clever detail solutions make operation easy and intuitive. Many features and symbols are configured with long-touch functions, while swiping, scrolling and multifinger gestures are also supported. In addition to complete words, text input also registers letters that are written on top of each other.

The graphic design of the MMI touch display has a deliberately clean, reduced appearance so that information can be understood particularly quickly. The menu structure is lean and intelligent. The MMI search is based on free text input and returns results rapidly. If the driver is looking for a restaurant, for example, a list of hits will appear after just a few letters have been typed.

Instead of using their finger, the driver can also operate the MMI using their voice as natural-language voice control, which understands many of the phrases used in everyday speech. This makes the car an intelligent travel companion. With the optional MMI navigation plus, the voice control uses knowledge from the cloud in addition to the data stored on-board. The user can freely formulate a large number of commands or questions. The system asks questions, if necessary, allows corrections and additions and offers selection options. The user can switch between different menu areas within a dialog. For example, the user can call a contact from the phone book and then use the associated address as a navigation destination.

Three instrument cluster variants are available: two partially analog driver information systems and – in conjunction with the MMI plus – the all-digital Audi virtual cockpit plus. It has the same graphical interface as the large touchscreen and offers a full HD resolution of 1,920 x 720 pixels on the screen with its 12.3-inch diagonal. The driver can switch between three screens – the classic view, the sport mode and the dynamic mode.

The A4 adapts to the personal requirements of its drivers completely. Personalization allows preferred settings to be stored in up to 14 myAudi user profiles and a guest profile. In doing so, it factors in up to 400 parameters ranging from climate control to frequently selected navigation destinations and favorite media. The car recognizes the particular user from their key when the car is unlocked and activates the associated individual profile automatically. But at the same time, it asks via a prompt on the display after unlocking whether this profile should be retained or a different, individually stored profile should be selected. Thus, one and the same key can be used with different personal profiles.

Another option is the Audi connect key. It lets the driver lock/unlock the vehicle and start the engine using an Android smartphone using near field communication (NFC). Via the myAudi app, the owner of the A4 can pass five digital vehicle keys on to colleagues, friends or family members. An NFC-enabled card supplements the Audi connect key – a practical and secure solution for valet parking, for example.

A head-up display, which projects important information onto the windshield, rounds off the operating concept. Its visual window is in the driver’s direct field of vision, with the image appearing 2.1 meters (6.9 ft) away. The eyes, accustomed to a long-range view, do not have to refocus to read the information. The detailed intersection map for navigation is new here.

The optional navigation system in the Audi A4 is now even more versatile and user-friendly. The map uses a new texture and includes detailed 3D models of many large cities. When planning the route, the self-learning navigation system makes suggestions to the driver based on routes driven previously, incorporating experience regarding time of day and traffic density.

The route is calculated online on servers in the back-end, using real-time data for the overall traffic situation. If the data connection is lost while on the move, the navigation system switches to on-board route guidance, which runs along in the background. Audi offers a free update to the navigation database four times a year.

The MMI plus also comes with the Audi connect and Audi connect plus services, which are likewise free of charge for the first three years. These include the online radio and the hybrid radio, which automatically switches between FM, DAB+ and online stations. Thanks to Audi connect, the A4 also uses the swarm intelligence of the Audi fleet, with the Car-to-X services online traffic sign and hazard information, for example. The on-street parking service makes it easier to find a parking space on public roads. Traffic light information is a new feature that Audi is offering in selected cities in Germany for the first time: The car receives information from the traffic light central computer via a server so that the driver can choose their speed to match the next green light. The instrument cluster displays a personal speed recommendation as well as the remaining time to the next green light whenever the driver is waiting at a red traffic light. As a result, the system promotes an anticipatory driving style and aids the flow of traffic.

The services of Audi connect emergency call and service, which are already included as standard, form a separate package. They comprise the emergency call, online roadside assistance and Audi service request functions. This package also features the convenient remote services – these allow control certain functions to be controlled via the myAudi app using a smartphone.

The customer can use the app to access the brand’s digital ecosystem and services such as myAudi navigation, which switches seamlessly from the smartphone to the car. The app also supports music streaming and transfers the smartphone calendar to the MMI.

With the Audi A4, it is not only the software that is diverse and attractive but also the range of hardware. The Audi music interface with USB and Bluetooth connection is part of the standard MMI radio. The optional Audi smartphone interface brings Android Auto, Apple Car Play and thus the familiar smartphone environment into the vehicle.

The Audi phone box connects the smartphone to the vehicle’s antenna and can charge it inductively. Voice-over-LTE helps to connect faster and makes it possible to use high-speed data transfer and high-resolution online voice telephony (HD Voice) at the same time. Further options are a digital tuner for the radio and two USB C ports in the rear that can also be used to charge external devices.

There are two sound systems to choose from with the Audi A4: the Audi sound system and the Bang & Olufsen 3D Premium Sound System in the front. Of the top system’s 19 loudspeakers, two are in the A-pillars and in the front doors respectively – they reproduce the spatial dimension of height. The 16-channel amplifier has an output of 705 watts.

The pioneering functions on demand are part of the many innovations set to accompany the market launch of the Audi A4. They allow customers to add on three infotainment functions flexibly as required via the myAudi app, even after purchasing the vehicle. In Germany, these are the MMI navigation plus operating system, the DAB+ digital radio and the Audi smartphone interface.

In terms of vehicle configuration, everything will stay the same for customers. However, for the first time, customers can now also book functions that were not selected during the initial configuration on demand after the vehicle has been delivered to them. There is a choice of various terms. If customers would like to get to know a function first before committing themselves, they can book a one-time, one-month test phase. Customers can extend the booking even during this phase, either for a further month, a year, or permanently. If they decide not to extend the term, the booking expires automatically and without requiring active termination at the end of the term.

Functions are always booked for the particular car, just like during the initial vehicle configuration. When the car is sold, they therefore remain active for the remaining term and can be used by the next owner. The rates for functions on demand are based on the classic price list and are specified for each market. The functions are booked and paid for via the myAudi app or the myAudi Portal.

Safety, comfort and confidence – Audi is offering numerous driver assistance systems in the A4 and A4 Avant. Some of them, including Audi pre sense city and multicollision brake assist, are part of the standard equipment. The optional systems are subdivided into the “Tour,” “City” and “Park” packages.

An important system in the assist package “Tour” is the adaptive cruise control including stop & go function – it maintains the distance from the car in front and regulates the vehicle’s speed in line with speed limits as well as for intersections, traffic circles and curves. At speeds of up to 65 km/h (40.4 mph), the integrated traffic jam assist also helps the driver with steering. Audi active lane assist, which uses camera data to guide the car in the lane at speeds greater than 65 km/h (40.4 mph), is its ideal complement. If the driver wishes, predictive efficiency assist can help to promote an economical driving style. It evaluates Car-to-X messages, sensor information, navigation data and traffic signs and helps the driver to slow the car down and accelerate in an anticipatory fashion. As part of this, it outputs instructions on the display when the driver should accelerate, for example. Other modules in the Tour package include turn assist, collision avoidance assist, high-beam assist, camera-based traffic sign recognition and the Audi pre sense front safety system.

In the assist package City, the focus is on detecting close objects around the vehicle. The Audi side assist lane change warning, rear cross traffic assist and the exit warning in the “City” package, for example, depend on the signals from the mid-range radar at the rear. The parking system plus and the reversing camera complete this package. The assist package Park includes the 360 degree cameras and park assist, which automatically steers the car into parallel and perpendicular parking spaces with support from the driver. It can also steer the vehicle out of parallel parking spaces once more.

All terms marked in the text are explained in detail in the technology lexicon at MMI search.