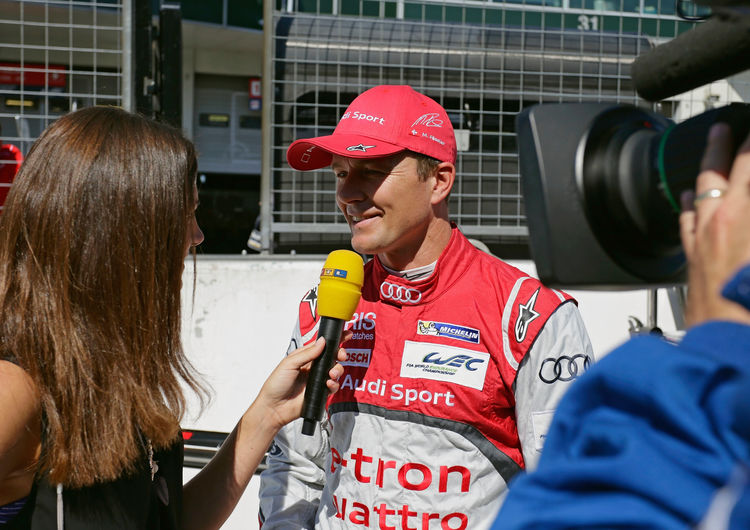 Marcel Fässler (CH), André Lotterer (D) and Benoît Tréluyer (F) have maintained the lead of the standings for Audi with 17 points halfway through the FIA World Endurance Championship (WEC) season. Quotes following the German premiere of the racing series at the Nürburgring.

Dr. Wolfgang Ullrich (Head of Audi Motorsport): “In round four of the season, we weren’t as competitive as we’d been hoping to be. We tried everything on the Nürburgring and were battling but didn’t cope as well as we were hoping with the temperatures on Sunday. Now, we need to prepare accordingly for the remaining four races. We still have quite a bit of work to do before the end of the season.”

Chris Reinke (Head of LMP bei Audi Sport): “The FIA WEC has delivered an outstanding first round in Germany. It was very special for us to race at home, on the Nürburgring, in front of such an impressive crowd. Unfortunately, we have to admit that Porsche were simply better today. Accordingly, we congratulate the deserving winners.”

Ralf Jüttner (Team Director Audi Sport Team Joest): “Congratulations toPorsche. The race was difficult for us because we simply weren’t as fast as our strongest rivals. In the second half of the race, our car was pretty good, but Porsche were consistently fast across the whole distance. We showed a relatively flawless race but, on the whole, our performances weren’t good enough.”

Marcel Fässler (Audi R18 e-tron quattro #7): “I’m really impressed by the sports car audience in Germany. However, in terms of racing it wasn’t an easy day for us. We tried everything – tactically as well as in the cockpit.  But it wasn’t enough to really be in contention for victory with Porsche. Although we’ve still got some work to do before Austin, I’m looking forward to the race in Texas.”

André Lotterer (Audi R18 e-tron quattro #7): “Racing at the Nürburgring was a lot of fun. The event was really tremendous. A large number of spectators attended the event and I hope that we did a good job of entertaining them. The weather was good too. The Nürburgring simply belongs on the WEC calendar. In the race, we achieved our maximum in third place. We simply weren’t fast enough.”

Benoît Tréluyer (Audi R18 e-tron quattro #7): “It wasn’t an easy race. The set-up of our car wasn’t optimal. André was very fast towards the race’s midpoint, but when I took over the lap times weren’t so good anymore. At first, I thought it was my fault but when André took over again the same problem continued. Now we need to analyze what caused it. With good team spirit, we scored important points in the battle for the title.”

Lucas di Grassi (Audi R18 e-tron quattro #8): “I was relatively happy with the balance of our car. We finally managed a solid race again in car number 8. I enjoyed the race at the Nürburgring because we had some very nice duels. We extracted the maximum from our R18 e-tron quattro, but Porsche were better. So, we have to clearly improve.”

Loïc Duval (Audi R18 e-tron quattro #8): “We generally had a good race. If everything had gone optimally, we could have achieved second place. Unfortunately, we lost some time under yellow flags. Lucas put in a strong performance and managed some good overtaking maneuvers. In third place, our team-mates scored valuable points in the battle for the title. Like the previous rounds at Silverstone, Spa and Le Mans, the race was definitely a thriller. The entertainment for the crowd was tremendous. The FIA WEC is fantastic this year. It’s fun to be part of it.”

Oliver Jarvis (Audi R18 e-tron quattro #8): “Unfortunately, it wasn’t enough for a podium today. That we had a race without major setbacks is a positive. Porsche obviously managed to make a bigger step than we did – congratulations to them on their victory. We know that we still have a lot of work to do before the end of the season.”