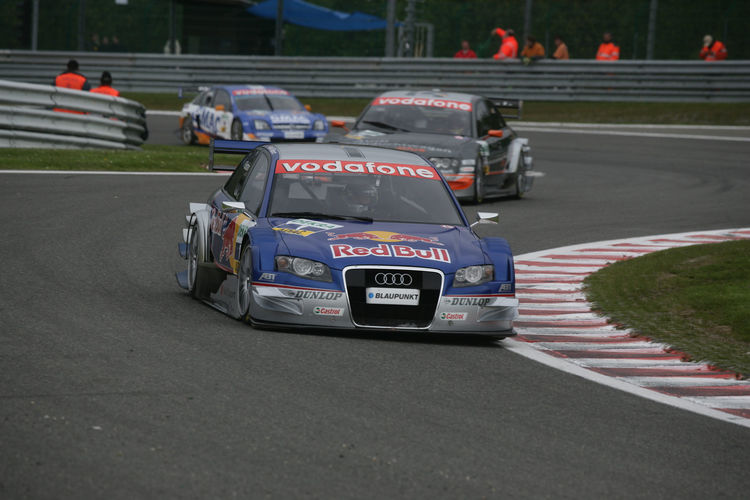 On the circuit that is both the fastest and one of the most demanding on the 2005 DTM calendar, Audi has achieved its best result of the season so far, making up ground in the overall standings. With a second-place finish, title defender Mattias Ekström is now ranking two points behind the leader, Gary Paffett, who only grabbed one point at Spa. With Tom Kristensen finishing in third place, two Audi drivers were on the podium for the first time this season. Martin Tomczyk, who finished sixth despite having started from position 14 on the grid, completed the strong performance of the Audi squad.

Through the first half of the race, the new Audi A4 DTM’s first victory of the season seemed to be within reach: following a perfect start, Mattias Ekström moved up to lead the field, returning from the first lap with a two-second advantage to defend his lead all the way through to the 10th of 24 laps. A problem during his first pit stop, however, caused Ekström to drop behind the ultimate winner, Mika Häkkinen. Thereafter, the current DTM Champion drove a tactical race, securing eight valuable points.

Struck by bad luck was Allan McNish: practically sure to be scoring his first DTM points, the former Formula 1 driver had to park his Audi A4 DTM three laps before the finish because of a left rear tyre puncture. Defeated below their true potential, as well, were the drivers of last year’s Audi A4 DTM cars: Christian Abt, who had started from position three on the grid, forfeited his chance of a fifth-place finish when he crossed the white line at the pit lane exit which earned him a drive-through penalty. Pierre Kaffer, who had been fifth in the Qualifying, was hit by a rival in the early stages of the race, causing him to drop to the back of the field to ultimately finish in 14th place. Frank Stippler and Rinaldo Capello worked their way up from starting positions 20 and 18 to 11th and 13th.

Mattias Ekström (Audi Sport Team Abt Sportsline #1)
2nd place, + 4.258s
“If you want to win in the DTM, everything’s got to be exactly right. I could have probably fought for victory with Mika today, but unfortunately the first pit stop wasn’t perfect. I can’t even remember the last time this happened with our team. When I was behind Mika, I stopped attacking hard because my rear tyres had started blistering after my first pit stop. After all, there are no additional points awarded for how close you finish.”

Tom Kristensen (Audi Sport Team Abt #5)
3rd place, + 5.976s
“I’m happy to be a member of the Scandinavian DTM club on the podium, although I only started from the third row. Clinching a podium position at Spa is something very special. My A4 was perfect, the team was perfect, my pit stops were perfect as well – and I had a great duel with Marcel Fässler that I was able to win. We touched each other slightly, but that’s something we’re going to discuss tonight over a beer.”

Martin Tomczyk (Audi Sport Team Abt Sportsline #2)
6th place, + 28.001s
“I had a good start, but after Eau Rouge I was nearly pushed onto the grass. I had to brake, which cost me three places. That was very annoying. I had just about given up hope for a good result but our pit stop strategy worked out perfectly. My car was very quick. Towards the end, I even got caught behind Marcel Fässler. Unfortunately, I didn’t see how many laps were remaining at that point and was quite surprised that the race was over already. Nevertheless, I can be very satisfied, having moved up from 14th to sixth place.”

Christian Abt (Audi Sport Team Joest Racing #14)
10th place, + 50.856s
“At the beginning of the race it was very difficult because our cars from last year are lacking too much top speed on such a fast track. It is almost impossible to keep the others behind you on such a long uphill straight. Still, we could have achieved fifth or sixth place. But – if you cross the white line at the pit lane exit, you get penalised. You have to accept that even though it’s difficult.”

Frank Stippler (Audi Sport Team Joest #19)
11th place, + 51.402s
“The race was good fun, but the result wasn’t the very best. Our speed was okay, I was able to catch up with several of the other guys and make up places. I could have done even better, but – unfortunately – had a bit of bad luck during the first pit stop and – later – made a small mistake. Altogether, this wasn’t exactly my weekend.”

Rinaldo Capello (Audi Sport Team Joest #18)
13th place, + 55.961s
“In the starting phase, someone crashed into my rear pretty hard. Then – at the end of the first lap – another guy hit my left door. Afterwards, the car was understeering heavily and much slower on the straights than usual.”

Pierre Kaffer (Audi Sport Team Joest Racing #15)
14th place, + 56.711s
“It’s a shame we weren’t able to put our good practice result on the track today. The car was consistently quick over the whole distance. Unfortunately, there was a small collision. I turned in and got turned around. I don’t know if he was alongside me, in any event, I didn’t see him. After that, I was the last in the field, and from that position there was no chance of scoring a better result than this.”

Allan McNish (Audi Sport Team Abt #6)
18th place, - 3 laps
“The result was disappointing. I lost the sixth place I could have achieved due to tyre failure. The tyre blew at the end of the straight and that was the end of my race. Before that, I had been doing quite well although my left door was not completely closed. The car was understeering primarily in the right-handers, that’s why Eau Rouge was probably a bit too much of a thrill.”

Hans-Jürgen Abt (Team Director Audi Sport Team Abt Sportsline): “Second, third and sixth place – that was a fantastic team performance. Of course we would have liked to win here, but during the first pit stop Mattias lost two seconds. Whether that was the crucial factor at the end of the day we do not know. The fact is that during the tyre change the right rear nut fell to the ground. All the other stops were perfect as usual. Now, we’re going to go into the next race with even greater motivation. With regard to the Championship, it wasn’t all that bad to be second here. Especially at Brno and Oschersleben the additional weight will be very important.”

Ralf Jüttner (Technical Director Audi Sport Team Joest): “At Spa, we were better in the Qualifying than in the race. Next time, we’ll do it the other way around because you get more points that way. If you start from positions three and five on the grid and then finish without points, that’s a bit disappointing. Without the drive-through penalty, Christian would have finished the race in fifth or sixth place. Pierre was turned around by the leader of the standings, who received a drive-through penalty for this as well. Of course, this didn’t help Pierre in any way, but we’ve got to live with this. Frank and ‘Dindo’ Capello started very far back on the grid and both drove a very good race.”

Dr Wolfgang Ullrich (Head of Audi Motorsport): “We saw a very good team performance here today and improved our position in the standings. Mattias had an excellent start and was able to maintain his position in front of Mika with his first set of tyres. Unfortunately, something happened then which is a very rare occurrence with Audi Sport Team Abt Sportsline: the pit stop was not perfect, which caused Mattias to fall behind Mika. Because this track is very hard on the rear tyre, Mattias decided to restrain himself somewhat and not to take any unnecessary risk. In his situation, that was the right decision and it shows his strength. Tom and Martin, as well, drove fantastic races. Allan and the cars from last year were struck by a bit of bad luck today – particularly Christian, who managed to make it into the top ten despite his mishap.”