Skip to content
We are using cookies for a better user experience.
03/30/19
Laguna Seca/Neuburg a. d. Donau
Sport 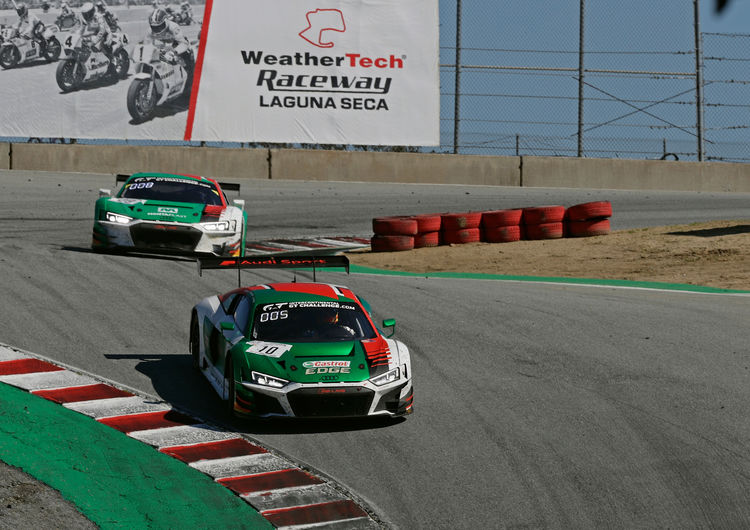 Following two consecutive victories in the California 8 Hours, Audi Sport customer racing achieved a fourth and a seventh position at Laguna Seca, USA, marking a successful debut of the 2019 generation of the Audi R8 LMS GT3 sports car in this series.

With entries by eight automotive manufacturers, the third season of the Intercontinental GT Challenge (IGTC) is more competitive than ever before. In the second of five rounds in the world’s most prestigious GT3 racing series, the #10 Audi R8 LMS from Audi Sport Team WRT with the driver trio Christopher Haase (D), Dries Vanthoor (B) and Frédéric Vervisch (B) finished in fourth position. The gap between them and the winners after eight hours was merely 58 seconds, and a podium finish just barely missed.

The #29 sister car from Audi Sport Team Land with the driver squad Kelvin van der Linde (ZA), Christopher Mies (D) and Markus Winkelhock (D) had a one-lap deficit in seventh position. Markus Winkelhock saw the end of the race in the team truck this time. The German, who was suffering from the flu, was directed by the track physician to end his stint halfway through the race. The stewards of the meeting allowed his two teammates to take over Winkelhock’s driving time.

The high-caliber field fought close battles across the entire race distance – six of the eight marques finished in the top ten. Remarkably for an endurance race there was not a single yellow period during the eight hours.

“Today we received confirmation of what a fiercely fought racing series the Intercontinental GT Challenge has become,” said Chris Reinke, Head of Audi Sport customer racing. “Across the full race distance the entire field fought close battles. That leaves no room for mistakes. Unfortunately, after two victories in 2017 and 2018 here at Laguna Seca, we’re going home without a trophy this time. Small things made the difference today. I’d like to thank our six drivers and the two teams. They all did a good job. Now, we’re looking ahead and forward to the two upcoming 24-hour races at the Nürburgring and at Spa.”

The Intercontinental GT Challenge will continue at the end of July with round three, the tradition-steeped 24 Hours of Spa-Francorchamps. The race in Belgium will be followed by rounds in Japan (Suzuka) and Kyalami (South Africa). In the IGTC, Audi is the title defender in the manufacturers’ classification and, with five of six possible titles after three years, the most successful brand.