Season starts for Audi at Daytona 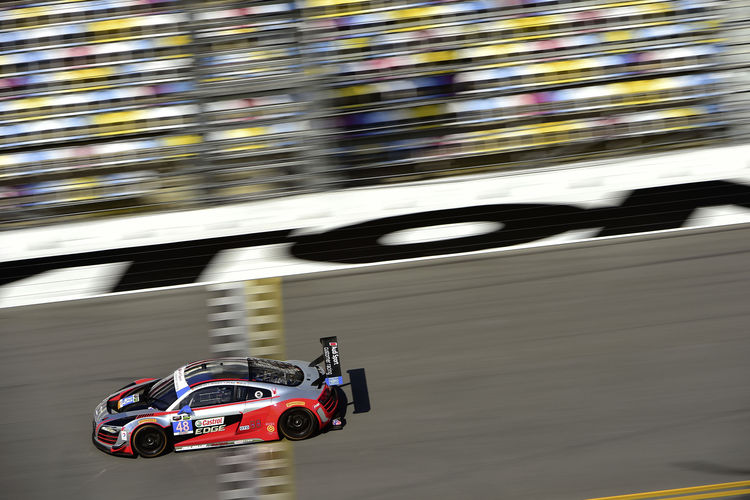 The 2015 season opens with an endurance classic in the USA for Audi customer racing. Two Audi R8 LMS will start at the 53rd running of the 24 hours of Daytona. Following the first victory for an Audi at Daytona two years ago, and a second place last season, the two customer teams Flying Lizard Motorsports and Paul Miller Racing will fight for class honors on 24 and 25 January.

“We will give our customer teams the best possible support so that they can bring home a good result in this race, which is one of the world’s five most important endurance races,” says Romolo Liebchen, Head of Audi Sport customer racing. “I hope that an R8 LMS finishes on the podium again.”

The 24 hours of Daytona is the opening race of the season in the American Tudor United SportsCar Championship (TUSC), which formed in 2014 after the American Le Mans Series and GRAND-AM merged. In the US state of Florida, the two Audi customer teams compete in a field comprised of 53 prototypes and GT sports cars. With 19 cars, the GT Daytona class for production-based sports cars, in which the Audi R8 LMS competes, is the most competitive and numerically strongest. The R8 LMS developed specifically for the US racing series is equipped with modified aerodynamics featuring a wider Daytona Prototype rear wing and new flics at the front to increase the top speed.

“The 24 hours of Daytona seems very long,” explains Markus Winkelhock. “In contrast to the European 24-hour races at the Nürburgring or Spa, in US motorsport you have the opportunity to make up lost laps during the many safety car phases. As a result, no team can build up a big lead, and in the closing stages it’s like a sprint race with everybody fighting for the win. As a driver, you must also be aware of the faster cars in the prototype class and always keep an eye on the rear-view mirror.”

The interest in Audi in the USA is unchecked – not only in motorsport: on the US market, the brand with the four rings grows almost three times as quickly as the entire automobile sales. In 2014, the plus in the US for the premium brand amounted to 15.2 per cent. “Growth potential exists in motorsport as well as for road cars,” says Romolo Liebchen. “In the Pirelli World Challenge, in which GT3 cars complying with the complete FIA specification are allowed, five Audi R8 LMS ultra are already fixed for the 2015 season, other teams have shown great interest.”

In the TUSC, 2015 is seen as a year of transition. “Because GT3 race cars will also be allowed to compete in this series from 2016 onwards, many teams are biding their time this year,” says Liebchen. Currently, Paul Miller Racing plans a complete season in the TUSC; Flying Lizard Motorsports will contest selected races. Ten events are on the agenda for the GT Daytona category.

The Audi customer teams at Daytona