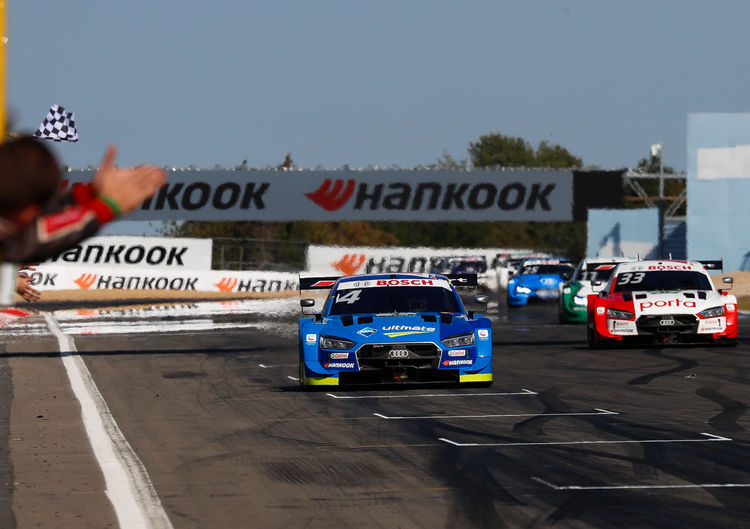 Second victory in a row: following his success on the Grand Prix circuit last Sunday, Robin Frijns from Audi Sport Team Abt Sportsline also won the first of the two DTM races on the Nürburgring’s sprint circuit. The “Flying Dutchman” clinched an extremely rare lights-to-flag victory in the DTM, even though his lead was wiped out three times by the safety car.

“It was pretty nerve-racking in the car today,” said Frijns after his narrow victory ahead of title defender René Rast from Audi Sport Team Rosberg. “Every time I had built up a lead, the safety car came out. When René was directly behind me for the final laps and was able to use Push-to-Pass and DRS all the time, I knew that I couldn’t afford the slightest mistake. My car was great and the key to victory today was my good start.”

From second place on the grid, Frijns won the battle against René Rast, who had secured pole position with an impressive lap in the morning. “The start was decisive,” confirmed the two-time DTM champion. “On Friday, we had a technical problem in the first free practice session and even after the second practice session I was unable to practice a start. Today was my first real start and it was not a good one.”

At times, Rast even dropped back to third place behind BMW driver Marco Wittmann, but then recovered his second place at the last restart and then started chasing the leader in the final stages of the race. “I didn’t want to overtake Robin before the last lap, but maybe I attacked a little bit too late,” said Rast. “It was a very difficult race. A second place is not my goal, but still a good result.”

Rast’s slow start also had an indirect effect on championship leader Nico Müller. “I was stuck behind René, who seemed to have zero grip, so two BMWs overtook me in the first few corners,” said the Swiss. After the first restart, it got even worse for him: “I was squeezed between two cars, was hit from behind and got turned around.” From last place, Müller fought his way up to fifth with an early pit stop and by far the fastest lap of the race, thus defending first place in the drivers’ championship. However, his lead shrank to 13 points. “That’s a bit frustrating, because we definitely had more in the bag today,” said Müller.

Saturday was disappointing for Audi Sport Team Phoenix. Mike Rockenfeller and Loïc Duval were both on fast laps when qualifying was interrupted by a red flag. Having started the race from twelfth and thirteenth on the grid, both were involved in fierce battles. While Rockenfeller scored two hard-fought points for ninth place, Duval had to retire after an off in the hairpin and a collision later on.

Jamie Green also failed to see the checkered flag. The Briton used the third safety car period to get fresh tires for a second time, but suffered a puncture during his comeback drive.

“Wow, what a race!” said Head of Audi Motorsport Dieter Gass. “Robin was outstanding today. He didn’t have a single Push-to-Pass or DRS and still managed to stay in front. That was an extremely strong performance and he also made zero mistakes with all the safety cars and restarts. Fantastic! With second place, René made it a perfect 1-2 victory for Audi. That Nico managed to finish fifth, after being turned around, was mega.”

In the manufacturers’ championship, the lead increased to 426 points. This means that Audi could secure the DTM manufacturers’ title early on Sunday (live on SAT.1 from 1 PM CEST).