{{ activeItem() }}
Twitter
12/02/20
Becoming a provider of networked and #sustainable premium #mobility: Audi increases the budget for electromobility… https://t.co/tIGfgyPJ6H
12/01/20
Your opinion is important to us. Which topics are you interested in on our account? You are welcome to add other topics to the comments.
11/30/20
Unfiltered excitement. Find out Audi's vision of future mobility: https://t.co/PS4RNv0kmG #AudiRS7… https://t.co/B1XUmkjXJT
11/30/20
New challenges ahead: We will be entering the 2022 Dakar Rally with an innovative prototype. #AudiSport… https://t.co/DYwsFPPsuS
Audi on Twitter
YouTube
11/20/20 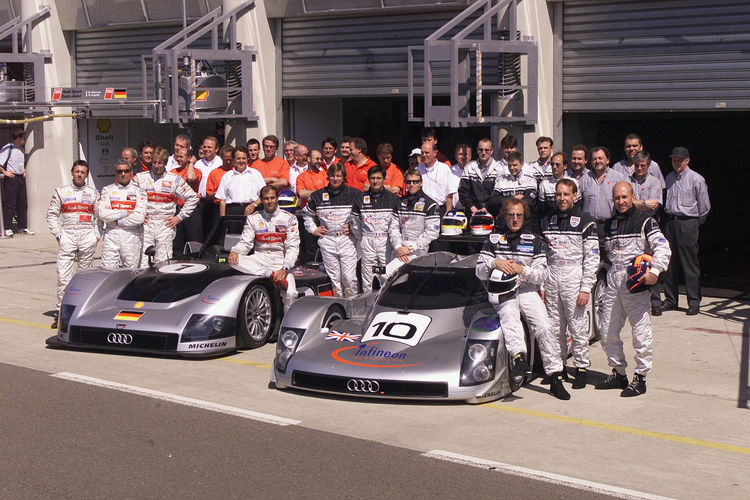 Dr. Wolfgang Ullrich (Audi‘s Head of Sport): "With the two Audi R8Rs, we almost reached the times we‘d calculated. We make big steps forward everyday and people should not forget that we‘re still Le Mans newcomers. Including last month‘s pre-qualifying sessions, this is only Audi‘s third day here. Of course I'm less happy with the performance of the R8Cs. We‘ll quietly analyse on Friday the problems they have encountered so that hopefully the Audi Sport UK team can show their true potential in the race."

Laurent Aiello: "This session was very good. Yesterday the qualifying tyres were not working well but today they improved a lot. Now the car has a very good and fast set-up for the race."

Michele Alboreto: "I’m happy with our performance during qualifying. Now I’m looking forward to the race. Our goal is to make a competitive race."

Frank Biela: "This session was much better. I was quite surprised to drive for two consecutive hours. The car is very comfortable especially with race tyres."

Rinaldo Capello: "I‘m really satisfied with the car today but unfortunetly I did not have a perfect lap. The first set qualifiers worked fine for the first part of the lap while the second set worked well for the second half. Add both together and it would have been a low 3min 34secs."

Emanuele Pirro: "I’m quite confident because we’re not so far away from the front cars. Importantly, on race tyres the car is very good and we experienced no mechanical problems during the two days."

Didier Theys: "I’m happy as we found a pretty good set-up for the race. Everything is fine - I feel confident with the car."

Reinhold Joest (Teamchef): "Now we‘ve found the right balance. The car is very good driveable. On the difficult parts of the track the car is balanced perfectly."

Christian Abt: "I would have liked to have had more laps in the car over the past two days especially as I‘ve never raced at Le Mans before but I‘m very pleased with my lap times. But I learn a lot each lap I make."

Stéphane Ortelli: "The car is now good but I‘m still learning to drive the R8C. Generally the car is easy to drive."

Stefan Johansson: "It has been a hard two nights but let‘s face it, whoever remembers much about qualifying except for the car on pole perhaps – it‘s the race that matters."

Andy Wallace: "We‘ve experienced transmission problems for much of both qualifying sessions but hopefully we‘ve now got rid of our bad luck and we can look forward to having a good race. In the final 15 minutes the car felt really good and the gearbox felt fantastic – I‘m very happy."

James Weaver: "Obviously it has been hard for the past two nights but that‘s motor racing. The car is now perfect – the engine and gearbox both feel good."

Perry McCarthy: "It‘s been tough but all the team have been around a long time and know that in a 24 hour race, the starting position means very little – it‘s a long race."

John Wickham (Team Director): "We‘ve experienced two difficult sessions which has heavily restricted our running. However, I‘m very pleased that both cars are in the race and I‘m sure we can enjoy a good race."