Quotes after the race Zandvoort 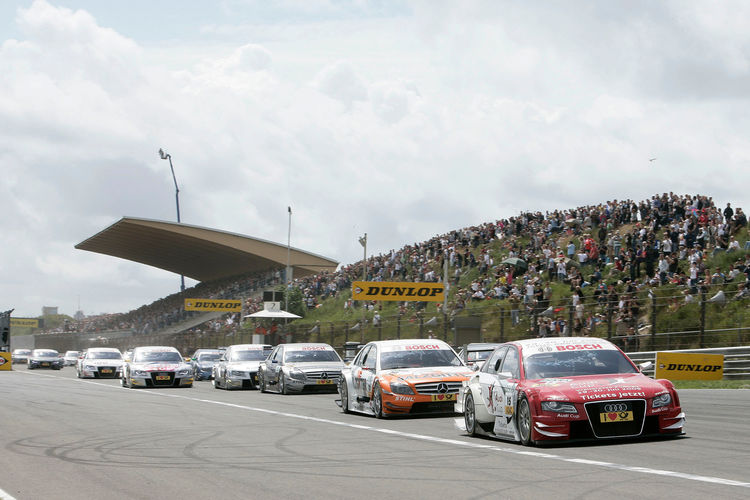 Audi clinched six out of eight possible point-finishes at Zandvoort (the Netherlands). The man of the race from Audi’s perspective was Mattias Ekström, who made up ground from position nine on the grid to second place. The crucial factor in this feat was the strategy of scheduling the first pit stop at a late stage. The quotes after the race at Zandvoort.

Dr. Wolfgang Ullrich (Head of Audi Motorsport)
“Mattias Ekström was very quick today – that was the reason why, in the end, he was one of the front runners. He had the right strategy today and, with a long first stint, put himself in a position of being able to drive clearly faster on the fresher tires than the cars in front of him. On the final laps, he was also much quicker than Gary Paffett. The drivers of our 08-spec cars pitted very early and were therefore struggling with their tires in the end. That they wouldn’t make life difficult for a faster brand colleague and take any unnecessary risk in such a situation is natural at Audi. There are no team orders required for this. Strategy is an important element of motorsport.”

Mattias Ekström (Red Bull Audi A4 DTM #5), 2nd place
“Despite starting so far from the back of the grid I was hoping to be able to move up all the way to the front from the outset. That worked out. My car was very fast today. In the first stint I lost some time and the second pit stop was bungled. But other than that, everything went perfectly. I really pushed hard today.”

Oliver Jarvis (Audi Cup A4 DTM #15), 3rd place
“Today had to be first place, no question about that. I made a stupid mistake which cost everything. In the end, I had no chance left of making up ground on my tires. I even thought I had a puncture.”

Alexandre Prémat (Audi Bank A4 DTM #14), 4th place
“I’m highly pleased. A wonderful race! The start was very good. I quickly moved forward. As far as winning goes: Gary Paffett and Mattias Ekström were simply faster. I want to thank the team for their excellent work. I’m really happy that Olli (Jarvis) and I scored lots of points. And I’m happy for Audi.”

Martin Tomczyk (Red Bull Cola Audi A4 DTM #6), 5th place
“The start worked out like a charm. I was able to make up some places also due to my pit stop strategy. Of course I support my team-mate who has a good place in the championship when I see him. It’s logical to let him pass without obstructing him if he’s faster. That was the case today. Consequently, the race that was unspectacular for me ended in fifth place. That was the maximum I was able to achieve in this situation. Still, I’m pretty pleased because these are my first points this year. The pace in the race was right, that’s why everything was okay.”

Markus Winkelhock (Playboy Audi A4 DTM #12), 6th place
“The race was very good because the starting base from twelfth place wasn’t perfect. It’s very difficult to overtake here. That’s why I thought it would be a difficult race. The start was okay. At first, I didn’t want to take any risk because there were many Audi drivers in front of me. On the first few laps I was running behind Kristensen. I could have driven a little faster. After the second pit stop, I was alone on the track for quite a while. The car was running perfectly during the whole race. The times were really good.”

Timo Scheider (GW:plus/Top Service Audi A4 DTM #1), 8th place
“On the whole, my race was difficult. I had a very good start and was running on the outside in the first corner. However, when exiting the turn I was running into some space problems for the second turn. But the first lap was still okay. Starting from position eleven on the grid there was reason to fear that the car would not remain undamaged in the process. After that, our pace was the way it was. In the end I was caught behind Spengler and, unfortunately, did not find a way to get past him. In retrospect, you’ve almost got to be happy with one point.”

Tom Kristensen (100 Jahre Audi – A4 DTM #2), 11th place
“It was an altogether frustrating race. My car had heavy oversteer from the beginning to the end. That’s why I lost a lot of time. After the first pit stop I hit traffic. Grip on the rear wheels improved because there was more rubber on the track. I lost a lot of time behind Rockenfeller before he left me pass. Unfortunately, that was too late to catch Paul Di Resta on the final laps. Maro Engel was behind me on fresher tires and managed to pass.”

Mike Rockenfeller (S line Audi A4 DTM #11), retirement (tie rod)
“Unfortunately, my race was over soon, even though I drove up to ten laps before race end. I had a good start. In front of me, there was Spengler who immediately went to the right. I tried to directly move to the left, but next to me was Paul di Resta, whom I didn’t see. In the process I damaged my car so heavily that I was no longer able to drive fast. I still tried a few things but when we realized that there was no more chance of scoring points the risk was simply too high. One of the rear tie rods was completely bent out of shape. It was safer to park the car.”

Katherine Legge (Audi Collection A4 DTM # 21), retirement (suspension)
“A weekend to forget for me! In the race, Susie (Stoddart) first hit my car in the first turn, and then Ralf Schumacher did. My car was heavily damaged at the left front and right rear. The car was getting worse and worse. That’s why, unfortunately, I had to return to the pit lane.”

Hans-Jürgen Abt (Team Director Audi Sport Team Abt Sportsline)
“We can be very pleased with the result. Considering our starting positions, we made the best of the situation. It was not enough for victory. But that could hardly have been our goal because it was almost impossible to achieve. ‘Well done’ to Mattias (Ekström). He did a great job of driving. He stayed out extremely long and, in the end, was able to perfectly attack on fresh sets of tires. And – to top it off – in the short time that was left! In addition, the track was very dirty. He handled that really well.”

Ernst Moser (Team Director Audi Sport Team Phoenix)
“The start was perfect: Alex (Prémat) was immediately in fourth place, Oliver (Jarvis) maintained his position. Up to the first pit stop, everything was the way we’d expected it to be. Unfortunately, Oliver then made a small mistake. He briefly got off the track and was no longer able to maintain his position. That was the reason why we didn’t win. Otherwise we could have stayed in front with our strategy. A small mistake is enough to finish just in third place. Still, we’re very happy with the team result. The pace of both cars was very good.”

Arno Zensen (Team Director Audi Sport Team Rosberg)
“It was really too bad for Mike Rockenfeller. Right after the start something was bent on his car after body contact with the Mercedes. That’s when his race actually ended. Markus (Winkelhock) drove a strong race, from grid position twelve to a sixth-place finish. Markus himself was sensational, the strategy worked out perfectly and I can only thank the squad for the pit stops. Congratulations to Audi on achieving the positions from second place on. Ernst Moser’s squad also did a great job of clinching places three and four – ‘Well done.’”

Note to editors:
Due to a subsequent investigation by the race stewards, the results are provisional.