Quotes after the race in Brazil 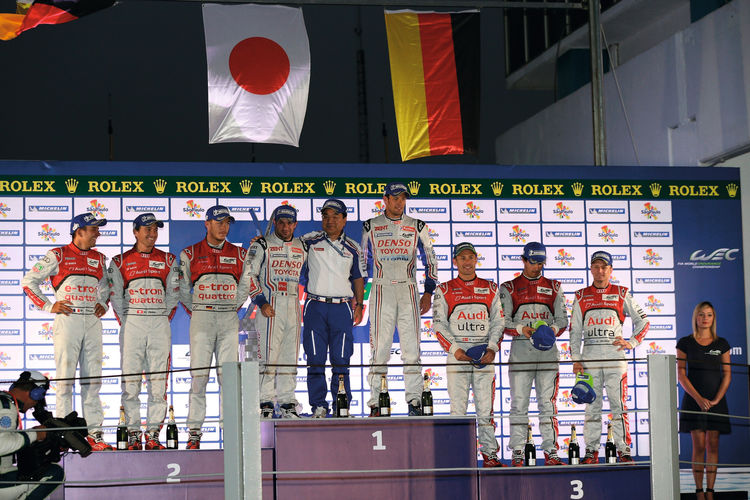 Audi achieved two podium places in the fifth round of the FIA World Endurance Championship (WEC) in Brazil.

Audi achieved two podium places in the fifth round of the FIA World Endurance Championship (WEC) in Brazil.

Dieter Gass (Head of Racing Commitments): “I’d like to congratulate Toyota on their first victory and a flawless performance. Today, I think, we couldn’t have beaten them. The way Lucas di Grassi gelled with the team was very positive. He made no mistakes throughout the weekend although we demanded a lot of him. Towards the end of the race, he even drove the fastest race lap. I’m very pleased with his performance. It confirms that it was a good idea to give him this opportunity. In the race, we were lacking consistency with the tires today. They degraded a bit more across the distance than they did in Toyota’s case. We’ve got to react to that.”

Ralf Jüttner (Technical Director Audi Sport Team Joest): “Congratulations to Toyota on an absolutely flawless race. Our cars ran longer on one full fuel tank but Toyota was faster on average and did a better job of handling the tires. We made no mistakes, the stops were good, all drivers were quick and Lucas left a particularly positive impression on his first run. But driving without making any mistakes and then not winning obviously can’t be our goal. We’ve got to try and improve.”

Marcel Fässler (Audi R18 e-tron quattro #1): “For us, it was important to extend the lead in the drivers’ standings. We managed to do that. But it wasn’t an easy race because our pace wasn’t good enough for winning. We tried to give our best. But we’ve got no reason to be sad after this day either. We’re looking ahead with a positive attitude. The situation in the championship is looking pretty good for us.”

André Lotterer (Audi R18 e-tron quattro #1): “The result was the best we could achieve today. We drove a flawless race but Toyota were simply quicker. Still, we can be pleased because we scored valuable points in the championship. Racing here in Brazil was brilliant. I hope we’ll return.”

Benoît Tréluyer (Audi R18 e-tron quattro #1): “That was a very tough race. My first stint was good but on the second one the tire temperatures were too high. That caused us to lose some time. The safety car period cost us a few more seconds. But we do know exactly what our problem was and will be better again in the next race.”

Lucas di Grassi (Audi R18 ultra #2): “This was an outstanding experience for me. I hope I did the best possible job for the team. I was able to learn a lot from my team-mates. We always gave everything – in practice, in qualifying and in the race. This was sort of a sprint race in which we were driving at the limit through to the end and we finished with a relatively narrow margin behind our sister car. Unfortunately, we had a bit of a gap to Toyota, who deserved this victory. ‘Well done’ to our rivals. A nice battle like this one in a championship is always very special.”

Tom Kristensen (Audi R18 ultra #2): “It was a thrilling and fast race. We knew that we had to give everything because we weren’t driving the hybrid car. Unfortunately, our lap times in the second stint weren’t quite up to Toyota’s. I had two incidents with GT vehicles. In the first one, I had to get out of another car’s way and spun. In the second one, I was pushed onto the grass. Unfortunately, such things happen at times. Except for that, Lucas, Allan and I had a good race.”

Allan McNish (Audi R18 ultra #2): “Congratulations to Toyota on an outstanding performance. We invested a lot of work in the last couple of days to give our car good balance.  In the race, we achieved the maximum possible result with this vehicle. For one lap we were very quick but in traffic the others simply had an advantage.”