Quotes after the race at Le Mans 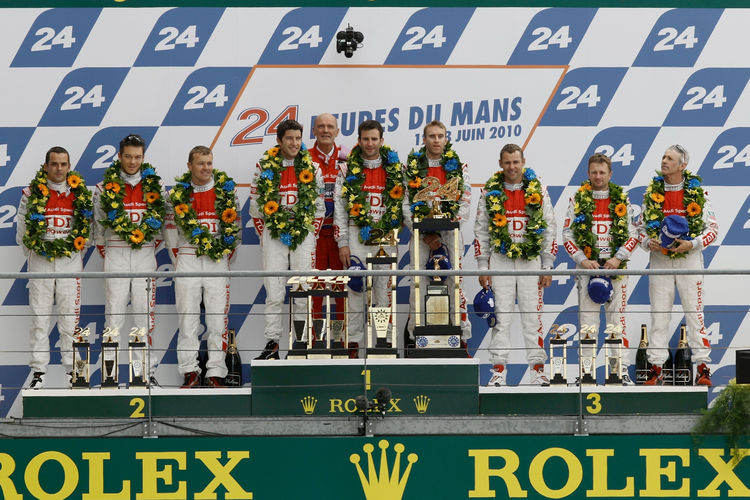 238,400 spectators witnessed another historic Audi victory at Le Mans: the ninth one for the brand, the first one with VTG technology, the eleventh one for the team of Reinhold Joest and the first for Timo Bernhard, Romain Dumas and Mike Rockenfeller. The quotes after the fastest Le Mans race in history.

Dr. Wolfgang Ullrich (Head of Audi Motorsport): “I am convinced that this was the most difficult Le Mans victory for Audi. We had the strongest competitors one can imagine. We did not start the weekend in a perfect way, but we worked together to reach a very good level quickly. From the outset we planned our strategy to do as long stints as possible and we used every opportunity that was offered with efficiency and reliabilty to achieve our goal. All drivers have shown a great performance and brought this historic 1-2-3 victory home for Audi. The team has worked perfectly. Thanks to everyone who made this dream result possible for Audi!”

Ralf Jüttner (Technical Director Audi Sport Team Joest): “I can not even describe my feelings yet. This Le Mans race will go down in history. And not just because of the new distance record. But because we live in motorsport at a time in which the reliability is actually not in question. Nobody retires nowadays. The cars normally last. It's all about who is fast and who is slower. But I have not seen here for ages that such a high pace was demanded. On Friday, I said that I would be happy to watch this Le Mans race as a spectator – just to watch because I was expecting an awsome race. And that's what it has become. We concentrated on our strengths: reliability and consistency. We wanted to apply pressure – and we managed to. We propably forced our opponents to risk more than they wanted. So they got problems. That it would turn out so extreme for them was unexpected. Nobody could have written such a story book as it eventually turned out. These feelings that come up within seconds are gigantic. Team Joest and Audi Sport form a team at Le Mans for years and have now grown so together that I can say: No matter what is to come, I do not worry anymore. No matter what comes back to the pits: A great job is done there. Also the driver teams were strong. There were new drivers here and some that had been with us for the first time last year. The three cars we had were evenly matched this time, which many had missed last year. Everyone was there for one another. When problems arose – and all the difficulties came from the outside, never from ourselves – the others stepped in. Amazing!”

Timo Bernhard (Audi R15 TDI #9): “It's incredible! As a child it was always my dream to go to Le Mans. In 2002 I won the GT class, which was already a first step towards my big goal, the overall victory. The fact that I've achieved this so early at the age of 29, I can not yet really realize. It is crazy! It will probably still take one or two days until I really know what we achieved. We had a great race without any problems on the car. The Audi R15 TDI has been running perfectly. Mike (Rockefeller), Romain (Dumas) and I have been pushing right from the start. This has paid off. In the end the fight with the Peugeot was getting tighter. But I am convinced that we would have kept the lead anyway – over the distance we just had the right package.”

Romain Dumas (Audi R15 TDI #9): “This day is hard to describe. I was sure that there was a chance of winning. Even though the chance might have been small. And this weekend was not only about us drivers. I thank the team,the mechanics and engineers who ensured that everything was great. Thanks also to my teammates. We have shared information among us. We had great help in the race. That was very important. The intelligence of the team was remarkable. All worked together, no one made a mistake. This has paid off in the end. Now we have won the cup back, and that was the goal. I am very satisfied.”

Mike Rockenfeller (Audi R15 TDI #9): “It is simply incredible. I am overwhelmed. It was always my big dream, my goal to win Le Mans. At the beginning I had a difficult time at Audi. Now I’m grateful that they had confidence and believed in me. Finally I managed to win, with Timo (Bernhard) and Romain (Dumas). Thank you to everyone. My thanks to Audi, to the Joest team, our crew. Great!”

Marcel Fässler (Audi R15 TDI #8): “What a result after an awesome race! I think nobody expected a triple victory. Incredible! We said to ourselves: We just have to go steady, make no mistakes, and then there will be some reward for us. But that the reward would be like this no one would have thought.”

André Lotterer (Audi R15 TDI #8): “We did not expect this: first, second and third place! I am not so long with Audi yet but I am happy for everyone, for the brand, for the team. You can not imagine how much effort the mechanics put into this race. How long they work hard for it. Our race was good. We lost a few seconds due to little things. But otherwise everything was perfect. The car ran like clockwork.”

Benoît Treluyer (Audi R15 TDI #8): “A very good result because the race has been difficult. Our opponents Peugeot were very fast. It was challenging, not to make mistakes and still be fast enough. to combine both, was anything but easy. It was not easy for any of the three Audi R15 TDI cars. Now we are all standing on the podium. We are very happy for our team.”

Dindo Capello (Audi R15 TDI #7): “It was a very difficult race. We gave away time during the first race hour just due to the unlucky pace car situation. After that everything was ok. We just tried to stay close to Peugeot and we never gave up, we pushed from the beginning until the end. It was bad luck Tom got caught with the BMW. It cost us the chance to fight for the overall victory – it was impossible for car #7 to do any better. But I’m very happy for Audi. Congratulations to everyone! Today was an awesome result for the four rings.”

Tom Kristensen (Audi R15 TDI #7): “It has been absolutely fantastic for Audi. Le Mans gives and takes. There is triumph, there is tragedy. This year showed it. Personally I am very proud to be on the winning team. Allan (McNish), Dindo (Capello) and I could have been better as we were the leading Audi when I had the incident with Andy Priaulx. But it is a little bit like a soccer team: When we win we win together. And like on a soccer team everybody will be very happy. But the people who will be most happy will be the ones who score the goals. Today it was a deserved win for Romain Dumas, Timo Bernhard and Mike Rockenfeller. They drove very efficiently into the winning circle at Le Mans. And between triumph and tragedy: The car which wins Le Mans is the best car.”

Allan McNish (Audi R15 TDI #7): “I’ve not been involved in a Le Mans like this one in my 10 previous starts. It turned on its head two or three times. From an Audi point of view it was an unbelievable result because we didn’t have the outright pace of Peugeot but Audi had the efficiency and reliability plus the team, structure, drivers and engineers that knew, from experience, how to win Le Mans. The result of our car was dictated by Tom’s incident with Andy Priaulx which was frustrating. But our fight back was intense and we can all be very proud - but that doesn’t mean to say that we can forget about the performance of our French friends as we now must focus on the Intercontinental Cup.”